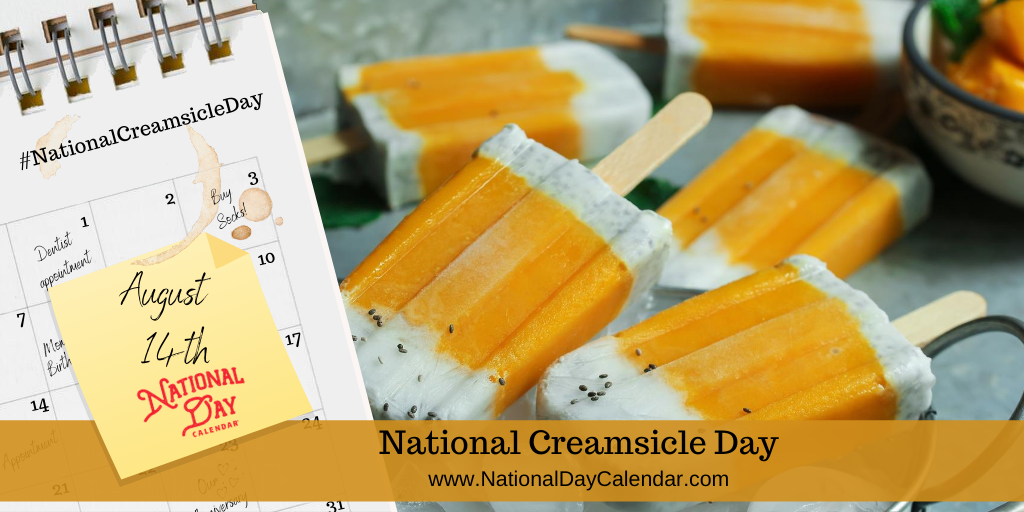 National Creamsicle Day on August 14th celebrates the creamy citrus dessert on a stick. During the height of summer, what better way to enjoy refreshment than with a creamsicle!

“Creamsicle” is the brand name of an ice cream treat. It consists of vanilla ice cream on a Popsicle stick with an outer coating of sherbert. While many other flavors now exist, the original flavor was orange.

Today, recipes abound with creamsicle flavors. From beverages to desserts, the flavor has long been a favorite.

An 11-year-old Frank Epperson inspired the creation when he invented the original popsicle back in 1905. After mixing up a powdered soda, he left the beverage overnight with the stirring stick in it. Temperatures dropped unusually low that night and the next morning, Epperson found the liquid frozen on the stick. He dubbed the creation the Epsicle. Sometime later, he changed the name to Popsicle.

Several generations have enjoyed the fruity, frozen treats and they continue to do so!

HOW TO OBSERVE National Creamsicle Day

Pick up some creamsicles and share them with some friends. Try making a creamsicle-inspired recipe. We’ve provided a couple for you to make. Share your perfected recipes.

We have been unable to find the origins of this holiday.

Q. How many calories are in a Creamsicle?
A. 100 calories.

Q.  Are there different sizes of Creamsicle?
A. Yes. They also come in sugar-free.

Q. Can I make a Creamsicle at home?
A. Yes. We found several recipes online. One you might try is this homemade one from Cindy Shopper.

August 14th Celebrated (and Not So Celebrated) History

The first patent ever issued in Japan went to Hotta Zuisho. Along with Zuisho’s anticorrosive paint, Japan issued seven other patents that day. Zuisho would go on to obtain a U.S. patent for his paint as well.

Congress passes and President Franklin Roosevelt signs the Social Security Act. The sweeping legislation created a pension program based on and supported by workers’ income.

After 10 years of work, the Appalachian Trail from Georgia to Maine is completed. More than 2,000 miles of trails and paths entice hikers from all over the country.

The Student of Prague becomes the first feature-length film to broadcast on BBC television. Many of the themes and subplots are mirrored in the animated film series Shrek.

Japan surrenders and the announcement becomes known as V-J (Victory in Japan) Day.

After a 43 year military career, Rear Admiral Grace Murry Hopper retires from active duty in the U.S. Navy. Known as the “grandmother of the computer age,” Hopper was a pioneer of computer language.

The New York Yankees retire the number of left-handed outfielder Reggie Jackson. Known as Mr. October for bringing in the big hits in the postseason, Jackson earned 5 World Series Championships.

After challenging the all-male admittance, Shannon Faulkner becomes the first woman cadet to attend the Citadel in its 152-year history. However, 6 days later to would leave the military college located in Charleston, South Carolina.

August 14th Celebrated (and Not So Celebrated) Birthdays

Known as a gambler and dentist, Holliday’s given name was John Henry. His associations with Wyatt Earp and other colorful characters earned him a reputation as a gunfighter, too.

Best known for his baseball poem “Casey,” Thayer also worked as a columnist and pursued philosophy.

As a biologist and educator, Just was a pioneer in embryology. He graduated from Dartmouth University and after joining the faculty at Howard University, he would go on to many achievements as the director of the biology department.

While his uncles founded the Ringling Brothers Circus, North made the circus the glamorous show it became.

Known as the “First Lady of the Black Press,” Payne reported on the Civil Rights movement in the Chicago Defender. Her journalism and activism eventually gained her entry as the first African American woman in the White House Press corps.

Humorist, journalist and satirist, Baker wrote for The Baltimore Sun and The New York Times. In 1979, he earned the Pulitzer Prize for commentary.

Playwright Thomas Meehan wrote the books for popular musicals. Three of them, Annie, Hairspray and The Producers, earned him Tony Awards.

Actor and comedian Steve Martin began his career writing comedy sketches that earned him an Emmy Award. He appeared on The Tonight Show and Saturday Night Live several times. His acting credits include The Jerk, All of Me, ¡Three Amigos!, Father of the Bride, and many others.

As an author of romance novels, Steel holds the title of the bestselling author alive. She published her first novel in 1972.

The cartoonist Gary Larson is best known for his syndicated Far Side cartoons.

Horner is one of the best-known composers in the world thanks to his contributions to the movie industry. He earned an Academy Award for Best Music for Titanic. Some of his other scores include Apollo 13, An American Tail, Glory, just to name a few.

For 13 seasons, Earvin “Magic” Johnson played point guard for the L.A. Lakers. He was also a member of the U.S. Olympic Dream Team. His roles on both teams earned him two inductions into the National Basketball Hall of Fame.

Berry has earned both critical and commercial success with a variety of roles in movies and television. Her Best Actress Oscar award came after her role in Monster’s Ball. She also starred in Catwoman, the James Bond film Die Another Day, and Spike Lee’s Jungle Fever.