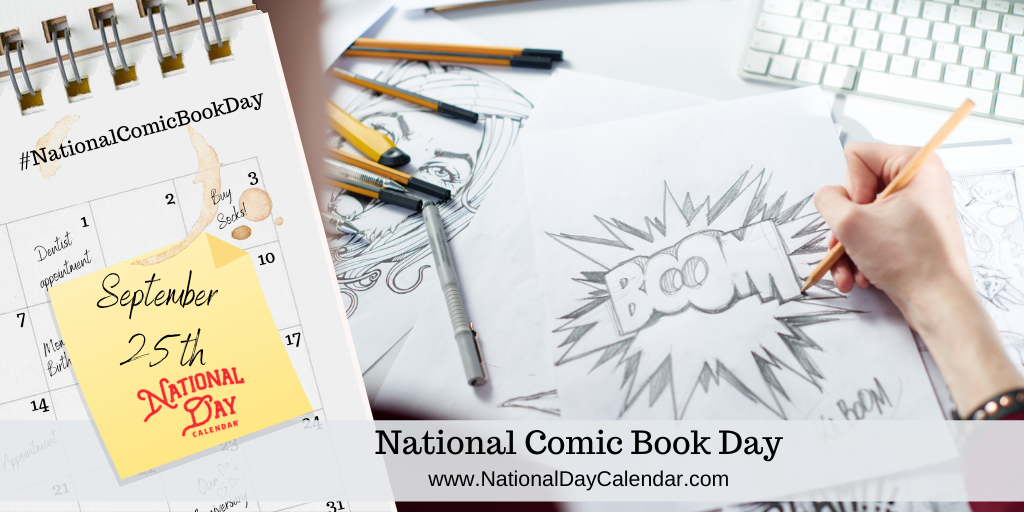 On September 25th, National Comic Book Day honors the art, artists, and stories of comic books. Fans, collectors, readers, and artists come together to celebrate the day with events across the country.

The earliest comic strips (which later gave birth to comic books) displayed dialogue in bubbles or balloons above characters’ heads. As an art form, the designs can be quite intricate. For example, text, dialogue, personalities, color, and imagery enhance part of a storyline. Over time, these storylines also distinguished eras, artists, genres, and themes.

People who collect comic books are known as pannapictagraphist.

The term “comic book” comes from the first book sold as a book reprinted of humorous comic strips. Despite their name, comic books are not all humorous in tone and feature stories in all genres.

One of the earliest known comics printed was The Adventures of Obadiah Oldbuck. The 1842 hardcover comic book became the first known American comic book.

In 1896, Richard Felton drew a comic-book magazine published in the United States featuring The Yellow Kid in a sequence titled “McFadden’s Row of Flats.”  The 196-page book featured black and white print and measured 5×7 inches. It sold for 50 cents.

In 1933, a comic book, Famous Funnies, appeared in the United States. Many believe the work to be the first real comic book. The reprinting of earlier newspaper comic strips established many of the story-telling devices used in comics.

This dynamic art form continues to inspire artists and storytellers today. There are also so many ways to celebrate the day:

Maybe you’ll discover a great find. Learn about the careers of Steve Ditko, John Buscema, Curt Swan, or Carmine Infantino. Tell us who your favorite comic book artist or storyteller is.

Pick up a comic book to read and use #NationalComicBookDay to post on social media.

Educators, visit the National Day Calendar classroom for projects designed to include the days in your classroom.

National Day Calendar continues searching for the source of this artistic day.

Q. What are the different types of comic books?
A. Comic books come in as many genres as novels do. The genres also fall into both fiction and non-fiction categories. Some of them include:

Q. Does the calendar include other comic book-related holidays.
A. Yes! Comic books are also celebrated on: