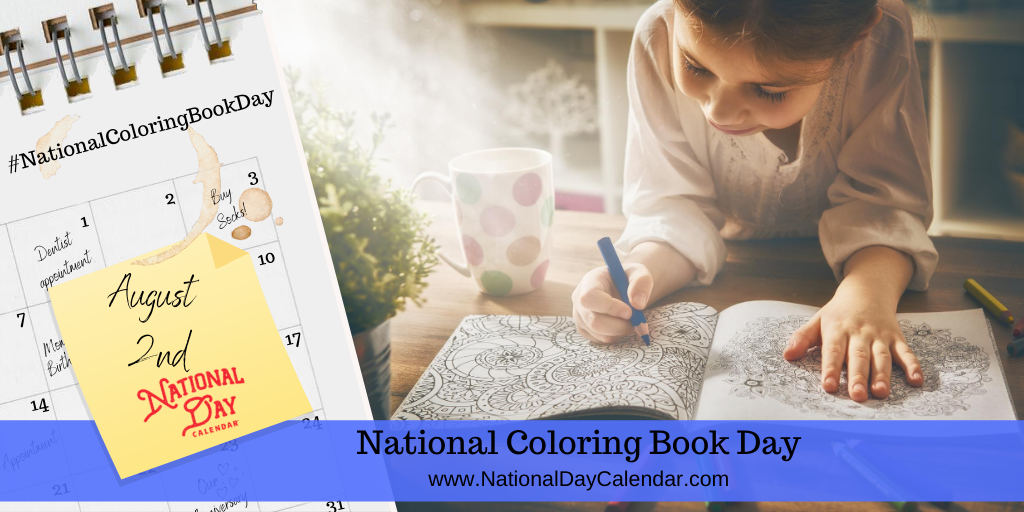 Coloring and coloring books have always been popular with children, but over the years, adults have gotten more and more involved with coloring. Obviously, adult coloring is now a huge trend. Many find that it is not only fun but also a great way to reduce stress.

With so many colors and designs to choose from, coloring offers enjoyment in so many settings. They’re portable and come in a variety of sizes. Take coloring books on vacation with you for rainy days or to document a fun memory.

Coloring books also make great gifts all year long. When someone visits, be sure to leave a coloring book and colors in the guest room for downtime. At the office, keep a variety of books in the breakroom for co-workers to fill up.

Go find a coloring party near you or participate online. Spend some time coloring with your friends, children, or grandchildren or by yourself. Enjoy the creativity of making a picture come to life. Download the official #NationalColoringBookDay 2021 color page.

You can also check out the coloring pages in the National Day Calendar Classroom.

Share your ideas for coloring books and post your pictures on social media using #NationalColoringBookDay to encourage others to find enjoyment in coloring.

The Registrar at National Day Calendar declared the day to be observed annually on August 2nd.

During his quest to find the Northwest Passage, Henry Hudson’s ships sailed up a large river on the eastern shore of North America. The river and bay would eventually be named after him.

While delegates from the 13 colonies formally approved the Declaration of Independence on July 4, 1776, it wasn’t signed by the delegates until August 2nd. However, not all the delegates signed on that day. Many signed days later and some, not at all.

Charles Guille becomes the first person to parachute in the United States. He ascended up into the sky using a hot air balloon, and when he reached the desired altitude, Guille cut his basket loose from the balloon. His parachute unfurled and Guille drifted to the Earth, basket and all, before a crowd of thousands at Vauxhall Gardens in New York City.

The first underground subway, the Tower Subway opens to the public. Tunneled deep beneath London’s River Thames, the subway’s original purpose of allowing wheeled traffic was soon abandoned to foot traffic only. While not used for public transportation of any kind, the tunnel provides a pathway for utilities.

The United States Mint issues the first Lincoln penny to the public. On one side, the penny displayed the profile of President Abraham Lincoln along with the words “In God We Trust” and “Liberty” and the year 1909. On the flip side, two stalks of wheat graced the coin along with the phrase “E. Pluribus Unum” across the top and the words “ONE CENT” and “UNITED STATES OF AMERICA” in the center.

The 29th President of the United States, Warren G. Harding, dies of a heart attack.

Magic by Olivia Newton-John hits #1 on the Billboard Hot 100 and stays there for four weeks.

The Gulf War begins with the bombing of Kuwait City by Iraq.

The central design for Washington D.C. was laid out by this French-American architect.

The American physician scientifically answered the often asked question, “Why is the sky blue?”. He also discovered the properties of air in the atmosphere and the greenhouse effect.

This French sculptor is best known for designing the Statue of Liberty.

Best known for her roles in The Thin Man, The Great Ziegfeld, and Cheaper by the Dozen, Loy also was known for her activism during World War II.

Best known for his role as Lawrence of Arabia in the film by the same name, O’Toole also starred in numerous other award-winning films.

The American filmmaker, actor, and novelist is best known for his eerie horror films. Among his many credits are A Nightmare on Elm Street, Scream and The Hills Have Eyes.

Kathy Lennon was the second youngest sister in the vocal group The Lennon Sisters.

The self-taught American printer and typographer designed his first typeface in 1897. In his lifetime, he would create over 100 different fonts.

The Los Angeles Superior Court judge is best known for presiding over the People of the State of California v. Orenthal James Simpson case in 1995. During the much-publicized murder case, Judge Ito became a household name.

Historian and author, Carr has published several books including The Alienist, The Angel of Darkness, Killing Time, and several more.

Best known for her role as Ruth Jamison in Fried Green Tomatoes, the versatile actress also played numerous other roles. Her long list of credits includes state productions as well.