Whether getting one to go or lingering over a second cup, on September 29th be sure to observe National Coffee Day!

Ah, the perfect cup of java.  According to an expert cupper (a professional coffee taster), there are four components of a perfect cup: aroma, body, acidity, and flavor.

From the moment the average coffee lover opens a fresh bag of coffee beans, the aroma beckons, percolating the senses. Even those who don’t drink coffee tend to enjoy the fragrance roasted beans cast.

When determining the body of a coffee, the bean, the roast, and the brew are all factors. The bean affects the texture of the coffee, whether its silky, creamy, thick or thin on the tongue and throat. However, the darker the roast and how we brew it will alter the feel of a coffee’s body, too. Grandpa’s motor oil blend versus the coffee shop around the corner’s silky smooth, well-practiced grind have entirely different bodies.

Where a coffee bean grows determines its acidity. The higher the elevation the coffee grows, the higher the quality and the acidity. These coffees are considered brighter, dryer, even sparkling by cuppers.

When it comes down to it, coffee lovers cherish the flavor as well as the caffeinated boost this roasted bean gives morning or night, black or with cream and sugar. Hot or cold it provides enjoyment even when decaffeinated!

Many legendary accounts tell how coffee first came to be. However, the earliest credible evidence of either coffee drinking or the knowledge of the coffee tree appears in the middle of the 15th century in the Sufi monasteries around Mokha in Yemen.  Here, monks first roasted coffee seeds and brewed coffee, much like we prepare them today. Yemeni traders brought coffee back to their homeland from Ethiopia and began to cultivate the seed.

In 1670, Baba Budan smuggled coffee seeds out of the Middle East by strapping seven seeds onto his chest. The first plants grown from these stowed away seeds were planted in Mysore. Coffee later spread to Italy and the rest of Europe, Indonesia, and the Americas.

While Brazil produces more coffee in the world than any other country, Colombia closely follows. Also, more than 50 countries around the world grow coffee, too. As a result, we choose from a bountiful selection of flavors for the indulgence of steamy cups of the black drink for connoisseurs to consume. 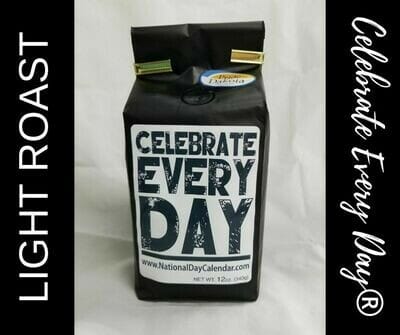 Enjoy a cup or two of your favorite coffee. Here is a Coffee Brewing Guide to help create your own. Want to learn more about Coffee History? We’ve collected 11 Historic Coffee Milestones for you to savor. Use #NationalCoffeeDay to post on social media.

Get your official National Day Calendar® Celebrate Every Day® coffee by ordering today! We have four different roasts ready to satisfy every coffee celebration all year long!

Visit the Celebration Deals page for a listing of the best offers across the country.

Q. How long does the caffeine in coffee stay in my body?
A. Caffeine from coffee (or any caffeinated beverage) can remain in the body for up to 6 hours after consumption. While it may seem it’s effects have worn off, a cup of coffee consumed at 5 pm can still cause difficultly falling asleep if you like to go to bed early.

September 29th Celebrated (And Not So Celebrated) History

U.S. patent No. 1111999 is granted to Thomas Edison for the phonograph record.

The Amateur Athletic Union admitted women to the track & field championships for the first time.

“Kiss my grits!” The television sitcom Alice debuts on CBS.

NASA launches the space shuttle Discovery from Cape Canaveral, FL. It is the organization’s first manned flight since the Challenger disaster on January 28, 1986.

“Quack, quack!” Het Poetsbureau set a world record when 1,476 people folded towels into the shape of a duck, setting the record for the most people making towel animals. The professional cleaning service, based in Antwerp, Belgium, hosted the event in Hasselt, Belgium.

The world’s largest popcorn ball weighs in at 3,423 pounds breaking the previous world record. The brainchild of Tim Hopkins of The Popcorn Factory in Lake Forest, IL, the popcorn ball took only eight hours to build. However, from the initial concept to completion took several weeks of planning.

September 29th  Celebrated (And Not So Celebrated) Birthdays

Yale became a leader in deaf education during her tenure at the Clarke School for the Deaf. She developed a system of phonetic symbols, improving upon the system created by Alexander Melville Bell. She also established training programs and established the American Association to Promote the Teaching of Speech to the Deaf.

The founder of AeroVironment also designed human-powered aircraft such as the Gossamer Condor and Gossamer Albatross. The latter crossed the English Channel in 1979.

The shortstop played five seasons in the All American Girls Professional Baseball League. She was nominated to the All-Star team twice during her career. Following her baseball career, she pursued a career in physical education.

The Emmy-winning television journalist co-hosted the Today show from 1982 to 1997. In 1995, he also began sportscasting for HBO.