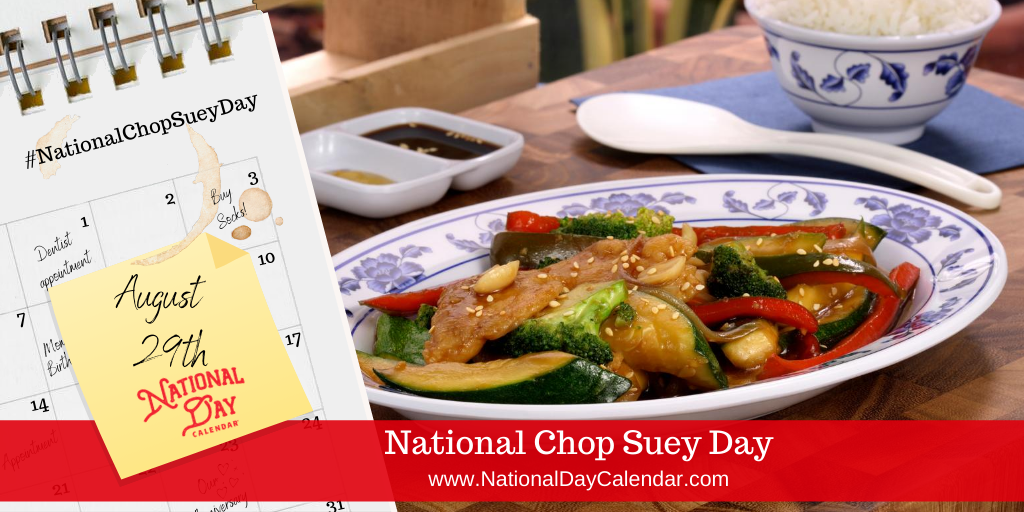 Chop suey, which means assorted pieces, is a dish in American Chinese cuisine. The main ingredients include meat (chicken, fish, beef, prawns or pork) and eggs. As the meat cooks over high heat, add vegetables (usually bean sprouts, cabbage, and celery). The dish is bound in a starch-thickened sauce. Typically, rice accompanies the flavorful dish, too.

According to food historian Alan Davidson, chop suey is “A prime example of culinary mythology.” These food myths happen with popular foods. Below we illustrate several colorful and conflicting stories telling of chop suey’s possible origin.

Some believe chop suey was invented in America by Chinese Americans. However, anthropologist E.N. Anderson finds another conclusion. According to Anderson, the word tsap seui means miscellaneous leftovers and hails from Taishan, a district of Guangdong Province. Many early Chinese immigrants traveled from their home in Taishan to the United States.

Another account claims Chinese American cooks who were working on the transcontinental railroad invented chop suey in the 19th century.

A prime example of culinary mythology. ~ Alan Davidson on the origin of chop suey.

One tale stemming from the Quing Dynasty connects to premier Li Hongzhang’s visit in 1896. According to the story, his chef wanted to create a meal suitable for both the Chinese and American palates. Another version of the story tells that Li wandered to a local Chinese restaurant after the hotel kitchen closed. Despite feeling embarrassed because he had nothing prepared to offer, the chef made a dish for Li. Comprised of leftover scraps, the chef created the new “chop suey” dish.

Still another myth tells of an 1860s Chinese restaurant cook in San Francisco. When drunken miners arrived after hours, the chef avoided a beating thanks to some quick thinking. He threw leftovers in a wok, providing a makeshift meal to the miners. The miners loved the dish, asking him for the name of the entree. To which the chef replied, “Chopped Sui.”

Traveling to the United States in 1903, Liang Oichao, a Guangdong native, wrote that there existed a food item called chop suey. While regularly served by Chinese restaurateurs, the local Chinese people did not eat this dish.

Of course, the directive of the day would be to enjoy some chop suey. But why stop there? Dive into these suggestions:

Be sure to use #NationalChopSueyDay to post on social media.

National Day Calendar continues researching the origins of this elusive food holiday. However, one of the above origin stories places the invention on August 29, 1896.

Q. Is chop suey a type of stir fry?
A. Yes. Stir fry is a type of meal prepared over high heat while being stirred frequently, and chop suey is prepared this way.

August 29th Celebrated (and Not So Celebrated) History

August 29th Celebrated (and Not So Celebrated) Birthdays