When it comes to a National Day, a chocolate-covered raisin or a box of them is worth celebrating. On March 24th, National Chocolate Covered Raisin Day celebrates raisins coated in a shell of either milk chocolate or dark chocolate.

More than 1 million Raisinets are produced per hour.

In some countries, chocolate-covered raisins are known as Raisinets. Raisinets produced the first and one of the most popular brands of the product. Currently made by Nestle, they are the third-largest selling candy in United States history.  The Blumenthal Chocolate Company introduced the Raisinets to the United States in 1927, and then in 1984, Nestle acquired the brand. However, a large number of other brands produce chocolate-covered raisins for us to enjoy.

Raisins are an excellent source of calcium, potassium, iron, fiber, and vitamin B.  When you combine the raisins with dark chocolate, you have a great-tasting, healthy snack. 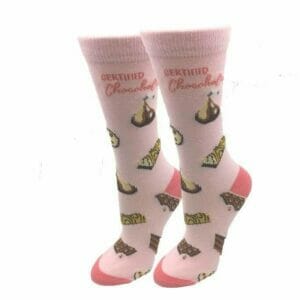 Wear your love of everything chocolate wherever you go! Get your Certified Chocoholic socks from National Day Calendar®. Want to #CelebrateEveryDay? See all the ways you can celebrate here.

National Day Calendar continues to research the origins of this snack food holiday.

Q. What kinds of chocolate are raisins covered in?
A. Raisins can be covered in either white, milk, or dark chocolate.

March 24th Celebrated (and Not So Celebrated) History

Robert Koch reports that he isolated and grew tubercle bacillus.

The Exxon Valdez spills 270,000 barrels of oil into Alaska’s Prince William Sound causing the worst oil spill in history. The environmental and economic costs were devastating.

Eugene and Carolyn Shoemaker and David Levy discover a comet orbiting Jupiter when they take a photograph using a Schmidt telescope.

Halle Berry wins the Academy Award for Best Actress for her role in Monster’s Ball. It is the only time the Academy has awarded an Oscar to an African American leading lady in its history to date.

March 24th Celebrated (and Not So Celebrated) Birthdays

One of the world’s most renowned magicians, Harry Houdini was known for his escapology. Houdini developed a range of stage magic tricks and made full use of a variety of conjuring techniques. They included fake equipment and collusion with individuals in the audience. He was both a savvy businessman and an exceptional showman.

During the Civil Rights Movement, Height played a pivotal role, serving as president of the National Council of Negro Women. She spoke on behalf of both African Americans and women in her efforts for equality. Height has been the hero of many generations of racial minorities as she advised presidents and government committees. Three presidents honored her with medals. The first in 1989, President Ronald Regan presented Height with the Citizens Medal Award. In 1994, President Bill Clinton presented her with the Medal of Freedom. President George Bush honored her with the Congressional Gold Medal in 2004.

The Emmy-winning American comedian and actor developed his career throughout the 1980s, ’90s, and early 2000s. Anderson earned his first two Emmy’s for an animated series he created and produced for Fox in 1995 called Life with Louie. In 2016, he landed the role of Christine Baskets on the comedy series Baskets. The role led to his third Emmy win.

The award-winning American Actor is best known for his role as Sheldon Cooper in the long-running comedy series The Big Bang Theory. He can also be seen in The Boys in the Band, Hollywood, and A Kid Like Jake.

The American quarterback played 18 seasons in the National Football League. Manning played his first 14 seasons with the Indianapolis Colts during his career. In 2007, he led the Colts to a Super Bowl win, beating the Chicago Bears 27-17. Manning became a Denver Bronco in 2012. He would bring home his second Super Bowl ring in 2016 by defeating the Carolina Panthers 24-10.