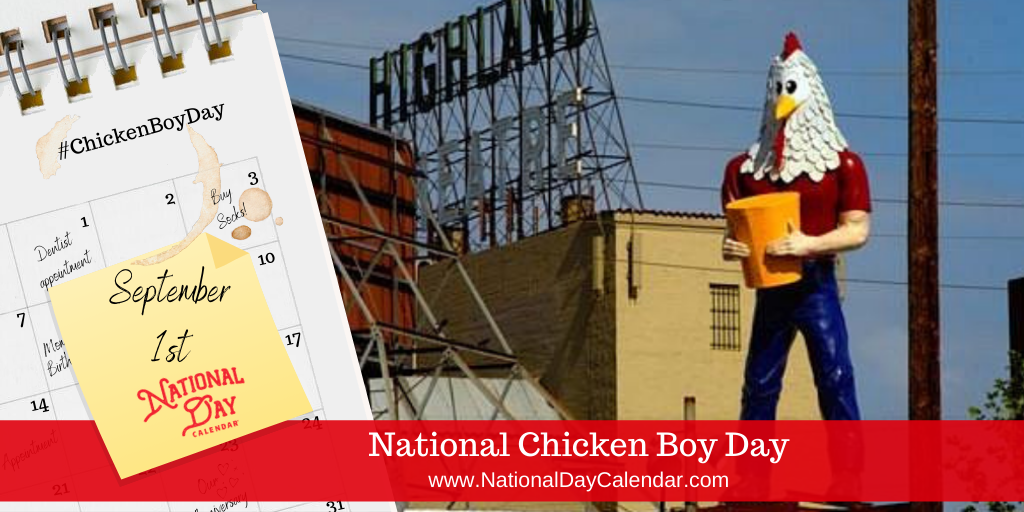 On September 1st, National Chicken Boy Day honors the birthday of an interesting statue in California. Celebrate his ceremonial birthday and learn more about this unique creation.

Chicken Boy stands 22 feet tall and holds a bucket of chicken. The fiberglass statue of a boy with a chicken head can be seen along Route 66. He is named after the former 1960s Chicken Boy Restaurant. Also known as the “Statue of Liberty of Los Angeles,” he joins other notable food characters, such as Big Boy and Ronald McDonald.

When is National Paul Bunyan Day?

The iconic statue remained in place at the restaurant until the owner died in 1984. At that time, Chicken Boy was given to Los Angeles art director, Amy Inouye. For a time, the statue remained cooped up in storage. However, over 20 years later Chicken Boy flew the coop. He now graces the property of Inouye’s design firm. The entire community came together to make the restoration of Chicken Boy possible, too. His restoration and display are partly due to the catalog of items Inouye offered for purchase Chicken Boy-themed items for fans to enjoy.

The feathered boy not only attracts visitors, but he also has a documentary and a polka song named after him. In addition, he and Inouye have also received several awards.

Wing it! Or wish Chicken Boy a Happy Birthday. We also suggest a few other activities to enhance your celebration.

If you do any of these, share a photo or video using #ChickenBoyDay to post on social media.

National Day Calendar has been unable to identify the founder of the day. However, the celebration does commemorate the statue’s birthday.

Q. Are there other statues along Route 66?
A. Yes! Muffler Man, Paul Bunyan, Cadillac Ranch, and many more!

Q. Where can you visit large outdoor roadside sculpture displays?
A. Outdoor sculptures are a popular roadside attraction. Here are some of the largest in the United States:

September 1st Celebrated (and Not So Celebrated) History

The Whitechapel Foundry delivers The Liberty Bell to the State House in Philadelphia, PA. However, the bell remained in storage until 9 months later. At that time, a single stroke of the clapper created a crack in the bell.

The first telephone operator, Emma Nutt, ushered in the era where women would dominate the job. She worked for the Edwin Holmes Telephone Dispatch Company in Boston. Alexander Bell suggested replacing the boys operating the phone lines with a calm, soothing female voice.

The world’s last known passenger pigeon dies at the Cincinnati Zoo and Botanical Gardens. Named Martha, she came to the zoo as part of a preservation effort that came too late.

Forrest E. Mars introduces the Mars Bar. The original Mars candy bar was made of nougat and caramel coated in chocolate. However, when it made its U.S. debut, the bar comprised a different formula. It is all very confusing.

Metro-Goldwyn-Mayer releases its first animated cartoon. The Discontented Canary features the story of a caged canary who flees to freedom only to face multiple obstacles including weather and a cat. Don’t confuse the character with Tweety Bird. The Looney Toons character was born into the animated world a free bird.

The British journalist Clare Hollingworth is the first to report the outbreak of World War II. She scooped the story by being in the right place at the right time, reporting the scores of troops building up on the German Poland border.

Ernest Hemingway publishes the novel The Old Man and the Sea. The story tells the tale of an old fisherman who makes his greatest catch late in life. It would be Hemingway’s last great work published during his lifetime.

Paramount releases Rear Window, directed by Alfred Hitchcock. The film starring James Stewart and Grace Kelly follows a voyeuristic photojournalist as he suspects one of his neighbors of committing murder. The film earned four Oscar nods.

Twice-Told Stories is released to theaters. The film stars Vincent Price in multiple roles and re-tells the stories written by Nathaniel Hawthorn.

NASA’s Pioneer 11 completes its first flyby of Saturn. It’s the first spacecraft to study the planet up close.

The Cartoon Network, owned and operated by Turner Japan, begins airing in Japan.

September 1st Celebrated (and Not So Celebrated) Birthdays

The author is best known for his novel Moby Dick. He also wrote short stories and poetry.

Living in an era fascinated by flight, the prolific German inventor pioneered some of the first helicopters. He also invented a human-powered airplane and motorcycle, among other creations.

Living through 17 U.S. Presidents, the American journalist began her work as a reporter in 1942. Among her many achievements, Carpenter served as Vice President Lyndon B. Johnson’s administrative assistant. She also co-founded the National Women’s Political Caucus.

He is the only professional box to finish his heavyweight career undefeated. During his career, he faced several notable opponents including Joe Frasier and Don Cockell.

The American actress and comedian is known for her wacky characters. Some of her characters include Ernestine the telephone operator and the insightful child Edith Ann. Tomlin also starred in movies such as 9 to 5 and Prairie Home Companion. Her most recent work includes the popular Netflix sitcom Grace and Frankie.

Best known for doling out advice on his talk show, Dr. Phil, McGraw was a licensed clinical psychologist until 2006.

The Cuban-American singer and dancer rose to the top of the charts with the Miami Sound Machine.