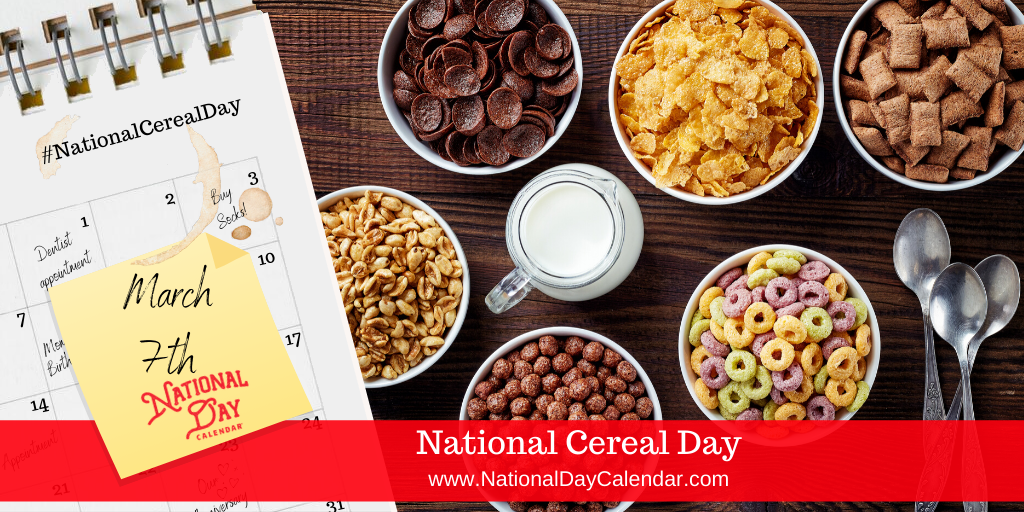 March 7th urges us to get our bowl spoon ready for National Cereal Day each year! Since the end of the 19th century, cereal has become America’s most popular breakfast food.

Now, not only is cereal eaten for breakfast, but it has become a popular bedtime snack. Some people even enjoy a bowl for an evening meal. Bakers turn to cereal in their cake, cookie, and bar recipes. The most popular one is Rice Crispy Bar Treats.

Ferdinand Schumacher, a German immigrant, began the cereal revolution in 1854 with a hand oats grinder in the back room of a small store in Akron, Ohio. His German Mills American Oatmeal Company was the nation’s first commercial oatmeal manufacturer.  In 1877, Schumacher adopted the Quaker symbol, the first registered trademark for a breakfast cereal.

Granula, the first breakfast cereal, was invented in the United States in 1863 by James Caleb Jackson, operator of Our Home on the Hillside, which was later replaced by the Jackson Sanatorium in Dansville, New York.  The cereal never became popular since it was inconvenient as the heavy bran nuggets needed soaking overnight before they were tender enough to eat.

Do you remember mornings eating a bowl of cereal, reading the back of the box and trying to find the toy inside the box?

The cereal industry rose from a combination of sincere religious beliefs and commercial interest in healthy foods. Dr. John Harvey Kellogg experimented with granola.  He boiled some wheat, rolled it into thin films, and baked the resulting flakes in the oven; he acquired a patent in 1891.  In 1895 he launched Cornflakes, which overnight captured a national market.

In 1906, Dr. John Harvey Kellogg’s brother, William K. Kellogg, after working for John, broke away, bought the corn flakes rights from his brother, and set up the Battle Creek Toasted Corn Flake Company.  His signature on every package became the company trademark and insurance of quality.

Because of Kellogg and Post, the city of Battle Creek, Michigan is nicknamed the “Cereal Capital of the World.”

After two scoops, a prize, and a second helping, the identity of the day’s founder has fruit us for a loop. We tried boo berry hard. If it were a life mission, perhaps it would be more than just trix for kids. However, we figure if we snap, crackle, and pop a few more times, we might cereously score the lucky charms we krave that will lead us to the answer. It might seem corny, but our capt’n crunches in the research department!

Q. Who’s idea was it to give away prizes with cereal?
A. Look to the original cereal makers for that answer. Dr. John Harvey Kellogg tempted kids to eat his cereal with a prize in exchange for a mailed proof of purchase. However, soon the prizes were being included inside the box.

March 7th Celebrated (and Not So Celebrated) History

The U.S. Patent Office issues patent no. 174,465 to Alexander Graham Bell for the telephone.

As American civil rights activists campaigning for voting rights march across Edmund Pettus Bridge in Selma, Alabama, on their way to the state capitol, state troopers and local police use nightsticks and teargas to turn them back. The day became known as Bloody Sunday and a turning point in the Civil Rights movement.

March 7th Celebrated (and Not So Celebrated) Birthdays

In 1895, Palmer performed the first chiropractic adjustment and is considered the founder of chiropractic. He would later establish the Palmer School and Cure in Davenport, Iowa. It is now known as the Palmer College of Chiropractic.

In 1919, Helen Dalton developed the individual learning plan called the Dalton Plan and introduced it at a school for the handicapped. She then applied the model to the Dalton High School in Dalton, Mass.

Small things greatly. Oseola McCarty always wanted to be a nurse and while her dream never came true, it didn’t stop her from making it a possibility for others. In 1995, she left $150,000 to the University of Southern Mississippi in the hopes that others may have an education. The university established the Oseola McCarty Scholar Program and Scholarship.

Before becoming NBC’s Today show weatherman and birthday well-wisher, Scott was the original Ronald McDonald for the hamburger franchise.

The American author and screenwriter is best known for the novels American Psycho and Less than Zero.