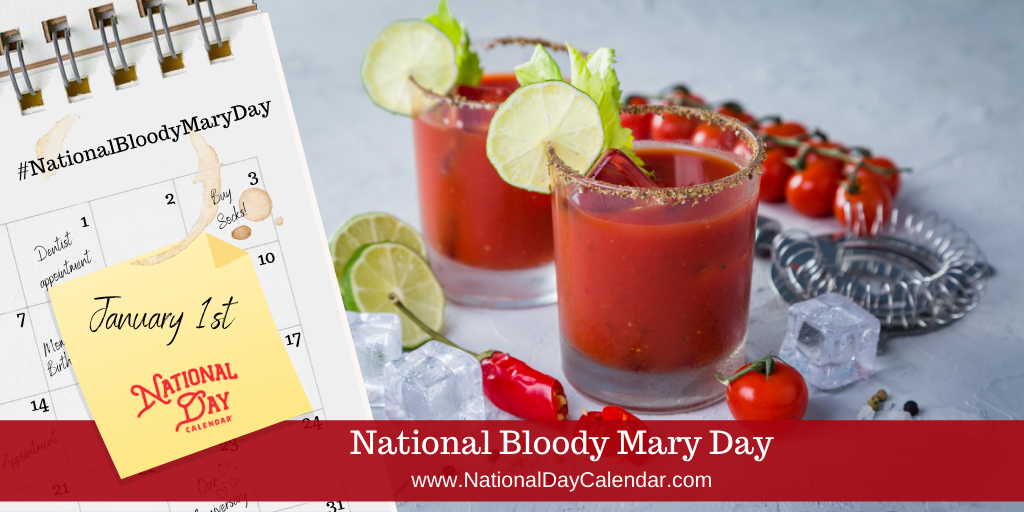 For all those who celebrated more than they should have, National Bloody Mary Day serves up one of the world’s most popular hangover cures on January 1st.

It would seem the Bloody Mary is the product of several hard day’s nights, lackluster cocktails, and seemingly tasteless liquor.

When the Russian Revolution pressed fleeing men into Paris and to Harry’s Bar at The Ritz Hotel, bartender Ferdinand “Pete” Petiot mixed up a cocktail that eventually made its way to post-prohibition America.

According to Food and Drink in American History: “Full Course” Encyclopedia by Andrew F. Smith, the Bloody Mary made its debut in Paris at The Ritz Hotel in 1921. Originally named the Bucket of Blood, it also went by the name Red Snapper. Petiot later left Paris and introduced the vodka, tomato juice, lemon juice, Worcestershire, cayenne, and salty cocktail to the New York King Cole Bar scene when prohibition ended.

Some attribute the name to the notorious Queen Mary Tudor, who executed hundreds of Protestants in the name of Catholicism during her short five-year reign from 1553 to 1558. Others claim Petiot’s girlfriend of the same name receives the credit.

Today’s Bloody Marys includes a variety of ingredients from pickles, olives, and celery to bacon, horseradish, tobacco, and peppers.

Enjoy a Bloody Mary. Select your favorite combinations and get ready for the new year. Have you tried pickled beans or asparagus? Like its cousin, the Bloody Caesar, the drink has become a smorgasbord of beverage bar. After a while, we begin to wonder whether we order it more for the liquid contents or the edible ingredients. However, if each additional component starts the New Year off right, the day is worth celebrating. Right?

Of course, the best way to celebrate the day is with friends. And remember to drink responsibly and never drink and drive. Use #NationalBloodyMaryDay to share on social media.

As we ponder the origins of this holiday, National Day Calendar staff will nibble on the contents of the beverage. There’s a little something for everyone – a pickle, celery, olives. Oooh, bacon!

Q. What other kinds of cocktails use tomato juice?
A. Tomato juice goes well with a variety of spirits. That’s one of the reasons the Bloody Mary tastes so good. Other cocktails to try include:

Q. Do I have to add vodka to a Bloody Mary?
A. No. Virgin Bloody Mary’s quite tasty, too.

January 1st Celebrated (and Not So Celebrated) History

The first immigrants pass through the doors of the Ellis Island Immigration Station. Ellis Island replaced Castle Garden as the new landing depot for immigrants entering the United States via New York.

The Hewlett Packard Company is founded in a garage in Palo Alto, CA by Bill Hewlett and Dave Packard.

The Joint Commission on Accreditation of Healthcare Organizations (JCAHO) mandated hospitals to include no-smoking policies indoors or risk losing accreditation. Loss of accreditations places hospitals at risk of losing Medicare and Medicaid reimbursement.

January 1st Celebrated (and Not So Celebrated) Birthdays

The American patriot is best known for his midnight ride to alert other patriots of British troops. However, a poem by Henry Wadsworth Longfellow leaves out a few names, including William Dawes, Samuel Prescott, Israel Bissell and possibly one other. The last one, Sybil Ludington, leaves some doubt in the mind of historians as no record of her ride exists until much later.

The younger brother of the founder of Holt Brothers Company, Benjamin Holt invented the first tractor to use tracks instead of wheels.

After joining the Women’s Auxiliary Air Force (WAAF) during World War II, Khan was recruited as a Special Operations Executive (SOE) to be a radio operator for the resistance network in occupied Paris. Her mission was to send coded messages back to London. In 1943, the Germans captured her, and they later executed her.

The American author is best known for the coming of age story The Catcher in the Rye.