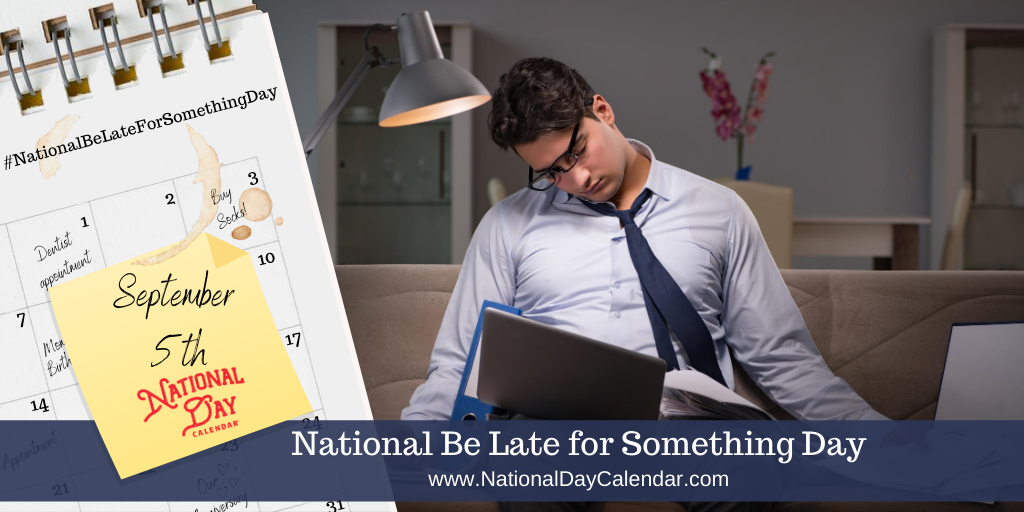 NATIONAL BE LATE FOR SOMETHING DAY

On September 5th National Be Late for Something Day permits us to not abide by our schedules. Go ahead and sleep in a little bit today as you have an excuse.

The holiday aims to promote the positive parts of procrastination. For example, those who focus more on spending quality time with customers and family versus being punctual seem less anxious overall.

“Most people think they don’t have time to stop and smell the roses. This day tries to alleviate that factor.”
~ Les Waas, Procrastinators’ Club of America Founder

It certainly may be hard for some of us to do as we are taught to be punctual at all times.  We are also trained to obey rules and follow regulations and schedules.  In today’s busy lifestyles, the pressure to be here and be there causes us to watch the clock.

The observance urges us to ditch the clock for the day. Not only that but to forgive those who don’t live by the clock. Consider those you know who are perpetually late. Do they seem stressed by their lateness? Or do they tend to shrug it off to your further annoyance? Attempt their light-hearted approach to time.

Another focus of the day takes a look at missed opportunities. Is it really too late to put that birthday card in the mail? We often look at chores with a skeptical eye. However, it’s never really too late to get started on them. You know, those we’ve already put off. It might be okay to be delayed if we’re working on a pile of laundry.

How often have you been on the way to an appointment and a beautiful scene unfolded before you? This observance encourages you to stop and observe the sunrise, a set of deer frolicking in a field or a sea of grain swaying in the wind. When these opportunities present themselves, we should take the time to enjoy them. Procrastination demands it.

For just a moment, stop and smell the roses. Slow down for a little bit. Whether you enjoy the scenery or take a few minutes longer for lunch, the procrastination will be worth it. Visit with a friend, play with your children. Be late for something because of it!!  It will be ok. Be sure to tell others on social media all about being late for something, too. Use #NationalBeLateForSomethingDay as you spread the word.

NATIONAL BE LATE FOR SOMETHING DAY HISTORY

Procrastinators’ Club of America was founded in 1956 by Les Waas. Shortly after the club’s beginning, the committee designated September 5th as Be Late for Something Day.

Q. What does it mean to be fashionably late?
A. A person who arrives 10-15 minutes after the appointed time of an event is fashionably late. The term suggests the person is busy enough and important enough that their late arrival is acceptable. Arriving fashionably later also puts the spotlight on the late arrival since most guests will have arrived at the scheduled time.

Q. When is arriving late acceptable?
A. Arriving late is more acceptable when the time of the event is casual. For example is the invite said “around 6 o’clock,” arriving at 6:15 is acceptable. However, arriving late to meetings, performances, doctor appointments, or even work is frowned upon.

Q. What’s the best way to be punctual?
A. Some people have a knack for being punctual. They tend to dislike being late for events. Punctual people do several things to avoid being late, such as: