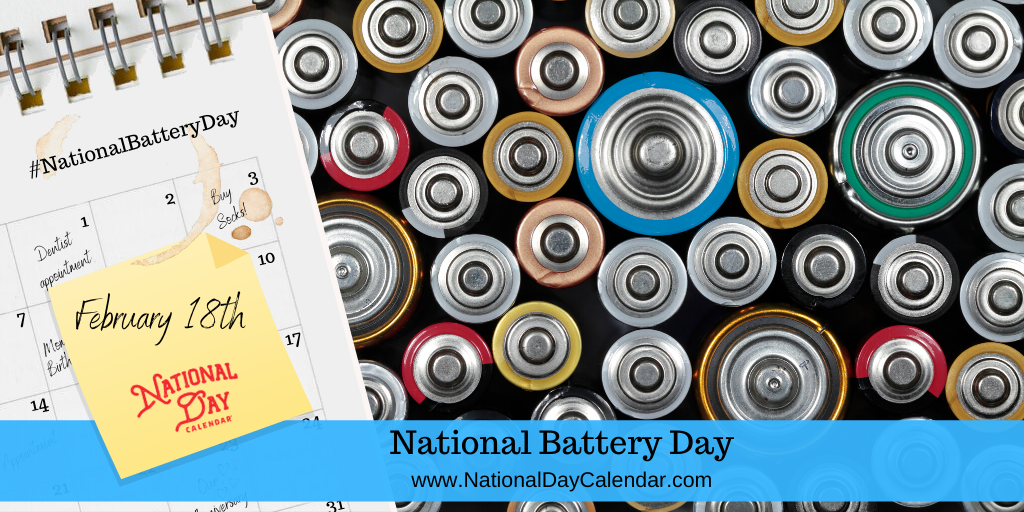 Get a charge out of National Battery Day! Observed each year on February 18th, the day serves to appreciate the convenience batteries provide to our everyday lives.

Today we would be hard-pressed to find someone in the United States who doesn’t benefit from a battery. Even those who live “off the grid” have battery-operated devices such as a flashlight, radio, or watch.

A battery changes chemical energy into electricity by bringing the different chemicals together in a specific order. When correctly ordered, the electrons will travel from one substance to another, creating an electrical current.

Long Road of the Battery

While battery manufacturing for everyday personal use developed in the last 50-60 years, archaeologists found evidence of a device that may have been used to electroplate gold onto silver, much like a battery would. In 1936, during the construction of a new railway near Baghdad, a Parthian tomb was found. Archaeologist Wilhelm Konig found a copper cylinder encasing an iron rod in a clay jar. Konig suggested the find was approximately 2,000 years old.

Benjamin Franklin first coined the term “battery” in 1748 to describe an array of charged glass plates.

In 1800, Italian scientist Alessandro Volta layered silver, cloth, or paper soaked in salt or acid and zinc into what he called “voltaic piles.” The voltaic piles generated a limited electrical current. Volta proceeded to publish his work, and we get the word “volt” from his name to describe the electric potential.

William Cruickshank, an English chemist, designed a battery for mass production in 1802.

Corrosion in batteries has always been an issue, but it was much worse until John Daniell came along. Daniel, a chemist, receives credit for developing a way to reduce corrosion when storing batteries. In 1820 he invented the Daniell Cell, which incorporated mercury, reducing the corrosion.

Until 1957, watches needed to be wound routinely to keep time. Then in 1957, the Hamilton Watch Company introduced the first battery-operated watch.

Today batteries are available for numerous purposes.  In our modern age, portable electricity isn’t something we think about every day because it is easily accessible.  We charge the batteries on our phones by using the batteries in our cars as we travel down the road.  We even have portable chargers that can charge our batteries where ever we are. The variety of batteries change every day. Solar batteries recharge daily and store power in cells. They come in numerous sizes, too.

February 18th Celebrated (and Not So Celebrated) History

Auguste Bartholdi received U.S. design patent no. D11,023 for “Liberty Enlightening the World” a statue that is known today as the Statue of Liberty.

While reviewing photographs he took in January while working at Lowell Observatory in Flagstaff, Arizona, Astronomer Clyde Tombaugh discovers the planet, Pluto. The tiny planet moves from frame to frame, alerting the astronomer that the speck of light is not an ordinary star.

Shani Davis takes gold in the 1000 meter individual event at the Turin, Italy Winter Olympics. He becomes the first African-American to win an individual gold medal at the winter games.

February 18th Celebrated (and Not So Celebrated) Birthdays

The American novelist received the 1993 Nobel Prize for Literature. She is best known for her novel Beloved. Beyond her works of fiction, Morrison also published children’s stories, short fiction, poetry, plays and several works of non-fiction.

In 1965, the American author became editor-in-chief of the literary magazine Cosmopolitan. She remained in the role for 32 years.

The American filmmaker was best-known for his timeless coming of age and comedy movies. Some of his most memorable films include The Breakfast Club, Sixteen Candles, Ferris Buellers’ Day Off, Weird Science, Home Alone, Uncle Buck, and the National Lampoon series of movies.

From Welcome Back, Kotter to Grease and Carrie in the 1970s to American Crime Story, Pulp Fiction, and Gotti, the American actor’s career has transcended genres and nearly 50 years. His versatility allowed him to play roles such as Tony Manero in Saturday Night Fever as well as lighter comedic roles such as in Wild Hogs and Look Who’s Talking.

The rapper known as Dr. Dre launched Aftermath Entertainment in 1996 and Beats Electronics in 2006. In the 1990s, he co-founded Death Row Records with Suge Knight and Dick Griffey.

The American actress rose to popularity in the 1980s with films like Pretty in Pink, Sixteen Candles, and the teen classic The Breakfast Club.