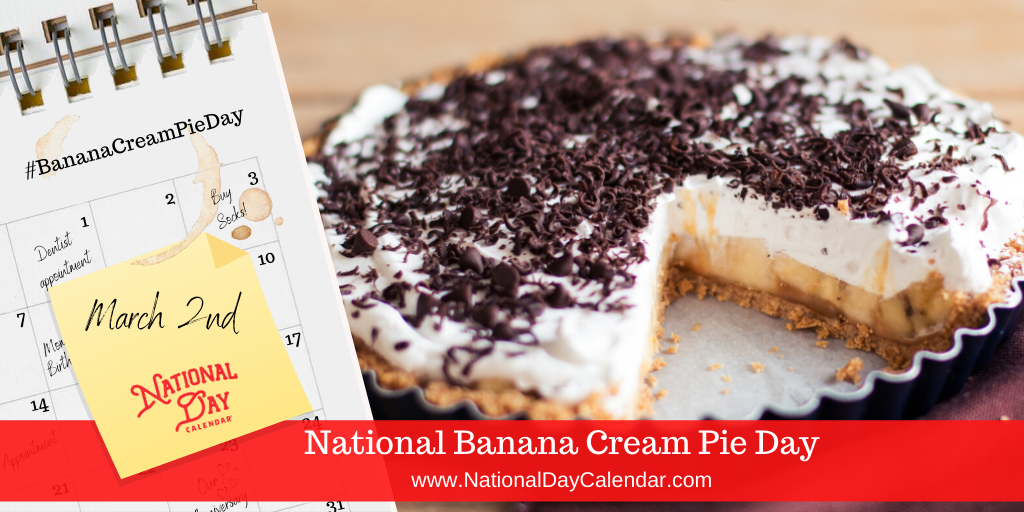 The calendar loves pie days and National Banana Cream Pie Day is no exception! On March 2nd, be sure to get your slice of one of America’s all-time favorite creampies.

Remember, bananas are loaded with potassium!

The traditional custard pie was modified into a recipe that resulted in the appetizing and flavorful banana cream pie. Dating back to the 19th century, banana cream pie found its way into recipe books. Today, recipes fill cookbooks and flood the internet for this yummy pie. In the 1950s, soldiers of the United States Armed Services ranked the banana cream pie as one of their favorites.

Banana and cream complement so many other flavors that bakers enjoy experimenting in the kitchen. Both chocolate and peanut butter pair well with bananas. Many other ingredients do as well. It should come as no surprise when exploring recipes when you discover the sheer number and variety to choose from. It’s a testament to just how much the banana cream pie is enjoyed and loved.

Spend a little time in your kitchen whipping up a delicious banana cream pie to share with your family and friends.

A banana cream pie can be made as simple as:

National Day Calendar continues to research the origins of this sweet holiday.

March 2nd Celebrated (and Not So Celebrated) History

ABC broadcasts the Academy Awards ceremonies for the first time. Viewers tuned in to see their favorite movie stars receive their Oscars, including host Jack Benny, Jennifer Jones for Best Actress in The Song of Bernadette, and Paul Lukas for Best Actor in Watch on the Rhine.

Sony and Phillips introduced the compact disc to the United States for the first time.

March 2nd Celebrated (and Not So Celebrated) Birthdays

On April 4, 1887, the people of Argonia, Kansas, elected Susanna Salter as their mayor. She was the first woman elected as mayor in the United States and had more than just a little understanding of politics.

The American children’s author wrote and illustrated books under the name Dr. Seuss. Some of his popular books include The Sneeches and Other Stories, The Cat and the Hat, and How the Grinch Stole Christmas.

The Cuban-born American actor is best known for producing the I Love Lucy television show alongside his wife Lucille Ball. The successful series broke several television taboos during its six years and garnered a record viewership, too.

The Russian Soviet politician was instrumental in ending the Cold War. In 1990, he received the Nobel Peace Prize.

The American baritone opera singer has performed around the world. His roles have included Carter Jones in Gunther Schuller’s The Visitation, Ramfis in Giuseppe Verdi’s Aida, and the Dutchman in The Flying Dutchman.

The best-selling American author knows how to add a plot twist to his novels. He’s been doing it since The Water-Method Man, but critics first took notice when he published The World According to Garp.

The talented Grammy-winning artist is known for the song “(They Long to Be) Close to You” and her tragically short life.

Known as Jon Bon Jovi, he formed the band Bon Jovi in 1983. Their hit albums have included Slippery When Wet, New Jersey, and These Days.