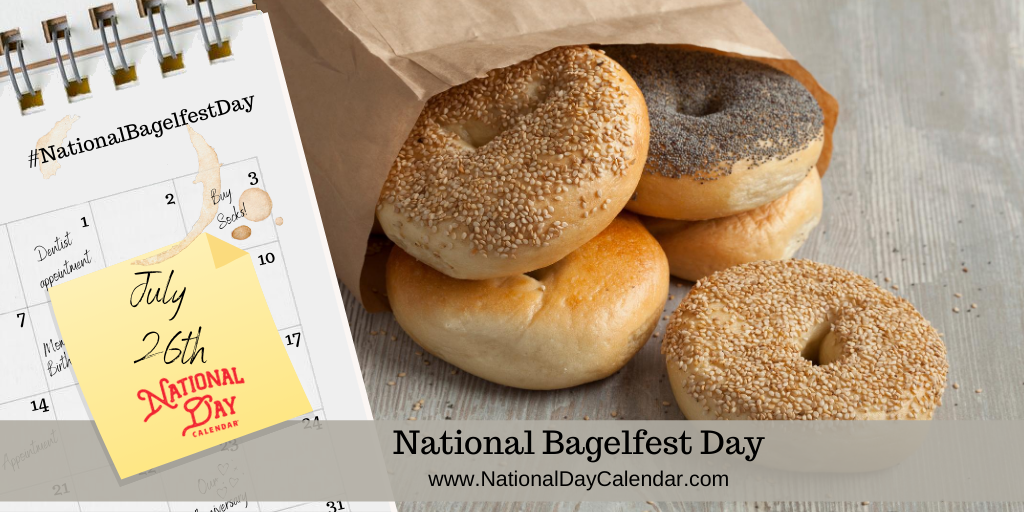 National Bagelfest Day on July 26th recognizes the kosher carbohydrate. Toast one and add a schmear or two. If you don’t, you’re not really celebrating.

North Americans love this crunchy on the outside and chewy in the middle bread. Served with a variety of toppings, bagels also come in a diverse flavors. In most communities, bagel shops are a staple across the country.

Polish-Jewish immigrants introduced the bagel to the United States. Throughout New York City and the surrounding boroughs, they grew thriving businesses. Of course, it didn’t take long for the bakers to organize. In 1907, they created the International Beigel Bakers’ Union. For decades, Bagel Bakers Local 338 held contracts with nearly all bagel bakeries in and around the city for its workers.

Until the 1960s, bakeries made bagels by hand. Then Daniel Thompson invented the bagel maker and along came a heated debate of man versus the machine. Thereafter, the question of the better bagel dangled before customers. Was it the handcrafted bagel or the manufactured bagel?

The bagel became more common throughout North America during the last quarter of the 20th century. Credit for the bagels’ spread across the country goes in part to the efforts of bagel baker Harry Lender, his son, Murray Lender, and Florence Lender. Their pioneering efforts led to the automated production and distribution of frozen bagels in the 1960s. Murray also invented pre-slicing the bagel.

The day allows us to explore the history behind the bagel and savor the varied flavors. Grab some bagels and your favorite toppings. Post on social media using #NationalBagelfestDay.