In 2017, National Day Calendar® began celebrating each state in the order they entered the union, starting the week of Independence Day and ending with Hawaii. We highlight a small part of each states’ history, foods and the people who make up the state. Many states have their own state celebrations. National Day Calendar’s observances in no way replace them. There’s so much more to explore, we can’t help but celebrate our beautiful country even more! 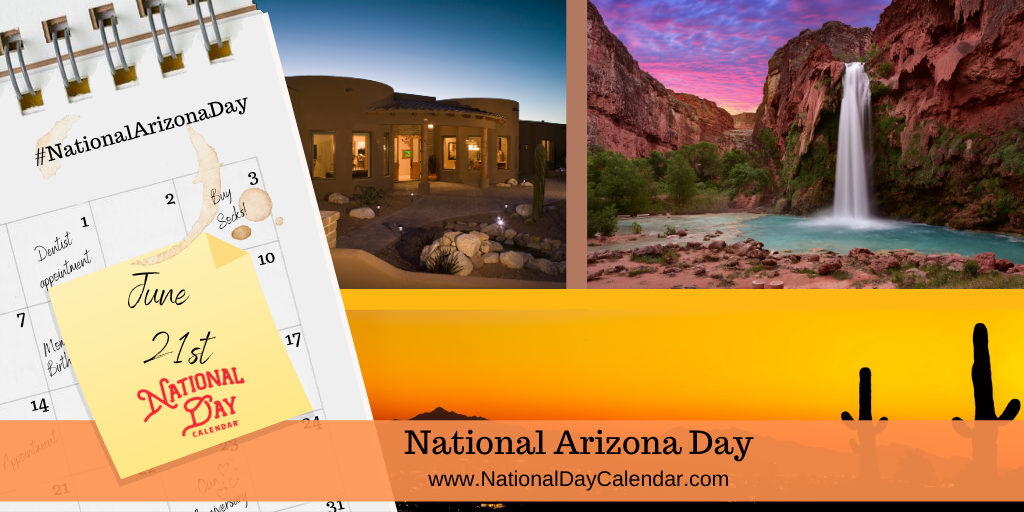 On June 21st, National Arizona Day recognizes the state that joined 48 states into a contiguous unit. Interestingly, Arizona became a state on Valentine’s Day in 1912.

Arizona is home to the oldest continuously inhabited settlement in North America. Established around 1000 A.D., the village of Old Oraibi is located on the Hopi Indian Reservation in Navajo county.

Known as the Grand Canyon State, Arizona brings the wilderness to you. The breathtaking views of the Colorado Plateau, which incidentally took over 70 million years to form into towering stone, are now one of nature’s grand centerpieces.

Carved into limestone cliffs along Beaver Creek, a well-preserved dwelling towers above the scrubland below. Home to the Sinagua Indians around 1500 AD, the Aztecs mistakenly named this place Montezuma Castle.

Like many of the Western states, Arizona Easterners came with the prospect of land, gold, and adventure. Cowtowns were born, and battle lines were drawn between those who wanted the territory and those who were already there.

Find your way to the Saguaro National Park to see the mighty cacti of the west. These majestic plants of the desert can grow up to 50 feet tall. Under the right conditions, they can live to be over 150 years old.

If you’re not buying the line “It’s not the heat, it’s the humidity,” and the soaring daytime summer temperatures of Arizona get to you, Lake Mead may be the cure. With hiking, watersports, camping, and beaches, there are plenty of ways to relax, have fun, and cool off. Plus this Arizona Bucket List Adventure Guide & Journal fits the need for any adventure you desire.

Join National Day Calendar as we explore Arizona’s rich history and remarkable landscapes. Get to know their people, culture, and uncover the hidden places of Arizona! Use #NationalArizonaDay to share on social media.

The legendary Bedonkohe Apache, Geronimo sought revenge against the Mexican and U.S. governments. He successfully evaded capture for decades until 1886. Geronimo surrendered, not once, but twice that year. First to General George Crook, but quickly escaped fearing death. He surrendered once again soon after to Brigadier General Nelson Miles.

During World War I, Frank Luke became known as the second-ranked American fighting ace after Eddie Rickenbacker. He would be shot down after on September 29, 1918, after a string of victories. Luke was awarded the Congressional Medal of Honor posthumously.
Helen Jacobs outward personality and aggressive physical play brought a heated rivalry to women’s tennis in the 1930s. Jacobs often found herself going head-to-head Helen Wills who played with a much more reserved style. Jacobs was inducted into the International Tennis Hall of Fame in 1962.
Wayne Thiebaud’s art depicted the everyday delights that draw shoppers’ vision to windows or colorful, glossy ads. He captured frosted doughnuts and after dinner drinks, patterns and swirls to tantalize the eye.
Country Music Hall of Famer, Marty Robbins, began his career on radio and TV westerns. He would go on to a successful music career and feed his interest in NASCAR, too.

A former migrant farm worker, Cesar Chavez founded the National Farm Workers Association. The organization would later become the United Farm Workers of America and under Chavez’ guidance, it would gain higher wages and benefits for workers.

Joan Ganz Cooney brought education to television through the Children’s Television Workshop (CTW). The first program was Sesame Street with its cast of Muppet and human characters, all of whom reside there. Sometimes guests come to visit Big Bird, Cookie Monster and Oscar the Grouch, too. The next show to land on CTW was The Electric Company.
Television’s favorite genie in a bottle, Barbara Eden starred in I Dream of Jeannie.
Solo artist, Stevie Nicks, is best known for her vocals with the band Fleetwood Mac.
Crowned Miss World America in 1972, Lynda Carter’s most memorable role was the superhero Wonder Woman in the television series by the same name.
In 1991, Diana Gabaldon published the first of the Outlander series. The bestselling series would be later be adapted for television.

Bob Baffert is only the second racehorse trainer to have trained two Triple Crown winners. In 2015, American Pharoah swept the Kentucky Derby, Preakness Stakes, and Belmont Stakes. In 2018, Justify completed the same feat under Baffert’s.

Valley of the Moon – Tucson