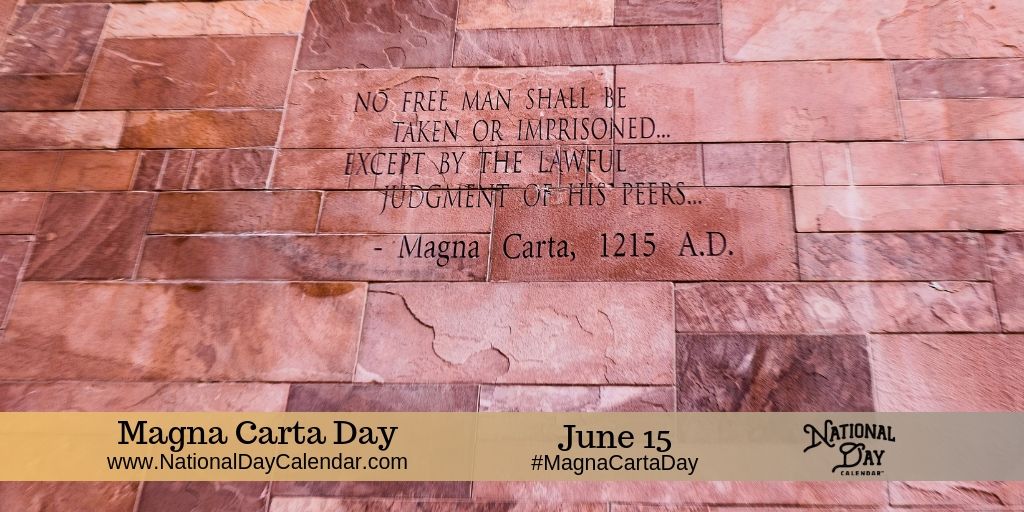 Magna Carta Day on June 15 commemorates the signing of the Great Charter that limited the powers of the English monarch.

While the Magna Carta came about after barons rebelled against King John’s taxes and feudal law, it outlined specific rights and privileges previous documents had avoided. On June 15, 1215, King John signed the document at Runnymede.

Some of the weight of due process written into our laws today comes from the articles written in the Magna Carta over 800 years ago. Trials by a jury of our peers and compensation for goods seized for national needs are all basic principals put forth in 1215.

The design of the Magna Carta influenced the creation of significant documents that govern the modern world. In 1689, the English Bill of Rights was signed, which once again limited the power of the monarchy and 13 articles specifically outlined freedoms. The design and the concepts harken back to the Magna Carta. The United States Constitution, Declaration of Independence, Bill of Rights, and many states’ constitutions all relied upon the Magna Carta for guidance.

Learn more about the Magna Carta by visiting The Magna Carta Project or visit one of the four remaining copies. There are two at the British Library, and one in Lincoln Cathedral. Salisbury Cathedral at Runnymede where King John agreed to the terms of the document retains the fourth copy. The museum there holds a festival annually in honor of the day. Use #MagnaCartaDay to share on social media.

Magana Carta Day has been celebrated for generations.  However, there is no official recognition of the day. In fact, in 1947, there was a formal rejection of the day. You can read more about it at the National Archives of the United Kingdom website.