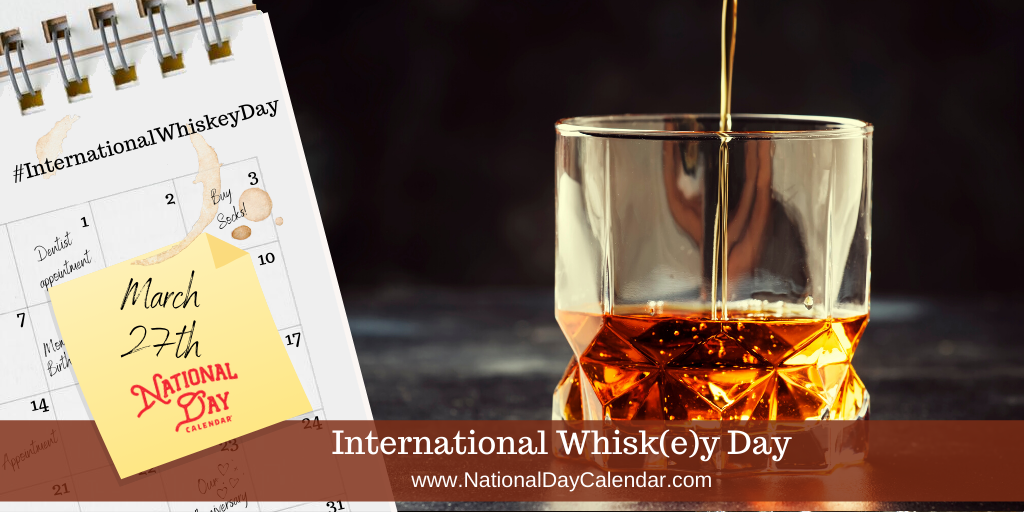 Every year on March 27th, whiskey fans from around the world come together to celebrate their favorite distilled alcoholic beverage. International Whisk(e)y Day uses the parenthesis to indicate support of the Scots, Canadians, and Japanese who spell it without an e. The Irish and Americans include the letter e when writing out the word whiskey.

Whiskey is made from fermented grain mash. Corn, wheat, rye, and barley are the most common grains used to make whiskey. Besides drinking whiskey for pleasure, many people drink it for their health. Whiskey contains a powerful antioxidant called ellagic acid, which helps prevent cancer. Some people mix whisky with warm water and honey to soothe their sore throats. Others claim that drinking whiskey will prolong their life.

Whiskeys are broken down by the following nationalities:

These whiskeys get distilled in their respective country. The Irish are credited for being the first whiskey distillers. The word whiskey comes from the Irish phrase, uisce beatha, or “water of life.” Each kind of whiskey has a specific alcohol content, which is indicated by proof. If a whiskey is 100 proof, it means it contains 50% alcohol by volume.

People around the world are encouraged to drink whiskey on this day. There are a variety of whiskey brands from which to choose. Some of the most popular include:

If you don’t enjoy straight whiskey, you can try a whiskey cocktail. Some favorites include mint julep, whiskey sour, or a Manhattan. You can either make your own concoction at home or go to a bar, where they will most likely have drink specials to celebrate the day. Don’t forget to share your favorite whiskey brand or cocktail on social media with #InternationalWhiskeyDay.

International Whisk(e)y Day was launched in 2009 during the Whiskey Day Festival in the northern Netherlands. The date of March 27th commemorates the birthday of Michael Jackson, a famous British writer. Jackson has written many influential books about whiskey and beer. Whiskey fans around the world organize and run this fun day.