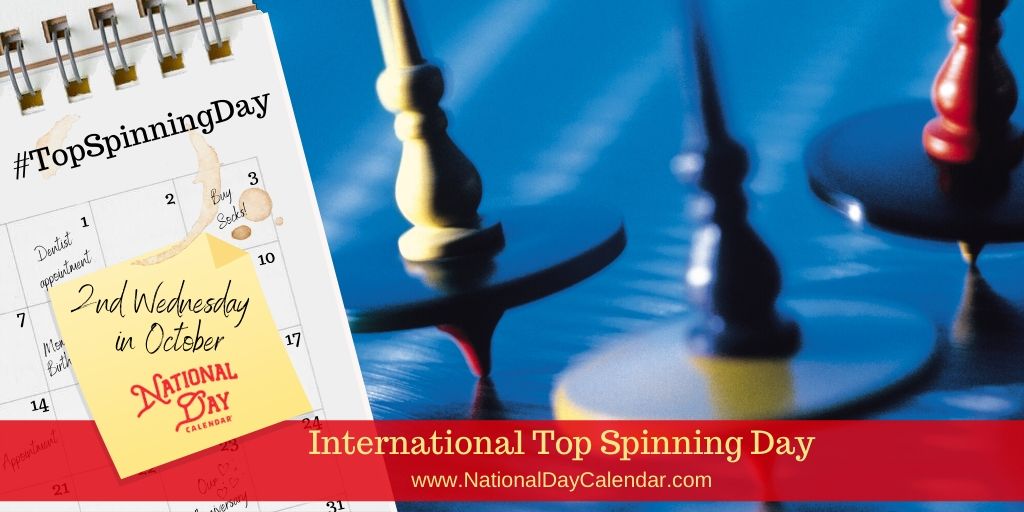 International Top Spinning Day on the 2nd Wednesday of October celebrates the joy and wonder that spinning tops bring into the world.

According to archaeologists, spinning tops are the oldest toys in the world. The oldest spinning top ever found was dated back to the 35th century BC, which was 6,000 years ago. In the 8th century BC, the ancient poet Homer sang about the spinning top. Throughout history, tops were made from a variety of materials. Usually, people carved them from wood. However, indigenous tribes made spinning tops from fruits and nuts. Modern tops are made from metal, glass, or plastic.

Tops may come in different sizes and shapes. However, they all defy gravity in the exact same way. A spinning top gets held upright by angular momentum. Some tops can spin for over 50 minutes! Tops are popular all over the world. Spinning tops across the globe include:

Have you ever spun a top? If not, today is the perfect day to try it out! If you have kids, be sure to introduce them to this wonderful toy.

The goal of International Top Spinning Day is to get at least 10,000 tops spinning around the world. To participate, invite a group of people together to spin tops. Take a photo of your group and e-mail it to the Spinning Top and Yo-Yo Museum.

During past top spinning events, contestants submitted photos from all over the world, including France, Poland, England, and South Africa. Each year, the contest encourages participants to think of fun and unusual places to spin a top. Families, businesses, churches, and schools are all encouraged to take part in International Top Spinning Day.

Whether you are spinning a top solo or with a group, be sure to share your picture or video on social media with #TopSpinningDay

In 2003, the Spinning Top and Yo-Yo Museum in Burlington, Wisconsin created International Top Spinning Day. Judith Schultz, director of the museum, likens a spinning top to the earth spinning around a single axis.