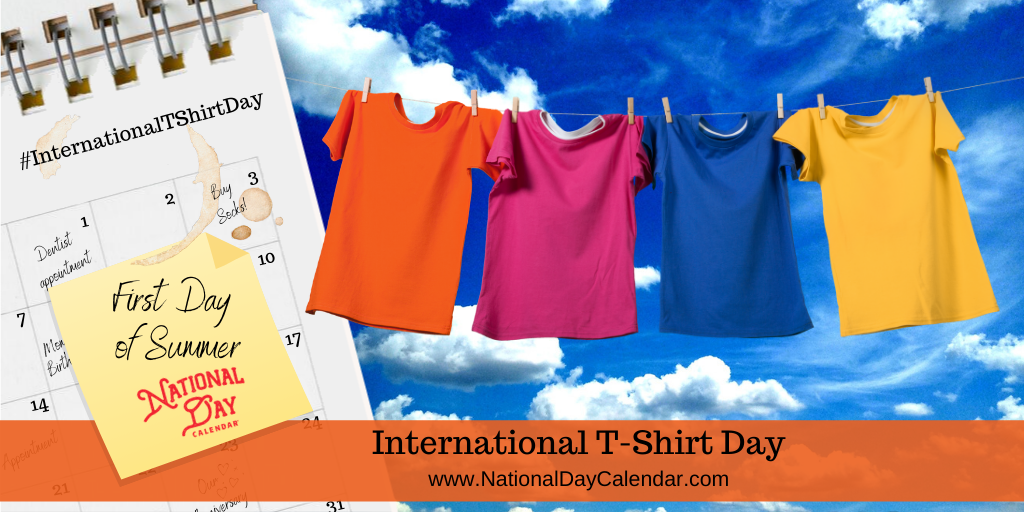 Every year on the first day of summer, International T-Shirt Day celebrates this cool piece of clothing. The day also encourages everyone around the world to wear their favorite t-shirt.

Most people have a few t-shirts in their closets or drawers. Popular all around the world, the t-shirt dates back to 1898. Laborers during this time would cut their jumpsuits in half in order to stay cool during the summer. In 1913, the U.S. Navy began issuing the t-shirt as an undershirt. Seven years later, F. Scott Fitzgerald coined the term t-shirt when he mentioned this piece of apparel in his book, This Side of Paradise.

Until Marlon Brando and James Dean came along, men only wore the t-shirt underneath a regular shirt. These two popular actors popularized wearing the t-shirt by themselves. Even then, many people considered wearing a t-shirt in this fashion as rebellious. Throughout the 1950s, slogans and Walt Disney characters helped to create the graphic t-shirt. In the 1970s, t-shirts with slogans were worn to make a statement. These graphic t-shirts became especially popular for those protesting the Vietnam War.

Today t-shirts are worn for many reasons. Some like them for the sheer comfort. Others enjoy the versatility they offer. Many organizations, fundraisers, and schools create custom t-shirts to show unity or to advertise their cause. T-shirts can also be bought at concerts and sporting events. Some of the best-selling t-shirts include I Heart NY, Vote for Pedro, Superman, Rolling Stones, and Hard Rock Café.

On this day, people all around the world are encouraged to wear their favorite t-shirt. Here are some other ways to participate:

Take a selfie of yourself in your favorite t-shirt and share it on social media with #InternationalTShirtDay.