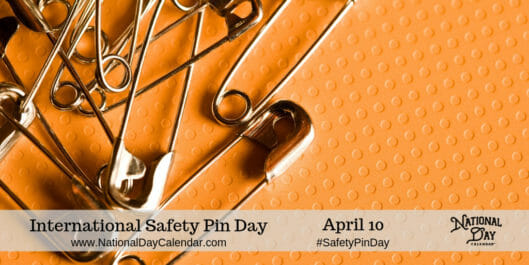 International Safety Pin day is always observed on April 10 to mark the date on which Walter Hunt patented the safety pin.

The patent was not an entirely new invention. Archaeological finds of ancient Greek and Roman sites have found similar items made from bone, ivory, silver, gold, or brass

Walter Hunt’s “dress pin” was designed to spring open and had a clasp covering the point to prevent the injuries that straight pins caused. For this reason, it became known as the safety pin.

Hunt was a prolific inventor. Among his other inventions included many practical designs such as a forerunner of the Winchester repeating rifle, a successful flax spinner, knife sharpener, and a hard-coal-burning stove.  Not unlike other inventors, Hunt received patents for improvements to existing devices as well. For example, he mad various improvements on bullet and casing designs and improved fountain pen. The perpetual tinkerer’s lists of patents goes on – a rope making machine, a machine that made nails, an attachment to boats that allowed them to break through the ice and so many more!

Take inspiration from Walter Hunt this Safety Pin Day and try to come up with your own clever invention.
Read about the inventor Walter Hunt in the book Necessity’s Child: The Story of Walter Hunt, America’s Forgotten Inventor.
Start a collection of unique safety pins. They come in different sizes and colors. The heads of the safety pins are often shaped like animals.
Use #SafetyPinDay to share on social media.

Research unable to find the start of or sponsor of International Safety Pin Day.

International Safety Pin day is April 10, because, on that date in1849, Walter Hunt received a patent for his invention of the safety pin. Legend says he invented it in about three hours after he was pressured to repay a $15.00 debt or about $400 in today’s dollars. He patented it and sold the patent for $154 and paid off his debt.