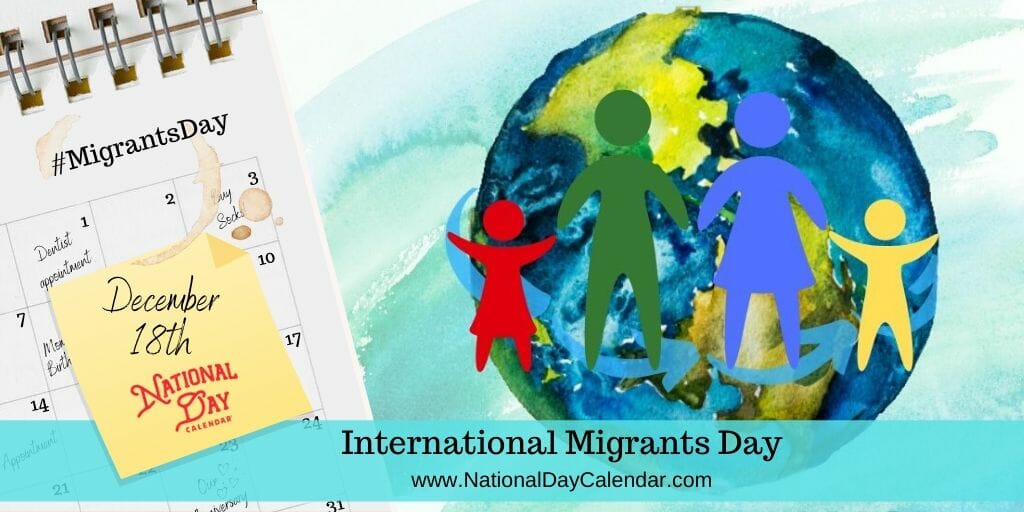 Every year on December 18th, International Migrants Day emphasizes the protection of migrants’ human rights. The day also recognizes the contributions and efforts of migrants around the world.

Ever since human beings were created, they moved from one land to another. In most instances, they traveled to other lands in search of food, water, and shelter. Conflict was another reason people were forced to leave their land and search for a new home.

Migrants Around the World

It wasn’t just the United States that experienced mass numbers of migrants. Some of the largest migrations in the world include:

In most cases, migrants choose to leave the familiarity of their homeland to find a better life in another country. Often, however, they leave hardship behind only to find more difficulty ahead. Some of the most common problems migrants face include language barriers, poverty, securing work, discrimination, lack of adequate housing, and transportation. Migrants also have difficulty accessing economic assistance and healthcare.

Besides these problems that migrants face, there is another problem as well. Many people who want to migrant to another country in hopes of a better future do not have the financial means to do so. For this reason, many developed countries want to make the migration process easier and less expensive. According to the UN, there is mounting evidence that international migration benefits the country of origin as well as the destination.

Many international conferences are held in celebration of this day. In the past, the World Health Organization has released reports that cover information about migrants and refugees.
To participate:

On December 4, 2000, the General Assembly of the United Nations proclaimed December 18th as International Migrants Day. They did so due to the increasing number of migrants in the world. December 18th was chosen because it was on this date in 1990 that the Assembly adopted the International Convention on the Protection of the Rights of All Migrant Workers and Members of their Families.