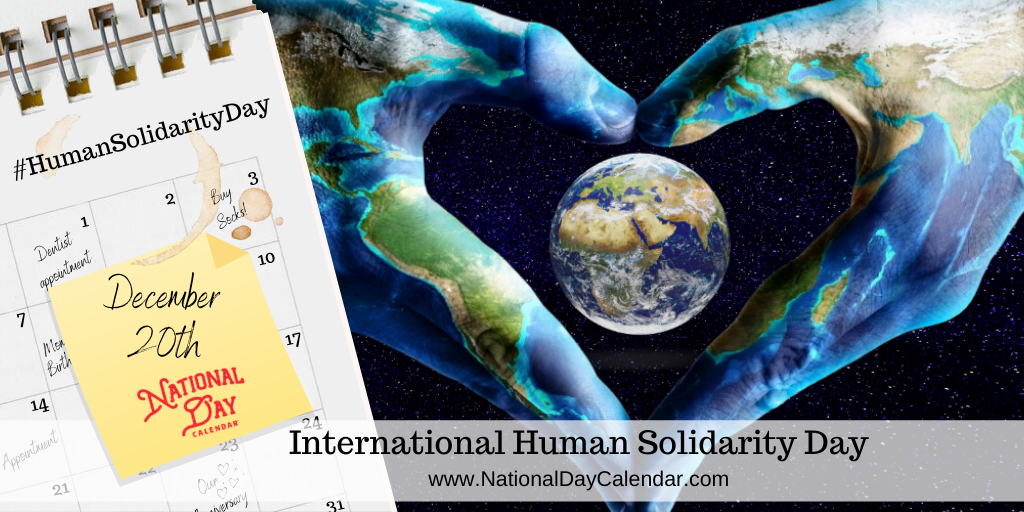 Every year on December 20th, International Human Solidarity Day seeks to celebrate the word’s unity in diversity. It’s also a day to raise awareness about the importance of solidarity.
Solidarity is defined as an awareness of shared interests and objectives that create a psychological sense of unity. Solidarity also refers to the ties in a society that bind people together as one.

According to the United Nations Millennium Declaration, solidarity is among the fundamental values that are essential to international relations. The Declaration also states that global challenges must be managed so that costs and burdens are distributed fairly. This is in accordance with the basic principles of equity and social justice. Additionally, those who suffer the least should help those who suffer the most.

The UN is convinced that solidarity creates a spirit of sharing, which is essential for eradicating poverty.

On this day, the UN encourages new initiatives for poverty eradication. The day serves as a reminder to governments to respect their commitments to international agreements. Events are held all over the world to promote the importance of solidarity. These events include presentations, seminars, conferences, and roundtable discussions. Many of these events also focus on how to combat poverty.

Don’t forget to share this day on social media with #HumanSolidarityDay.

On December 20, 2002, the UN General Assembly established the World Solidarity Fund. The Fund was set up in February 2003 as a trust fund of the United Nations Development Programme. Its objective is to eradicate poverty. It’s also to be used to promote human and social development in developing countries, especially among the poorest segments of their populations.

On December 22, 2005, the UN General Assembly identified solidarity as a universal value. This solidarity should underlie relations between peoples in the twenty-first century. In that regard, the UN proclaimed December 20th of each year International Human Solidarity Day. The date commemorates the establishment of the World Solidarity Fund.