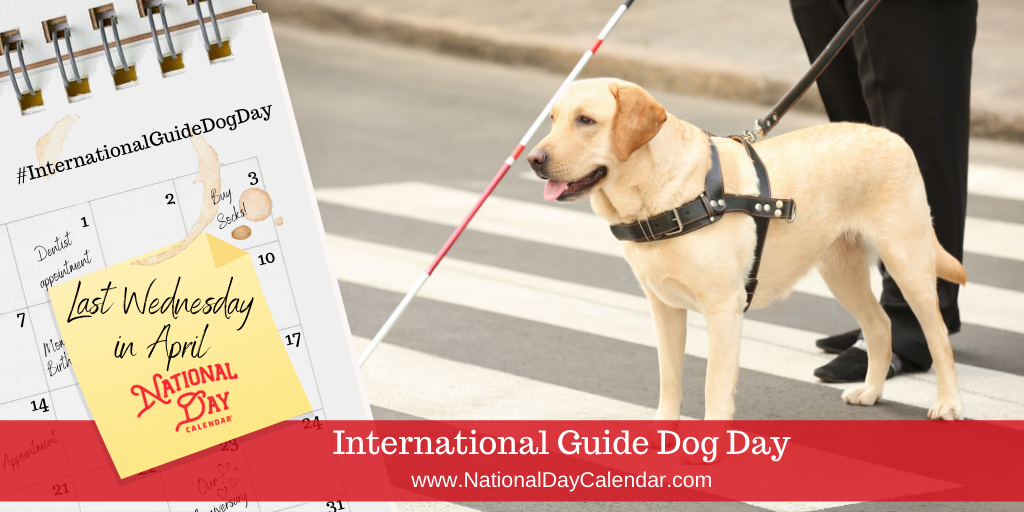 Every year on the last Wednesday in April, International Guide Dog Day honors guide dogs and the amazing work these companions do for those who are blind.

Johann Wilhelm Klein is credited for coming up with the idea for a guide dog. Klein was the founder of the Institute for the Education of the Blind in Vienna. In 1819, Klein wrote about a method for training guide dogs. In 1847, Jakob Birrer, a blind man from Sweden, wrote how he had specially trained his own guide dog.

The concept of guide dogs didn’t become popular until WWI. Soldiers returning home from the war had become blind from poisonous gases. Dr. Gerhard Stalling from Germany came up with the idea of training mass numbers of dogs to help the men. In 1916, Stalling opened the world’s first guide dog school. Eventually, more guide dog schools sprang up throughout Germany.

The schools trained a total of 600 dogs a year. Along with ex-soldiers, the schools provided guide dogs to blind people throughout the world. Due to a reduction in dog quality, the schools were eventually forced to close.

In the 1920s an American dog trainer named Dorothy Harrison Eustis helped to relaunch the guide dog movement. Eustis helped train America’s first guide dog. In 1929, she founded the Seeing Eye School in New Jersey. Today there are guide dog schools in Europe, Japan, Australia, and North America. Thanks to these schools, guide dogs have helped transform thousands of lives.

Guide dog demonstrations, workshops, and special events at guide dog schools are held on this day. Organizations around the world, including The World Blind Union (WBU) also observe the day.

You can also help spread awareness by using #internationalGuideDogDay or #GuideDogDay on social media.

The International Guide Dog Federation (IGDF) was established in 1989. The mission of the organization is to support the efforts of its members. They do this by advancing the provision of guide dogs as a safe way for blind or partially sighted individuals to attain independent mobility. To commemorate the existence of guide dogs, the IGDF designated the last Wednesday in April as International Guide Dog Day.