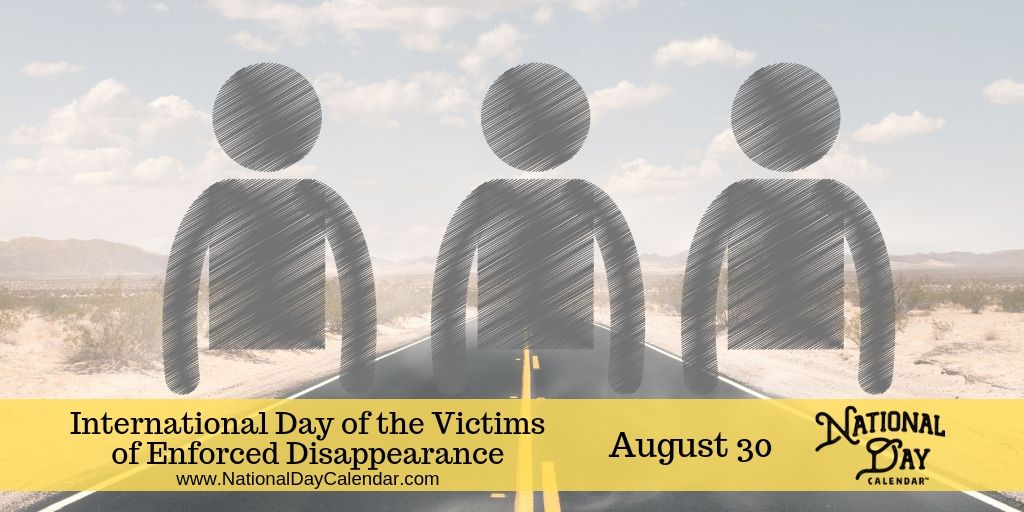 INTERNATIONAL DAY OF THE VICTIMS OF ENFORCED DISAPPEARANCE

On August 30 of each year, the UN observes the International Day of the Victims of Enforced Disappearance. This day aims to increase awareness about the numbers of enforced disappearances around the world.

There is cause for alarm. The sheer number of people who become victims of enforced disappearances dictates it. Involuntary disappearances are often the result of false arrests and abductions. After being arrested, the captors often imprison their victims in places under poor conditions. Some of them are stranded in foreign countries or hospitalized. Specific groups of people are especially vulnerable. These include children and people with disabilities. Other targets include human rights defenders and lawyers. During the investigation of such disappearances, witnesses are often harassed or intimidated. Some of the witnesses disappear as well. The perpetrators of enforced disappearances often use it as a tool to spread terror in the immediate society.

In the country of Kosovo alone, more than 6,000 persons have been missing as a result of enforced disappearances since 1999. Another area of concern is Iran. There, thousands of political dissidents are believed to be either missing or dead as a result of the 1988 prison massacres in that country. Iranian authorities are still concealing their fates and whereabouts. As a result, family members of the missing continue to live out the ongoing nightmare. Other countries where enforced disappearances happen include Syria, Sri Lanka, Argentina, and Zimbabwe. Through the years, the total number of missing people from these four countries has reached over 200,000.

If you would like to observe International Day of the Victims of Enforced Disappearance, you can become a member of Amnesty International. Also, learn about the history of enforced disappearances and why they are so detrimental to families and communities.