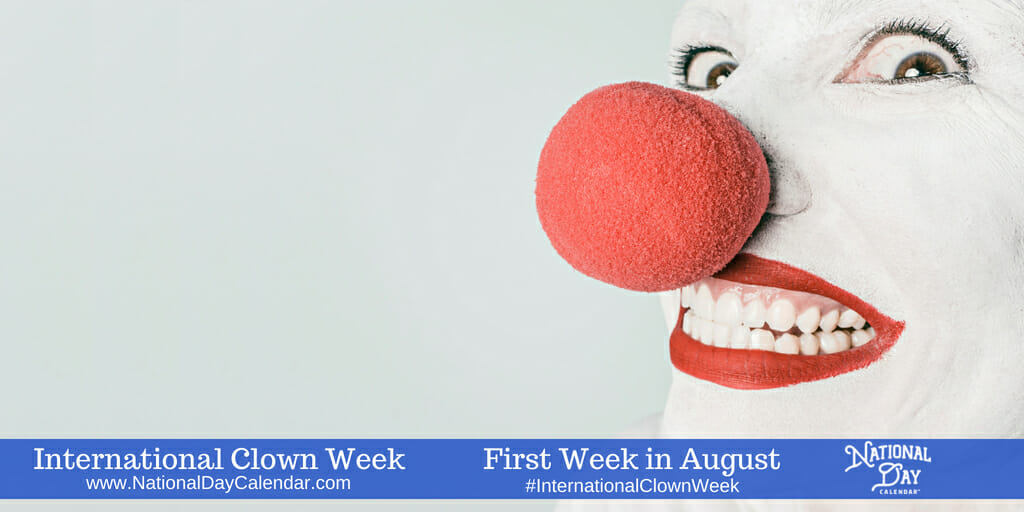 International Clown Week is celebrated each year during the first week in August.

Members of the Clowns of America International group celebrate the entire week hosting special activities and events. Volunteers perform shows and clowns host performances. Some clown members have their local mayor declare the week as a city celebration to coincide with the International Clown Week.

Clown Week began some time in the 1950’s. Walt “Wabo” Savage is believed to be the man behind the original Clown Week. He reportedly picked August because it coincided with the birthdays of both his daughters. In 1966, Ray Bickford, President of Clown Club of America, appointed Frank “Kelly the Clown” Kelly, as the first International Clown Week chairman. Bill “Boom Boom” Bailey, a member of Clowns of America, was the first American chairman of National Clown Week.

Becoming a clown is serious business. Not just anyone can clown around every day. The training is nothing to joke about because clowns take their jobs seriously enough to have a code of ethics known as The Eight Clown Commandments. They also have an official prayer. Clowning around is not allowed during performances. Unless you’re being funny, then clowning around is a requirement.

Clowns come in many forms.  On Weary Willie Day, celebrate the clown who made the sad hobo famous.  They create their own characters and storylines. Like celebrities do, many clowns will develop a following. For example, Bozo the Clown from children’s television with his iconic red hair and Soupy Sales, also known for his children’s television persona. There’s also Willard Scott who first portrayed another redheaded clown with giant shoes – the hamburger-selling Ronald McDonald.

Unfortunately, not all people think clowns are fun. Many people have a fear of clowns known as Coulrophobia. Celebrities such as Daniel Radcliffe and Johnny Depp are among those celebrities who suffer from coulrophobia.

As I stumble through this life,
help me to create more laughter than tears,
dispense more happiness than gloom,
spread more cheer than despair.
Never let me become so indifferent
that I will fail to see the wonder
in the eyes of a child
or the twinkle in the eyes of the aged.
Never let me forget that my total effort
is to cheer people, make them happy
and forget – at least momentarily –
all the unpleasantness in their lives.
And, in my final moment,
may I hear You whisper:
‘When you made My people smile,
you made Me smile.’

Attend a street performance or pursue your dream of clowning.  Are you a clown? Don your costume and put on a show!  Use #InternationalClownWeek to share your talent on social media.

President Nixon proclaimed the first official National Clown Week in 1970. The proclamation begins with “[W]hoever has heard the laughter of a child or seen sudden delight on the face of a lonely old man has understood in those brief moments mysteries deeper than love.” President Nixon believed anything that could bring smiles and joy to people, especially children should get special recognition.

Though the proclamation declared the first week in August of 1970 as National Clown Week, the tradition continued to celebrate the clown and clowning annually.  It grew to an international event and