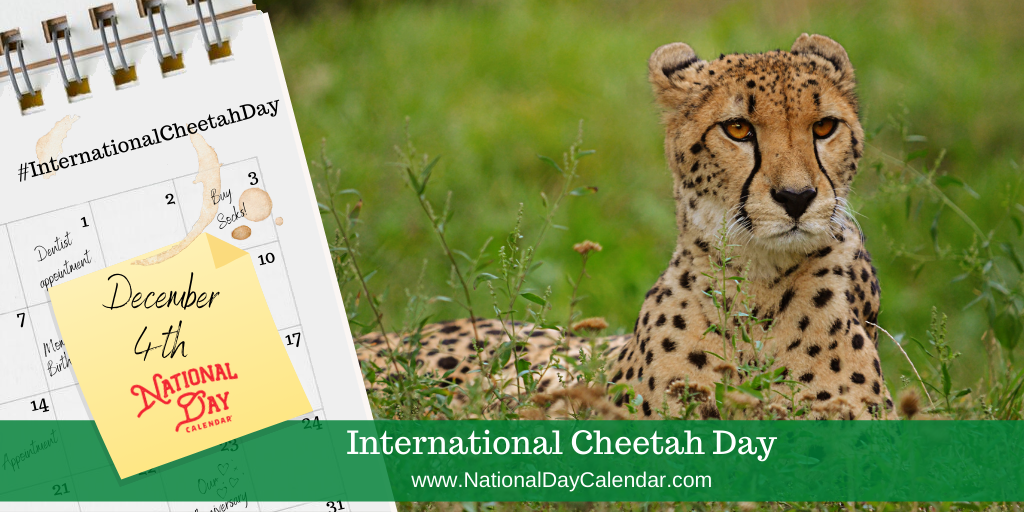 Every year on December 4th, International Cheetah Day encourages people worldwide to help this animal win the race against extinction.

The cheetah is well-known as the fastest animal on earth. This amazing animal can reach a top speed of 70 mph in just three seconds! At top speed, their stride spans 21 feet. The cheetah is a big, slender cat with long legs. Its short fur is yellowish-tan and covered in thousands of black spots. Most cheetahs have between 2,000 and 3,000 spots, which helps to camouflage themselves. The animal’s name comes from the Hindi word, “chita,” which means “spotted one.” These big cats weigh anywhere from 46 to 158 pounds.

Where can I find more International Days?

Cheetahs live on the open grasslands of Sub-Sahara Africa. They are carnivores that feast mainly on small antelopes and wildebeest calves. They sometimes eat smaller animals, such as rabbits and birds. Female cheetahs live by themselves. Male cheetahs, on the other hand, live with a small group of brothers called coalitions.

Cheetahs are the most endangered big cat in Africa. As of 2020, scientists believe less than 8,000 cheetahs are living in the wild. This is a 50 percent decline in the last four decades. In the past, cheetahs were hunted for their fur. Today, one of their biggest threats is the loss of habitat due to increased human settlements and road construction. Some cheetahs are not able to reproduce, which threatens their survival even more.

Many zoos and wildlife conservation groups hold special events on this day that highlight the cheetah. If your local zoo has a cheetah exhibition, this is a great day to check it out. Other ways to participate include:

Post your favorite photo or video of a cheetah on social media with #InternationalCheetahDay or #SaveTheCheetah.

American zoologist Dr. Laurie Marker founded the Cheetah Conservation Fund in 1991. In 2010, she designated December 4th as International Cheetah Day. She chose December 4th as it was the birthday of a cheetah named Khayam. Dr. Marker trained this cheetah for her first research project on teaching captive-born cheetahs to hunt. When she reintroduced Khayam to the wild, she realized how endangered the cheetahs were becoming.