On June 14th, celebrate International Bath Day by filling up a lovely bath for your children. Realize that bath time is a great time to discover and learn. With just a few bath toys or simple plastic cups, they will immediately begin to test the waves of their water lab. Watch and see how every child becomes a little scientist with fresh new bath time discoveries!

HOW TO OBSERVE INTERNATIONAL BATH DAY

Make bath time fun and full of discovery! Like Archimedes, children can learn the basic properties of physics such as empty versus full, floating, sinking, weight, and cause and effect, all while having FUN in the tub!

Legend has it that on this day, Greek mathematician, scientist, and scholar, Archimedes discovered while taking a bath that an object’s volume could be accurately measured by being submerged in water! Unable to contain his excitement, Archimedes leaped out of the bathtub and yelled, “Eureka, Eureka!” as he ran through the streets of Syracuse, Greece. No one knows the exact date of Archimedes’ birth. However, we do know he was born in the year 287BC. To honor Archimedes, we commemorate the date he leapt out of the bathtub, June 14th.

How was this date determined? The ancient Greek legend says that it was precisely one week before the beginning of summer. In those days, the Greeks followed an astronomical calendar, and they determined the seasons based on the 23.5-degree tilt of the Earth’s rotational axis in relation to its orbit around the sun. Summer began (then and today) on June 21st. The week before is June 14th, and this was the date set.

In 2016, the Registrar at National Day Calendar proclaimed the day to be observed on June 14th, annually.

The Second Continental Congress creates a Continental Army of existing militias (some that still exist today) to protect the Northern colonies from British troops.

Congress adopts the first United States Flag. Since its creation, the Stars and Stripes has been officially modified 26 times. The last design became official on August 21, 1959, with the admittance of Hawaii to the union.

The Indianapolis Journal publishes James Whitcomb Riley’s poem titled “‘Long About Knee-Deep in June” for the first time. We’ve included an excerpt to celebrate the mid-point of June.

Captain John Alcock and Lieutenant Arthur Whitten Brown began the first non-stop transatlantic flight. They departed from St. Johns, Newfoundland, and crossed 1,890 miles in 16 hours, 27 minutes, and they arrived in Clifden, Ireland the next day.

On Flag Day in 1954, Congress added the words “under God” to the Pledge of Allegiance in response to the anti-Communist opinion sweeping the country during the Cold War. 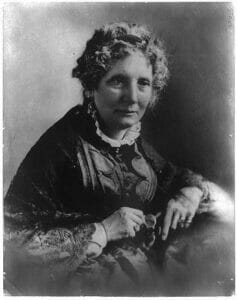 A prolific author and advocate, Harriet Beecher Stowe is best known for her novel Uncle Tom’s Cabin. Unique for her time, Stowe vocally debated topics of the day and provided financially for her family through teaching, her written works and speaking engagements.

In 1920, the British biochemist became the first woman admitted to the London Chemical Society.

The American chemist designed the Pringles can as a uniform way to stack the chips. Upon his death in 2008, his family buried his ashes in a Pringles can, per the inventor’s wishes.

The American businessmen served as the 45th President of the United States from 2017-2021.