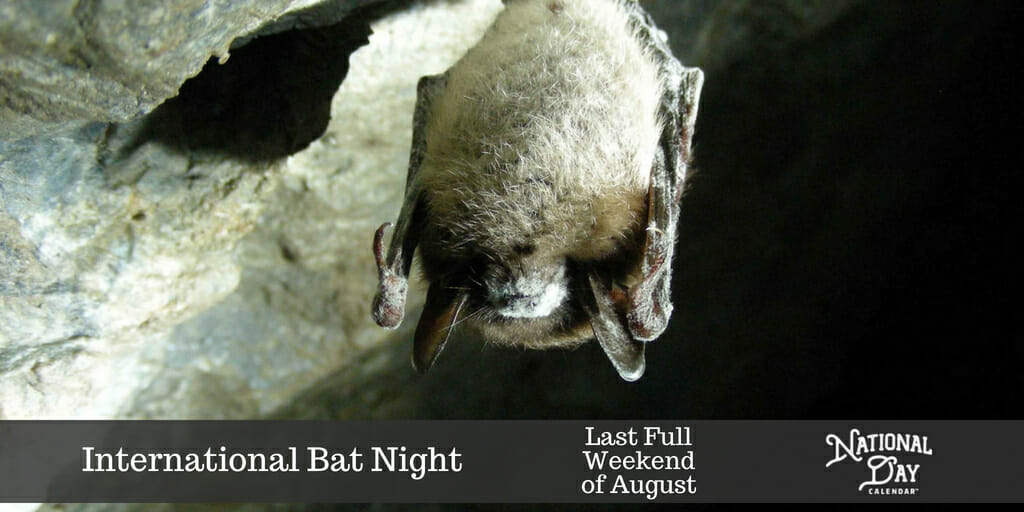 International Bat Night encourages us to learn more about this mostly nocturnal creature. It takes place each year during last full weekend of August. Bat Night started in 1997 and thirty countries celebrate the event to inform the public about the needs and benefits of bats in nature.

Despite what movies and novels might say, bats play an important part in keeping balance in nature. They consume insects that spread disease and damage crops. In the United States, little brown bats common in Kansas, use their echolocation to eat over 1,000 mosquitoes in a single hour. Bats help distribute plants by passing seeds through their feces. The spread of Guano seeds through bats is the main factor for tropical rainforest reforestation.

Long associated with all things dark and creepy, bats are in fact a friend of man. International Bat Night sets out to dispel the myths and point out that bats are mostly harmless to people. Only three of the thousand-plus species are actually bloodsuckers. Vampire bats are found in the tropics of Mexico, Central and South America, generally consume the blood of sleeping cattle or horses. With sharp teeth, a quick nip usually goes unnoticed by the sleeping animals. Yet even vampire bats have proved to be a benefit. Doctors have studied the anticoagulant qualities of their bites and have used that knowledge in developing medication for heart disease and stroke patients. The greatest threat to people is in the possibility of transmitting rabies.

With over 1,200 species of bats, there is plenty to celebrate. Check with your local zoo or the biology department at your area college or university to find out if Bat Night is being observed in your community. We hope you will join us in going to “bat” for them!

Use #InternationalBatNight in social media.

Educators and parents, visit the National Day Calendar Classroom for projects designed to help you #CelebrateEveryDay!

In our research, we were unable to determine the origin of International Bat Night.