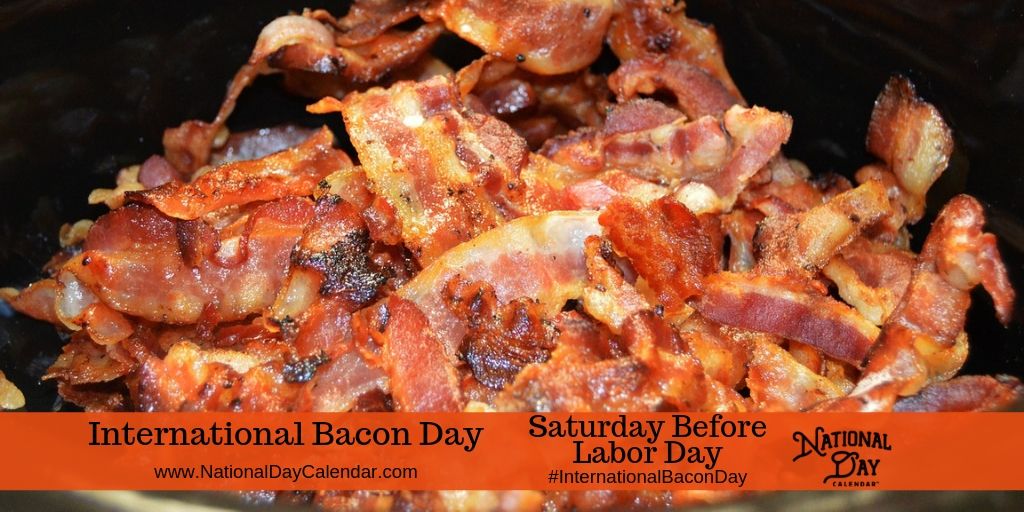 International Bacon Day brings in a flavor fest the Saturday before Labor Day every year. Whether you fry it up, bake it or wrap it, be sure to get in on the deliciousness.

Everybody loves bacon, or so it seems. The average American consumes nearly 18 pounds of bacon each year. It’s not unheard of for bacon sales to reach $4 billion. Americans love the food so much that 65% of them would support bacon as the national food. It’s not just Americans, however, who are eating the delicious delicacy. Although they have different names for it, many people around the world love their bacon, too.

In China, bacon is called “lop yuk,” and in the United Kingdom, they call it “rasher.” In Germany, bacon is called “speck,” and in Italy, it’s referred to as “pancetta.” You might be disappointed to learn that Canadian bacon really isn’t bacon. It’s actually more like ham. Still, it’s a great addition to pizza.

Besides the different words for bacon, this pork product is also consumed in a variety of ways. Fried bacon is very popular with eggs. Some prefer bacon bits on their salad. Some people even microwave their bacon. A large number of people enjoy bacon on their burgers and sandwiches. (Think bacon cheeseburger, BLT, and club sandwich). Others get quite adventurous with their bacon consumption.

And for all of you ice-cream lovers, don’t worry! There are plenty of flavors that include bacon. For those who want a more healthy option, there is turkey bacon or soy bacon.

If you really love bacon, you could compete in, or host, a bacon-eating contest. Go hog wild and eat as much bacon as you want! You probably won’t eat as much as Matt “Megatoad” Stonie, who ate 182 slices of bacon in five minutes. By the way, that’s 11 packs of bacon, which equals 7,600 calories.

However you choose to celebrate this yummy day, be sure to use #InternationalBaconDay when sharing on social media.

Some people say International Bacon day was founded by residents in Bradford, Massachusetts in 2000. Others give credit to some college students at the University of Colorado Boulder who came up with International Bacon Day in 2004. No matter who started it, or how it began, one thing is certain; this special day continues to grow in popularity!