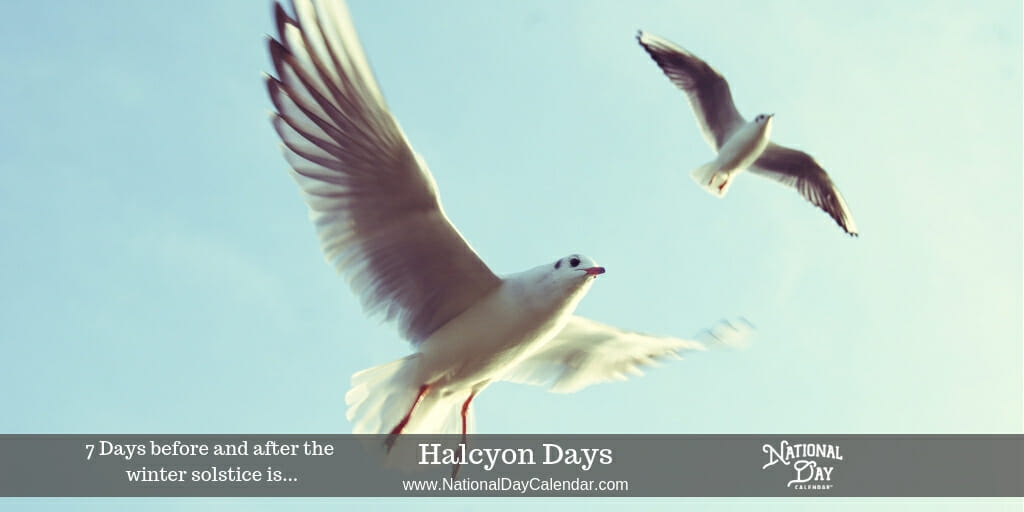 December is a month full of holidays that last quite a while longer than most… We celebrate Christmas Eve and Christmas Day, Hanukkah, Kwanzaa, New Years Eve, and even the “twelve days of Christmas,” but have you ever heard of the Halcyon Days? This celebration is not exactly a holiday, but more of a mythological tradition. Legend says the two week stretch of Halcyon Days is observed in accordance with unusually calm seas. The story comes from Greek mythology.

“In the cliffe of a ponde of occean, Alcion, a see, foule, in wynter maketh her neste and layeth egges in vii days and sittyth on brood… seuen dayes.”

If that 14th century English-speaking snippet doesn’t make much sense to you, this might help.

The Goddess Alcyone (or Halcyone) is the goddess of the winds, and married a mortal king, Ceyx, who drowned at sea in a massive storm. Alcyone loved her husband so much that she threw herself into the ocean after him, and witnessing this, the other gods and goddesses transformed them both into birds. After this, Aeolus, Alcyone’s father, kept the winds calm on the sea for a week before and a week after the solstice (December 21) for the birds to build nests on the water and lay their eggs there peacefully.

Today, the term “Halcyon Days” is used to describe a period of happiness and success. Use #HalcyonDays or #HalcyonWeek to post on social media about what this time might mean to you! Take some time to read the whole story, and learn about Greek mythology as you go. You may become hooked on the stories it tells.

Remember, “halcyon” denotes a time in history that was idyllically happy and peaceful. It means happy, golden, idyllic, carefree, blissful, joyful, and contented. During the busyness of the holiday season, try to have halycon days with family and friends.

The origin of the Halcyon Days lies in Greek mythology.