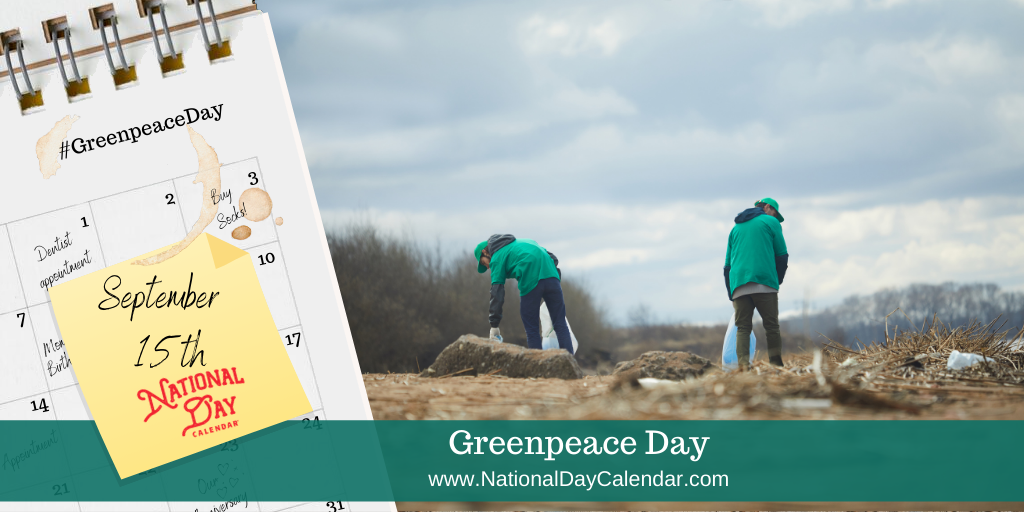 Greenpeace Day is observed on September 15th commemorates the movement that began on this day.

This day highlights activism in the name of the environment. The day recognizes peaceful protest for change to improve air quality, reduce reliance on fossil fuels, use of plastics, water quality. Conservation and preservation fall under their topics of environmental justice.

ac·tiv·ist /’aktivest/ a person who takes part in actions intended to achieve political or social change; may be an individual or member of an organization

Founded in 1971 by 17 activists protesting nuclear testing off the shores of Alaska, Greenpeace now boasts a worldwide membership. Taking on environmental issues and raising awareness, their campaigns continually strive to support and preserve the Earth.

HOW TO OBSERVE #Greenpeace Day

Learn more about activism. Find out about the roots and how its influence has changed the world around you. Give a shout out to an organization who is supporting the environment. Share your experiences, too. You can also volunteer and use your voice. Take action and support vital change.

And while you’re celebrating, use #GreenpeaceDay to post on social media.

When is Earth Day?

Greenpeace was founded on September 15, 1971, when 17 activists set sail on the Phyllis Cormack. They hoped to stop the nuclear testing about to take place off the shores of Alaska. While the testing proceeded, the protest set in motion a movement still growing today. In honor of Greenpeace, Vancouver Mayor, Gregor Robertson proclaimed Greenpeace Day in 2011.

On September 15th in History

After being an itinerant preacher for several years, Antoinette Blackwell is ordained as the minister of the Congregational Church of South Butler in New York. Upon her induction, she became the first woman ordained in a recognized denomination in the United States.

Chemist, Constantin Fahlberg, receives a U.S. patent for a sweetener he accidentally discovered. U.S. Patent No. 326, 281 describes the process for making saccharine. The artificial sweetener would revolutionize the dieting world and at turns create chaos in the food industry.

Sterling P. Fergusson launches the first gas weather balloon in the United States. Made of rubber and measuring 6 feet in diameter, the balloon was filled with hydrogen and ascended from the grounds of St. Louis Louisiana Purchase Exposition. The meteorologist, working for the Blue Hill Observatory out of Milton, MA, included instruments for measuring atmospheric conditions at high altitude. The basket also included information for returning the basket once it descended back to Earth.

While conducting experiments on a strain of influenza, Alexander Fleming discovers penicillin. The revolutionary medication served to control bacterial infections and saved millions of lives.

Tapping into the space-exploring imaginations of a generation, the television show Lost in Space premieres.

Are you hangry? Research at the University of Cambridge shows the fluctuations of serotonin levels in the brain when someone hasn’t eaten or is stress impact areas of the brain that control anger.

The American writer is best known for his frontier stories. In his Leatherstocking Tales, he created memorable characters such as Natty Bumbo and Hawkeye.

Not only was Grant the first African American on the Harvard faculty, but he also invented the first golf tee. While he never marketed the invention, it was patented on December 12, 1899.

Matzeliger’s invention demonstrated how innovation often leads to more jobs, not fewer. In 1883, the shoemaker received patent No. 274,207 for a lasting machine that could produce 700 shoes a day. Before his invention, production was slow, and shoes were mostly handmade. However, after his machine was put to use, more employees were required to keep pace with the increased production.

The physicist and teacher became the first African American to earn a Ph.D. in America. He would advocate for better educational opportunities for his students and was a member of the Franklin Institute and the American Academy of Political and Social Science.

A student of the Tuskegee Institute and Kansas State College, McKay’s poems and novels spoke of social and political divisions. At the time, his work was a major influence in the Harlem Renaissance. Works like his novel Home to Harlem and poets like If “We Must Die” brought a literary response to the movement.

The prolific mystery writer is also the world’s best-selling author of fiction. With estimates soaring to the 2 billion mark, Christie’s works have also inspired television series and movies.

The British civil engineer is known for developing a type of pre-fabricated, portable truss bridge for military maneuvers. During World War II, the British, Canadian and US military used the bridge extensively.

The biographer best-known for her book Thomas Jefferson: An Intimate History was also one of the first female professors of history at UCLA.

The Grammy-winning soprano earned a reputation for her broad range and dramatic performances.

In his more than 30 year career, the award-winning actor has played such memorable roles as Agent K in Men in Black, Samuel Gerard in The Fugitive and Woodrow F. Call in the television mini-series Lonesome Dove.

The Duke of Sussex is the second son of Charles, Prince of Wales and Diana, Princess of Wales.