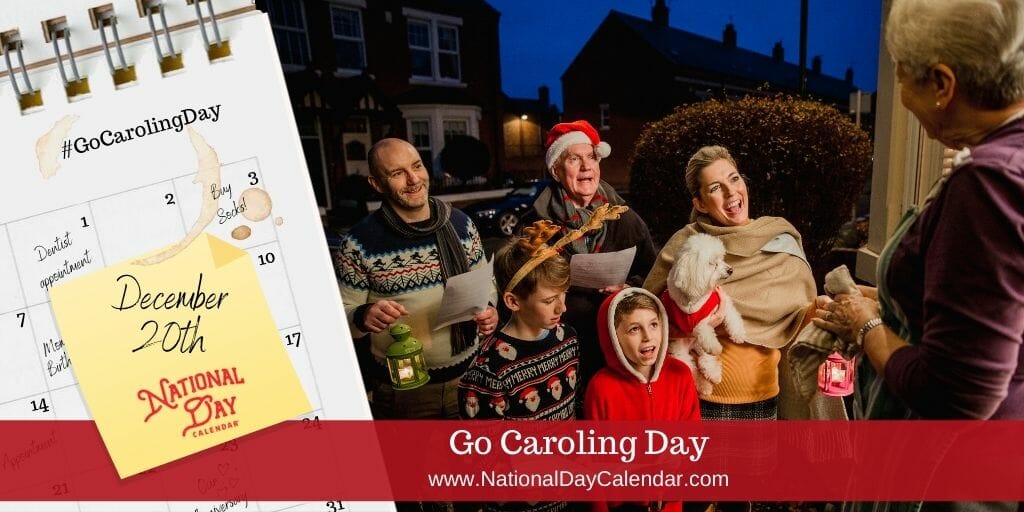 Tune-up your voice on December 20th so you can join others on Go Caroling Day! Caroling is the practice of singing Christmas songs from door to door as a form of celebration. The word carol means a joyful song or dance.

The tradition of singing carols has roots in pagan celebrations of the Winter Solstice. Carols were later adopted by the Christian faith to celebrate the nativity during the 4th and 5th centuries and were primarily sung in Latin. St. Francis of Assisi improved the popularity of singing carols when he paired the songs with stories (canticles), and the songs were performed in modern languages. The Victorian era saw a surge in caroling, and many popular caroling songs still sung today were written during this era.

Though caroling is not as popular as it once was, it’s still a tradition many families, communities, and churches look forward to every year. Some popular caroling songs include:

So, on Go Caroling Day, gather your best voices and sing your favorite Christmas songs door to door in your neighborhood.

Go Caroling Day is an easy celebration that spreads joy and cheer. If you’ve never caroled before, select 3-4 easier songs and friends who are in the holiday spirit. Not everyone can carry a tune, but that won’t matter when you’re surrounded by loved ones who share in your enthusiasm. Visit friends and neighbors and sing the songs with all the joy in your heart. Afterward, return home for hot chocolate and cookies. Caroling is a simple way to give back to others. Share your event using #GoCarolingDay on social media.

Go Caroling Day began to appear in 2001 on December 19th. The day has since moved closer to the winter solstice and is now observed on December 20th.

Q. Do people still carol at Christmastime?
A. Yes. Though the tradition is less popular now than in past times, people still carol from door to door. Sometimes, carolers are hired for special events and holiday parties like those at Olde Towne Carolers.

Q. If carolers stop at my house, do I have to invite them in?
A. No. However, showing your gratitude is appreciated. Whether you offer a smile, applause, or a treat before the carolers move on to the next house is up to you. You can also request a song to show your appreciation.

Q. How should we dress for caroling?
A. First and foremost, dress for the weather. No special costume is required to carol, though you may add festive hats and scarves to your attire.