Valentine’s Day began as St. Valentine’s Day, a liturgical celebration of one or more early Christian saints named Valentinus.  February 14th first became associated with romantic love during the High Middle Ages as the tradition of courtly love was then flourishing. During 18th century England, this day evolved into an occasion in which lovers expressed their love for each other by presenting flowers, offering confectionery and sending Valentine cards.

Mixed opinions prevail regarding who or what was celebrated in mid-February. Some point to martyred saints by the name of Valentine or Valentinus. The most popular story tells of the saint who defied a decree by Emperor Claudius II who outlawed marriage for young men because he believed single men made better soldiers. St. Valentine, preferring young lovers to be wed than have them sneaking around (or believing in the power of love), would marry them in secret. However, it may have been another Valentine who performed the marriages. Either way, at least two of them were beheaded for their actions.

Another possible origin for Valentine’s Day takes us back to a pagan festival called Lupercalia. As a way to discourage participation in the fertility festival, the Christian church placed St. Valentine’s Day in the middle of February.

Since the Renaissance, we’ve been exchanging Valentine’s cards. These handmade missives of romance grew into a more commercial venture by the Victorian era. Today, school children exchange Valentine greetings, too. They prepare for the day by making unique boxes to receive their many hearts, cupids, and pun-filled rhymes.

Chocolates and candy have also become a part of the celebration. While couples tend to be the focus of the day, singles celebrate being single, too. Friends take each other out or reject the overall notion of Valentine’s Day. Dinner and a movie, candlelight, and flowers also fit the bill for couples. It’s one of the busiest days of the year for florists.

HOW TO OBSERVE #ValentinesDay

You can surprise your special someone with flowers, chocolate or a card. Bring a smile to their face with an original poem or homemade meal. If you’re short on ideas, the Dating Divas offer a list of 115 Literal last-minute Valentine’s Day ideas to save your goose!

Get something special for your Valentine and use #ValentinesDay to post on social media.

Credit is traditionally given to Pope Gelasius for declaring February 14th as Saint Valentine’s Day around the year 496 to separate the church from the Roman celebration of Lupercalia, an ancient pagan fertility festival which occurred on February 15th.

Observed each year on February 14th, National Donor Day (also known as  National Organ Donor Day) is a day to increase awareness about organ donation and the lives that can be saved. In the United States, more than 120,000 people are waiting for a life-saving organ donation.

Give the gift of Life.

The observance focuses on five different types of donations:  Organs – Tissues – Marrow – Platelets – Blood.  Many nonprofit health organizations sponsor blood and marrow drives and organ/tissue sign-ups across the nation. Approximately every two seconds, there is someone in the U.S. who needs blood, which translates to the need for over 41,000 daily donations.

Each type of donation saves lives. While blood, platelets, tissue, marrow, and some organs may be donated at any time, most organs are donated upon death. A single donor can save up to 8 lives and help more than 75 people.

Some blood donors have been making donations as young as the age of 17. They can donate a pint of blood every 53 days. One pint of blood can save up to three people. If you’ve never thought about donation, you’re of the 17 percent of non-donors. However, only 37 percent of the population of the United States is eligible to donate blood.

If you’ve received the gift of an organ, tissue, marrow, platelets or blood, share your story.

Look into becoming a donor.  Visit donatelifenw.org and organdonor.gov for more information on organ donation.

National Donor Day was started in 1998 by the Saturn Corporation and its United Auto Workers partners, with the support of the U.S. Department of Health and Human Services and many nonprofit health organizations. 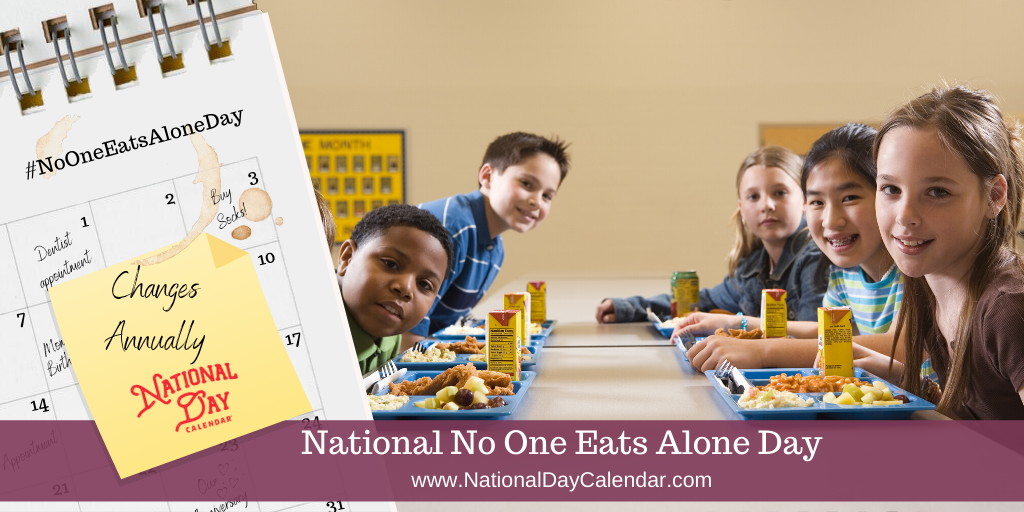 On an early Friday in February, lunchrooms across America have accepted the mission started by National No One Eats Alone Day.

No One Eats Alone is a positive prevention initiative from nonprofit Beyond Differences aimed at creating a lunchtime of inclusion. Organized by students for students, middle schools across the nation look beyond differences and find ways to start conversations at lunchtime – with everyone. No one eats alone.

Join the movement. If your school doesn’t participate, encourage them to start. Create an inclusive lunchroom at your school and encourage each other to engage in positive conversations.

Find out more at No One Eats Alone and use #NoOneEatsAloneDay to share on social media.

NO ONE EATS ALONE DAY HISTORY

February 14th is the annual observance of National Ferris Wheel Day. The holiday honors the birth of the inventor of the Ferris Wheel, George Washington Gale Ferris, Jr.

Preparations for the 1893 World’s Columbian Exposition began in earnest in 1891. Director of works for the fair, Daniel H. Burnham, laid out the challenge: create a centerpiece to the show that will rival the Eiffel Tower in Paris.

Erected the year before, the Eiffel Tower quickly became a world attraction. Ideas were tossed about, plans presented and plans rejected.

George Washington Gale Ferris was inspired. He contemplated several ideas, but it wasn’t until one evening in a Chicago chophouse that he struck on an idea that could fit the challenge.  After sketching out the design on napkins, he proceeded to develop his plans.

When presented with the concept Burnham balked, doubting it could safely carry people to such heights. Ferris persisted. Spending $25,000 of his own money, he paid for safety studies, obtained $600,000 more from investors, hired engineers and built the 250-foot diameter wheel and hoisted it up between 140-foot twin towers.

Despite the wheel’s success, Ferris struggled after the fair. Lawsuits over who owed who bankrupt him. His wife left him. Then in 1896, a few short years after the fair, he died at the age of 37 of typhoid fever.

The original wheel suffered a similar fate. In 1906, it was destroyed with dynamite for scrap metal. The idea has lived on, and wheels continue to be enjoyed around the world.

WHEELS AROUND THE WORLD

If you are near a Ferris Wheel, catch a lift up to the top and enjoy the view. Invite someone to join you and share the experience. As you know, it’s the best way to #CelebrateEveryDay! Share your favorite Ferris Wheel using #NationalFerrisWheelDay to post on social media.

We’ve been around and around about the origins of this day. And while we know it honors the inventor of the Ferris Wheel, we have yet to identify the founder of the day.

Chocolate lovers rejoice as February 14th is National Cream-Filled Chocolates Day!  On the same day, approximately 58 million pounds of chocolate will be purchased. Much of it will be in heart-shaped boxes, filled with bite-sized chocolates with ooey, gooey centers. Quite a few of these cream-filled goodies will be exchanged and shared on Valentine’s Day.

Chocolate makers offer a wide variety of cream-filled goodness, too. Take your pick from marshmallow cream, chocolate, vanilla, strawberry, coconut, hazelnut creme and even creme de menthe. How about coffee cream filled chocolates? Nearly every fruit you can imagine can be made into some sort of creamy center.

What’s inside those hard chocolate shells? Well, many chocolate makers provide a map so you don’t accidentally eat one that doesn’t sit well with you. One way to completely avoid the mystery is to create your own gift box with flavors you select. Some chocolate makers offer this option. Not only do you select the chocolates your love likes best, but it’s a personalized gift, too. How chocolately sweet is that? It’s also a terrific way to avoid biting into a flavor that will ruin the evening.

Another way to make cream-filled chocolates extra special is by making your own.

No matter how you celebrate, be sure you bite into a cream-filled chocolate or two that you like!

Enjoy your favorite cream-filled chocolates. Give a box to someone you care about or make a batch of home-made chocolates. Share your celebration using #NationalCreamFilledChocolates to post on social media.

National Day Calendar continues researching the origins of this mysterious food holiday. We’ve not even found a chart to guide us through the various fillings, so we’re taking our chances and hoping for salted caramel or dark chocolate nougat. And yes, still searching for the founder of this chocolate celebration!

Bring a medium pot of water to boil and add macaroni. Sprinkle with salt to season the pasta.

Remove pasta from the heat when it is al dente and then drain.

In a large skillet, melt butter over medium heat.

Add flour to make a roux.

Stir with a whisk until the flour turns a golden brown, approximately 1-2 minutes.

Add the milk and continue to whisk, removing any lumps.

Cook over medium heat until sauce thickens and begins to bubble.

Add cheeses. Stir until melted and smooth. Remove from heat.

Sprinkle with breadcrumbs and return to bake for 5 more minutes.