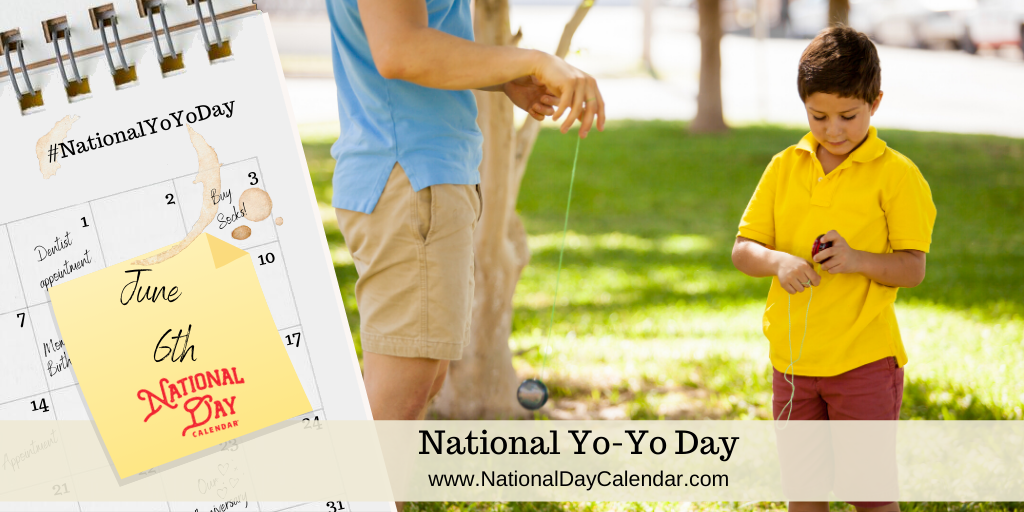 Every year on June 6th, we recognize the fun holiday, National Yo-Yo Day. The day celebrates the iconic stringed toy that generations have enjoyed. June 6th is the perfect day to get out your yo-yo’s and try your hand at The Sleeper, Walk the Dog, Shooting the Moon, Around the World or Hop the Fence.

The yo-yo is an object consisting of an axle connected to two disks and a length of string looped around the axle. It is played by holding the free end of the string, allowing gravity or the force of a throw to spin the yo-yo and unwind the string, then allowing the yo-yo to wind itself back again. The activity is called “yo-yoing.”

It is believed the yo-yo was first invented in ancient Greece. A Greek vase painting from 500 BC displays a boy playing with a yo-yo.

The Yo-Yo in the United States

The yo-yo came to the United States through a young boy by the name of Pedro Flores. When he immigrated to the United States from the Philippines as a young boy, he recalled playing with a toy called a bandalore. The toy inspired Flores to create a business, and he called it the Flores Yo-yo. Between 1928 and 1932 the Yo-yo Manufacturing Company operated in Santa Barbara, California. Flores later sold his companies to Donald F. Duncan.

Donald F. Duncan, Sr. made the yo-yo popular in America when he manufactured the Duncan Yo-Yo in the early 1900s. He first trademarked the name “Yo-Yo” in 1932.

Test your yo-yoing skills by trying as many yo-yo tricks as possible. Do you know how to do the pinwheel or walk the dog? Other ways to celebrate the day include:

Show us your best yo-yo tricks using #NationalYoYoDay by posting on social media.

Founded in 1990 in Arcade, NY by Daniel Volk, National Yo-Yo Day celebrates the yo-yo on June 6th, the date of Donald F. Duncan’s birth in 1892. Volk once worked for Duncan Toy Company as a talented yo-yo demonstrator from 1976-1978, touring the western part of the United States. As a result, Volk had the opportunity to impart some of his yo-yoing wisdom to two talented comedians. The Smothers Brothers later produced The Yo-Yo Man Instructional Video. Mr. Volk demonstrates right along with the comedians in the video, too. In conjunction with National Yo-Yo Day, the Hummingbird Toy Company produced the first of several Smothers Brothers brand yo-yos.