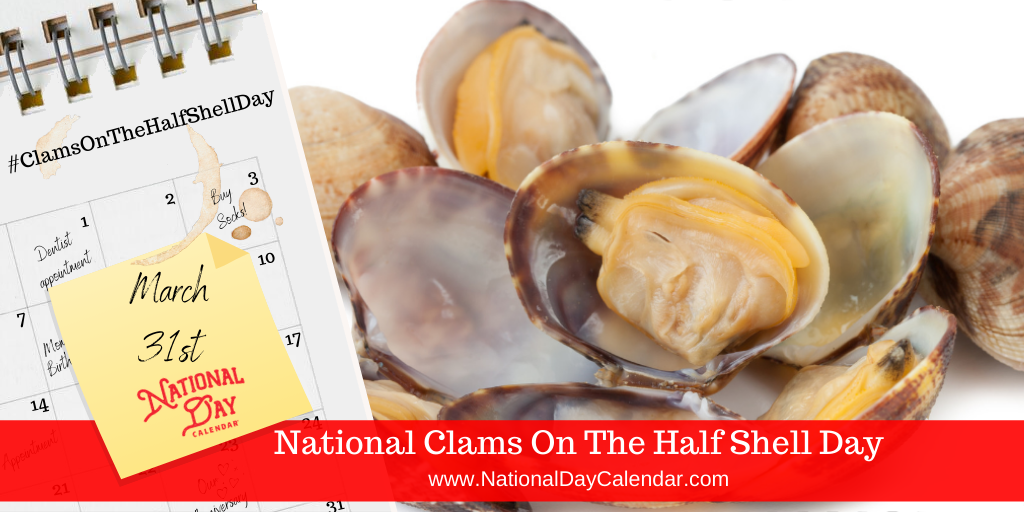 NATIONAL CLAMS ON THE HALF SHELL DAY

National Clams on the Half Shell Day on March 31st offers clam lovers a day to celebrate one of the world’s most unique dishes.

The best variety of hardshell clams (also called Quahogs) for serving on the half-shell is the topneck, but you will find recipes using littlenecks and cherrystone as well. The topnecks run about two inches across, and the meaty clam is enough for a bite-sized morsel of Atlantic saltwater goodness.

Clams on the half shell can be raw, steamed, grilled or even smoked.

One popular “on the half shell” recipe originated in Rhode Island.  Often served as an appetizer, Clams Casino is a dish with toasted breadcrumbs and bacon.  Legend has it the recipe for Clam Casino dates back to 1917 and the Little Casino in Narragansett, Rhode Island.  According to Good Housekeeping Great American Classics, maître d’hôtel Julius Keller and Mrs. Paran Stevens developed clams casino for her guests, as she wanted to serve up something special and named it after the hotel.  The dish soon became so successful, word spread, and it began appearing on menus across the nation.

National Clams on the Half Shell Day is easy to celebrate! Get steaming or grilling, depending on your preferences. Clam lovers dig in and show the rest of the crowd what they’ve been missing! Demonstrate the best way to enjoy them, the flavors and side dishes, too. Order up your favorite clam on the half shell meal. Then, give the restaurant a shout-out.

NATIONAL CLAMS ON THE HALF SHELL DAY HISTORY

National Day Calendar continues to research the origins National Clams on the Half Shell Day. It seems all clammed up about it. Either way, we’ll keep digging for more information and keep you posted.

March 31st Celebrated (and Not So Celebrated) History

Charles Dickens publishes the first issue of the Pickwick Papers.

Electric lights illuminate Wabash, Indiana. Electricians install four of Charles F. Brush’s 3,000 candlepower lamps atop the courthouse. Once lit they cast a brilliant glow across the city. Because of this, Wabash lays claim to being the first in the world to be entirely lit with electric light. However, historians find the use of the word “first” to lack authenticity or accuracy.

Oklahoma! opens on Broadway. The Rogers and Hammerstein production would run for five years and although it won no awards (none existed at the time) the show was a critical and popular success.

The first daylight saving time begins in the United States. This is where the madness started.

March 31st Celebrated (and Not So Celebrated) Birthdays

In 1855, the German chemist introduced the single flame open gas burner commonly used for heating, sterilizing, and combustion in laboratories.

The Mexican poet and author of the essay The Labyrinth of Solitude gained worldwide acclaim for his literature. Throughout his lifetime, his literary prowess has been recognized, most notably with the 1977 National Prize for Arts and Literature in Linguistics and Literature, the 1981 Miguel de Cervantes Prize, the 1982 Neustadt International Prize for Literature, and the 1990 Nobel Prize.

The ambidextrous right wing played a phenomenal 26 seasons in the National Hockey League. In 1973, Howe signed a contract to play for the World Hockey League continuing his professional career another seven years. During his entire career, Howe’s performance logged records that in some cases remain unbroken. He is considered one of the NHL’s 100 Greatest NHL Players and was inducted into the Hockey Hall of Fame in 1972.

A former migrant farmworker, Cesar Chavez founded the National Farm Workers Association. The organization would later become the United Farm Workers of America and under Chavez’s guidance, it would gain higher wages and benefits for workers.

The award-winning trumpeter co-founded A&M records in the 1960s with Jerry Moss. He was also the leader of Herb Alpert & the Tijuana Brass. His foundation established The Herb Alpert Award in the Arts rewarding risk-taking artists in a variety of fields.

Rhea Perlman is the four-time Emmy-winning actress from the sitcom Cheers. Her previous role was playing opposite Danny DeVito in Taxi.

In 1973, the energetic guitarist co-founded the Australian rock band AC/DC.