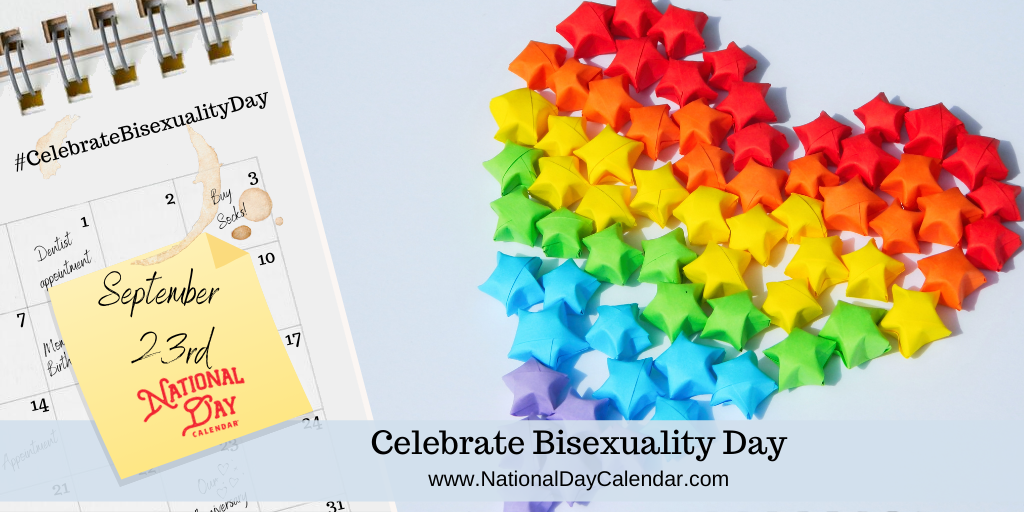 On September 23rd, Celebrate Bisexuality Day unites the bisexual community, their friends, and their supporters. It also raises awareness and provides an opportunity to educate the public about bisexuality.

The day aims to counteract prejudice of bisexuals by both the straight and greater LGBT communities. Across the country, organizations will hold events in communities designed to dispel myths and increase awareness.

There are several opportunities to celebrate this day. The day encourages education and understanding and calls to both supporters and those who are still developing an understanding.

Embrace bisexuality and use #CelebrateBisexualityDay to post on social media.

September 23rd Celebrated (And Not So Celebrated) History

The first organized baseball team is named the New York Knickerbockers. Thirty-six years before, the knickerbocker word became popular for describing New Yorkers and the style of pants worn by boys – short and tucked in at the knee – when author Washington Irving wrote the satirical book A History of New York from the Beginning of the World to the end of the Dutch Dynasty. The Manhattan-based baseball team was the first to use it for a sports team. However, the name would later apply to the New York basketball team now known as the Knicks.

Long before Mario the plumber made his appearance, Fusajiro Yamauchi founded Nintendo Koppai, later named Nintendo Company, Limited. The business originally produced playing cards. However, it also dabbled in other businesses, including a taxi company. Does anyone need an Über or a Lyft?

Patent No. 219,828A is granted to Richard S. Rhodes for his invention of an audiphone. The device improved the hearing of those with conductive hearing loss and is considered the first of its kind. While the device successfully transferred sound vibrations through bone, it was cumbersome to use. However, he later modified the invention, earning him a medal in 1883 at the World’s Columbia Exhibition in Chicago.

The mail officially takes flight. Earle Ovington became the first airmail pilot when he carried the mail in his Bleriot “Queen” monoplane. His route ran between Garden City Estates and the post office in Mineola, New York.

When the Detroit Tigers win 4-1 over the New York Yankees, Sparky Anderson became the first Major League Baseball manager to win 100 games in both the National League and the American League. He started his management career with the Cincinnati Reds.

September 23rd Celebrated (And Not So Celebrated) Birthdays

As a leader of the women’s suffrage movement, Woodhull was a woman of many firsts. From becoming the first woman to own a Wall Street brokerage firm to the first woman to run for president in the United States, she exemplified equal rights.

The German engineer established the engineering firm Robert Bosch GmbH. He is also credited with inventing the spark plug and magneto used in automobiles.

The first president of the National Association of Colored Women was a champion of civil rights and the suffrage movements. She also taught in the first African American public high school.

The Irish cook became known as Typhoid Mary. As a carrier, she was suspected of infecting 53 people with the disease while Mallon remained asymptomatic.

The syndicated columnist began writing his column “Today and Tomorrow” in 1931. He earned to Pulitzer Prizes and wrote several books about politics and government.

The right-handed pitcher in the All American Girls Professional Baseball League earned a reputation for strikeouts. Throughout her six seasons, Dottie brought home the wins and became a fan favorite.

The French inventor created the popular children’s toy, the Etch A Sketch.

The musician lost his eyesight in childhood. However, losing a sense didn’t hinder his ability to compose and perform some award-winning songs. Some of his best songs include “Hit The Road Jack,” “Georgia on my Mind,” and “I Can’t Stop Loving You.” During his career, the multitalented musician earned 17 Grammy’s.

The New Jersey-born singer/songwriter earned a reputation for his rock anthems. He earned 20 Grammy awards during his career including Song of the Year for “Streets of Philadelphia” and record of the year for “Born in the U.S.A.”

The American comedian gained recognition for his work on The Daily Show. In 2018, Netflix began airing his weekly comedy show, Patriot Act.