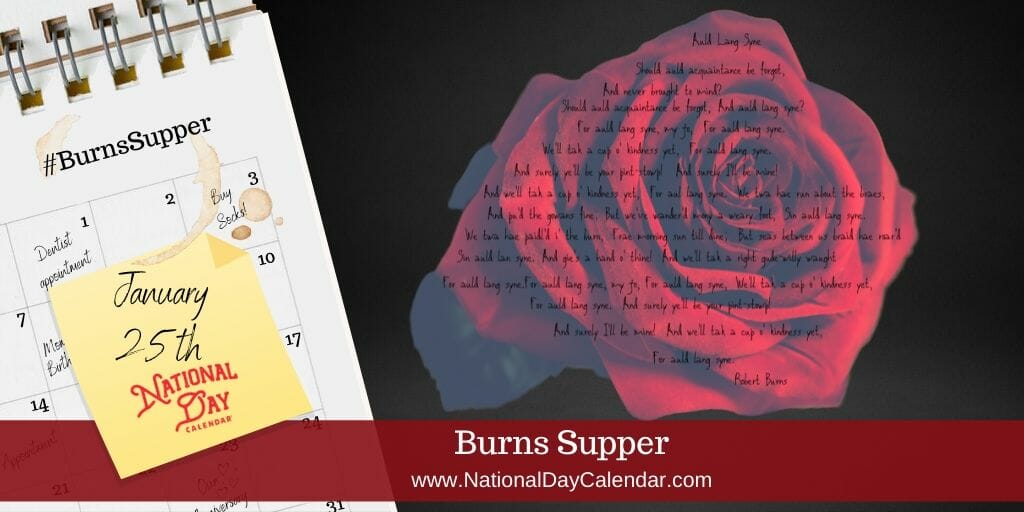 Every year on January 25th, fans of Robert Burns gather together in honor of the famous Scottish poet. The day is popular in the UK, especially among Scottish culture.

Also known as Burns Night and Robert Burns Day, this event is held every year on the birthday of Robert Burns. The Scottish writer of poems and songs was born on January 25th, 1759. He died on July 21, 1796, at the age of 37 years old. Burns had a rheumatic heart condition and is believed to have died from an infection of the heart called endocarditis.

Burns is best known for his poem, “Auld Lang Syne,” which in English means “days gone by” or “times long past.” The poem has turned into a song sung on New Year’s. Other well-known works by Robert Burns include:

Another one of his poems is “Address to a Haggis.” Considered the national dish of Scotland, haggis is a dish that contains a sheep’s heart, liver, and lungs. The dish is minced with oatmeal, suet, and seasoning and encased in the sheep’s stomach. Burns’ poem glorifies the popularity of this authentic Scottish food. Because of this, Burns Suppers traditionally serve haggis as part of the meal.

This annual event usually consists of haggis, Scotch whiskey, and the poetry of Robert Burns. It’s also customary to recite “Address to a Haggis” before eating. A whiskey toast kicks off the feast. Other courses served include soup, cheese, and dessert. Another tradition during the meal includes playing traditional Scottish music, primarily live bagpipes.

Those in attendance also say the Selkirk Grace, which is a prayer of Thanksgiving in the Scottish language. After the meal, an “address to the lassies” and a “reply to the laddies” is given. The attendees end the supper by joining hands and singing “Auld Lang Syne.”

Whether you’re Scottish or not, be sure to share this day on social media with #BurnsSupper.