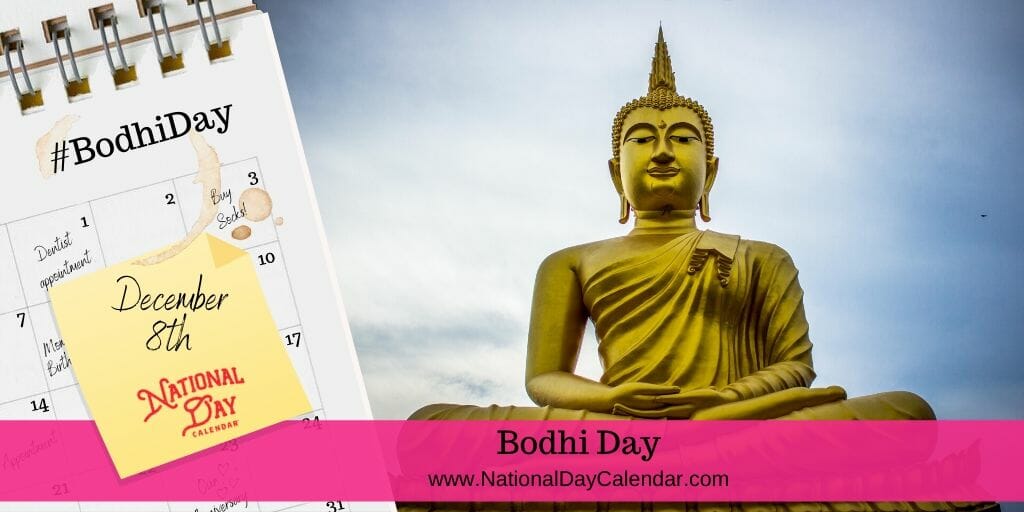 Each year on December 8th, Buddhists celebrate the day that Siddhartha Gautama achieved enlightenment through meditation. The word Bodhi means awakening or enlightenment.

Siddhartha Gautama, the founder of Buddhism, is popularly known as the Buddha. Siddhartha, once an Indian Prince, eventually abandoned his life of luxury for a much simpler one. Many believe that Siddhartha resolved to sit underneath a Bodhi tree and meditate until he found the root of suffering and how to free himself from it.

It took 49 days of unbroken meditation. After becoming enlightened and experiencing Nirvana, Siddhartha became a Buddha, or “Awakened One.” For 2,500 years, Buddha’s enlightenment has served as the central tenant of the Buddhist faith.

The Bodhi tree grows near the banks of the Falgu River in Gaya, India. Also located there is a Buddhist temple. Buddhists consider it their most sacred site of pilgrimage.

While the day celebrates the founder of the Buddhist faith, the day quietly reflects the ways of enlightenment. No parades or fanfare herald the name of the Buddha through city streets. Some eat tea and cookies. Others decorate a Bodhi tree. For most, it’s a day of meditation. Even if you’re not Buddhist, you can still participate in this day.

Remember to share this day on social media with #BodhiDay.

Some Buddhists celebrate Buddha’s birth, enlightenment, and death all on one day. They call the celebration Vesak, and follow the lunar calendar to prepare for the observance. Mahayana Buddhists in China, Korea, and Vietnam break up Vesak into three separate holy days. One of the three days includes Buddha’s enlightenment or Bodhi Day.  Mahayana Buddhists celebrate Bodhi Day on the 8th day of the 12th month of the lunar calendar, which means the dates change from year to year.

In Japan, however, Bodhi Day follows the Gregorian calendar. This is thanks to Emperor Meiji, who began the westernization of Japan when he ruled from 1867 to 1912. Every year, Bodhi Day in Japan is celebrated on December 8th. It’s not known what year it became a day of celebration.