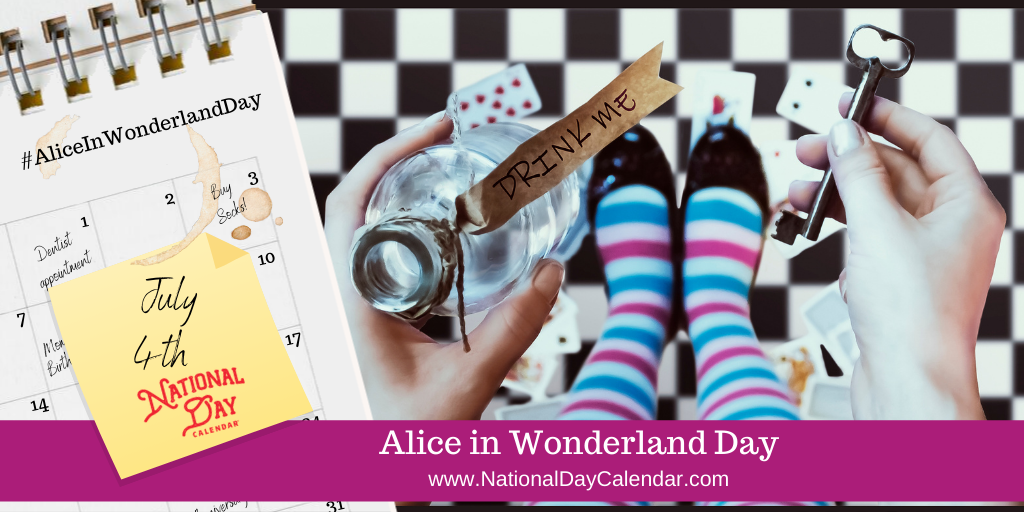 Every year on July 4th, Alice In Wonderland Day commemorates the date that Lewis Carroll first told his beloved story to Alice Liddell. It’s also a day to learn more about this English writer and how this famous children’s book came about.

Charles Lutwidge Dodgson, better known as Lewis Carroll, was born in Cheshire England. He received his education at Oxford University. Though he excelled in mathematics, Dodgson had a creative side. This creativity led him to become an author, illustrator, and poet. Because Dodgson loved how children viewed the world, he often told them made-up stories. One child in particular he enjoyed telling stories to was his friend Henry Liddell’s daughter, Alice.

On July 4th, 1862, Dodgson told Alice and her two sisters a made-up story of a girl named Alice. The girl had fallen down a rabbit hole. During her time in the rabbit hole, Alice met all kinds of peculiar creatures. Dodgson eventually wrote the story on paper and published it in 1865. The story contains a variety of characters such as The Mad Hatter, Queen of Hearts, King of Hearts, Cheshire Cat, White Rabbit, Dodo, and March Hare. Alice’s Adventures in Wonderland is one of the best-selling children’s books of all time. It has never been out of print. The book has also been translated into nearly 200 languages. Sequels include Through the Looking Glass and What Alice Found There.

Throughout the years, the book has been adapted into numerous Alice movies and productions. The first film adaptation came out as a silent film in 1903. The first sound version premiered in 1931. The Disney Cartoon Classic of Alice in Wonderland came out in 1951. A stage version in 1982 called “Alice at the Palace” starred Meryl Streep. Alice in Wonderland has also been adapted as a ballet production, an anime version, an opera, a made-for-television show called, Alice Through the Looking Glass, and a sci-fi miniseries called Alice.

Many Brits and others around the world celebrate this day by dressing up as Alice or other characters in the book. Other events include Mad Hatter tea parties, storytimes, special exhibitions, and visits to Alice’s Shop in Oxford. Another great way to participate is to read the book for yourself or to your child. You can also watch one of the many Alice in Wonderland movies. Share a picture of your favorite Alice in Wonderland character on social media with #AliceInWonderlandDay.

The year 2015 marked the 150th anniversary of the “Alice in Wonderland Book”. During this same year, British fans of the book began holding special events that marked the date the story was first told. Since then, every year on July 4th in Britain has been known as Alice Day or Alice in Wonderland Day. Every year, more people from around the world take part in Alice-themed events.