7 Popular Beard Styles Throughout History – There is a good chance you know a guy with a beard. According to recent statistics, 33 percent of all males in the United States have facial hair. The number is higher when it comes to men around the world. On a global scale, 55 percent of men have facial hair. For many men, this facial hair includes a beard. Beards aren’t just popular today, though. Beards have been worn all throughout history and in all kinds of styles.

The goatee is a tuft of hair on the chin, just like on the chin of a goat. A goatee is worn with or without a mustache. This style dates all the way back to Ancient Greece and Ancient Rome. Throughout history, many famous men have sported a goatee. Some of these men include Uncle Sam, Henry M. Hoyt (the 18th governor of Pennsylvania) and Mr. Spock on Star Trek. This style is a combination of a pointed mustache and a goatee. The Flemish painter, Anthony van Dyck receives credit for creating this beard style. The Van Dyke was popular during the 1600s. Famous people who wore variations of the Van Dyke beard included King Charles I and Guy Fawkes.

When facial hair extends from one side of the face to another along the jawline, it’s called a chinstrap. The style of beard was popular from the 1700s to the 1850s. Famous men who wore a chinstrap beard included Henry David Thoreau, David E. Twiggs, and Hudson Taylor. This style of beard doesn’t really cover the chin. Instead, the facial hair is worn down the sides of the cheeks. The style first became popular in the 1860s and extended to the 1890s. Ambrose Burnside, a general during the Civil War made the beard popular. Because of him, the style was also called the burnside. The beard 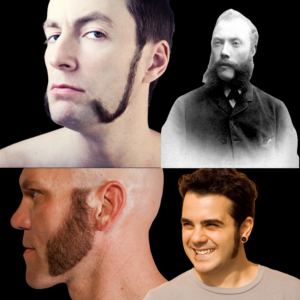 Men took a break from the beard during the 1900s. This is when facial hair usually only consisted of a mustache. It wasn’t until the hippie movement of the 1960s that beards became popular again. This is an era when long hair was popular for both men and women. Some men grew out their beards along with their hair. The full beard is still popular today. Famous men sporting full beards include the Robertson men from Duck Dynasty, actor Jason Momoa, and NFL star Eric Weddle.

Facial hair that’s barely there is sometimes referred to as stubble. This style of beard became popular during the 1980s. Famous men who wore designer stubble include George Michael, Don Johnson, and Tom Cruise.