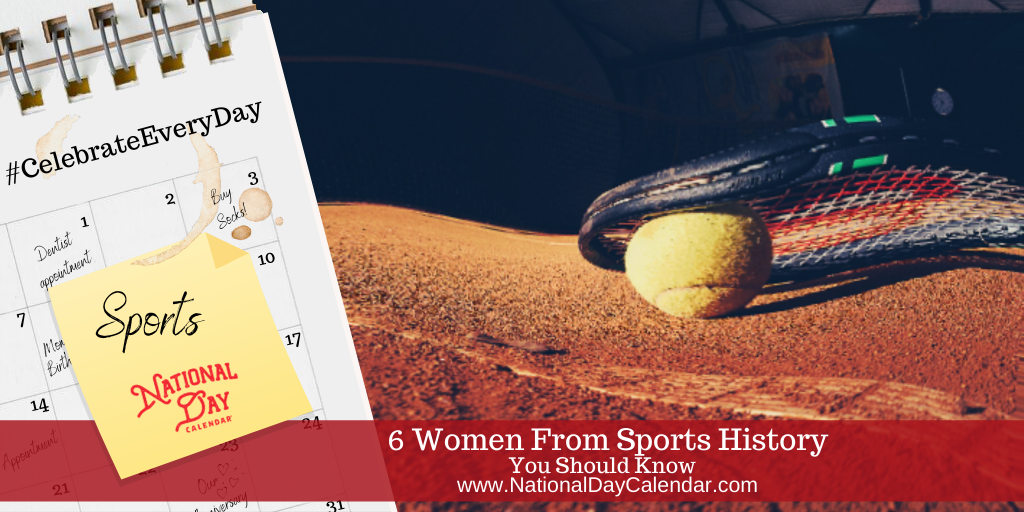 6 WOMEN FROM SPORTS HISTORY YOU SHOULD KNOW

6 Women From Sports History You Should Know – Women in sports know women in sports. We know the Billie Jean Kings and the Florence Griffith Joyners. We praise them and hail them. Women in sports also know Althea Gibson, Danica Patrick, Wilma Rudolph, and Shannon Eastin. But there are a few names in sport that we don’t know and should. These women left indelible marks on the field of play making it possible for the next generation to play a serious role as athletes, coaches, leaders, and more. While there are many more names in the history books, you should know these 6 women from sports history.

Long-distance swimmer Florence Chadwick grew up swimming in rough waters in San Diego, California. Chadwick may not be listed as an Olympic medal holder, but no events existed for endurance swims like her. However, she made plenty of other accomplishments to make this list.

On August 8, 1950, at the age of 32, Chadwick swam across the English Channel in record-breaking time. One of the things Chadwick said after completing the swim was that she was going to cross back over. Just over a year later, Chadwick kept her promise, too. She swam back across in the other direction on September 11, 1951, becoming the first woman to swim across the channel in both directions. She swam the channel again in 1953 and 1955. In between, she traveled home to swim and to the Straits of Gibraltar with varying degrees of success. Along the way, Chadwick broke records set by both men and women, paving the way for more women to dive into the rough waters. Following her retirement, she was inducted into the International Swimming Hall of Fame.

Ora Washington dominated in not one but two professional sports, and she did it in an era of segregation. At the same time, society was questioning a women’s place once more. While some encouraged athletics, others longed for women to remain feminine and lady-like. Washington shrugged off these constraints whenever she could. While she played on segregated teams, she did challenge many of the conventions held to women. She earned 11 straight Women’s Colored Basketball World’s Championships with the Tribune Girls.

Later in her career, she focused on tennis, honing her skill and style. She may have even been the first Black woman to play in shorts. During her tennis career, she won 8 American Tennis Association Titles.

In 2018, Washington was inducted into the National Basketball Hall of Fame. However, the International Tennis Hall of Fame has not yet recognized her accomplishments and contributions to the sport of tennis.

As a child, Alice Greenough was immersed in ranch life. So it shouldn’t be a surprise that she grew into one of the world’s foremost rodeo stars. She spent much of her early career bronc riding. However, that would change. Her career in the rodeo took off during the Great Depression and led her to tour Europe and Australia. She even rode bulls into some arenas. In 1936, Greenough joined other riders to form an organization known today as the Professional Rodeo Cowboys Association. Along with her husband, Joe Orr, she offered the first barrel racing events for women. In 2002, Alice Greenough Orr, Jackie Worthington, and Sissy Thurman were the first honorees inducted into the Cowgirl Hall of Fame.

Effa Manley was not an athlete. However, she had a mind for the business of athletes, and that business is complicated. She was born into a bi-racial family, led a bi-racial life, and listed colored on her marriage license in 1933 to marry her husband, Abraham Manley, legally. Many believed she was light-skinned. Though later in life, she claimed she was white. What we do know is she loved baseball, her community and had a drive for business.

In 1935, she became part-owner of the Negro League team Brooklyn Eagles when Abraham purchased the team for $100,000. It wasn’t long before she took the reigns and grew it into a successful business. Effa was known for her fierce stance on equal rights, often hosting Anti-lynching Days at games. She also served as secretary for the local chapter of the NAACP. The team’s name changed to the Newark Eagles when they moved to New Jersey, and in 1946 they won the Negro League World Series.

That same year, Jackie Robinson had packed his bags, leaving the Negro Leagues and the Kansas City Monarchs on his way to a Brooklyn Dodgers farm team. He was about to break the color barrier. And while Robinson signed a contract, the Monarchs received nothing in exchange for losing Robinson.

It wasn’t long before other teams came looking for more quality players in the Negro League. Effa was ready for them. Not only did she negotiate better contracts for the players, but she also demanded payment for the teams as well, including players Larry Doby and Monte Irvin.

In 1972, Title IX Amendment brought many activities back to high schools and colleges that had once been eliminated. One of those programs included the women’s basketball program at Delta State in Cleveland, Mississippi. In 1925, Margaret Wade was team captain of Delta’s first female basketball team. The sport was eliminated in 1932. Wade would pursue a semi-professional career and later share her skills as a coach at the high school level.

In 1959, Wade returned to her alma mater as the Director of Women’s Physical Education. Delta State re-launched the women’s basketball program in 1973. With Coach Wade at the helm, the team earned three consecutive Association for Intercollegiate Athletics for Women National Championships.

Throughout her career, Dorothy Sears Ainsworth was known for her dedication to women’s and girls’ physical education. Her efforts began in earnest while at Smith College; Sears-Ainsworth was also a skilled athlete in her own right before pursuing higher education. At Smith College, she further advanced physical education as an educator, serving as its Director of Physical Education for more than three decades. She developed intermural and physical education programs based on her educational theory. Sears-Ainsworth made international contributions and helped establish the International Association of Physical Education and Sport for Girls and Women in 1949.