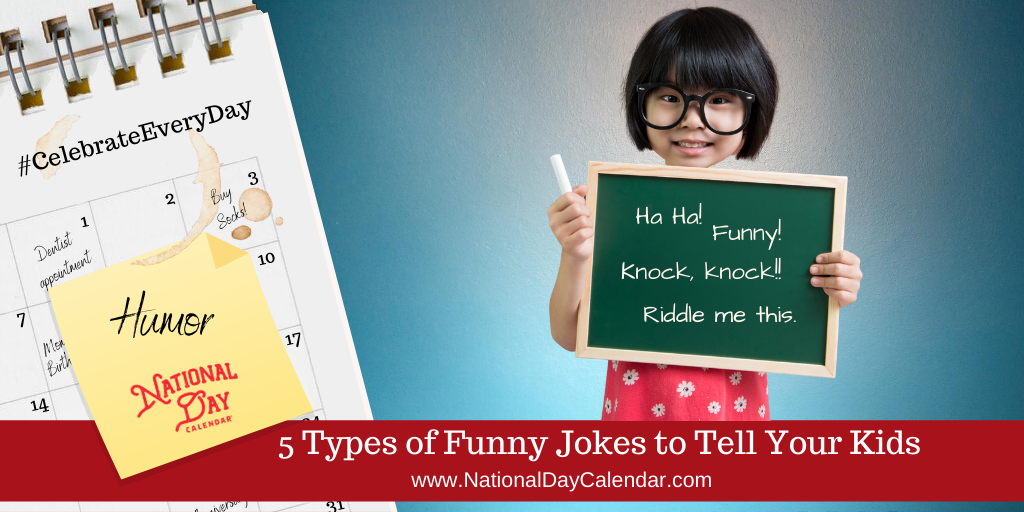 5 TYPES OF FUNNY JOKES TO TELL YOUR KIDS

5 Types of Funny Jokes to Tell Your Kids: There is a good reason for the saying, “laughter is the best medicine.” Laughter really does provide health benefits. Besides releasing endorphins to help you feel good, laughter also temporarily relieves pain and protects the heart. When people laugh together it can also bring a sense of belonging and acceptance. For these reasons, laughter isn’t just good for adults, it’s good for kids too.

One way to make your kids laugh is to tell them a few jokes. Here are five funny kinds of jokes, and examples of each, that will be sure to tickle their funny bone.

One of the most popular types of jokes for kids is the classic knock-knock joke. This type of joke is supposed to be like someone is knocking on the door of a house. When someone answers, they deliver the punchline, which is usually a pun. A few examples of knock-knock jokes include:

Knock Knock.
Who’s there?
Who.
Who who?
I didn’t know you were an owl!

It’s hard to believe that the Chicken Crossing the Road joke dates all the way back to 1847! A version of the joke first appeared in a New York City magazine called The Knickerbocker. The original joke goes like this: Why did the chicken cross the road? To get to the other side! Through the years, there have been several variations. Here are some for your kids:

A riddle is a statement or question that can have a double meaning. It’s often a misleading or puzzling question that a person is supposed solve or guess. Here are some good riddles for kids:

What’s black and white and blue?
A sad zebra!
What has four I’s but can’t see?
Mississippi!
What word is spelled wrong in the dictionary?
Wrong!
What goes up but never comes back down?
Your age!
What has hands but doesn’t clap?
A clock!

These kinds of jokes can be similar to a riddle but they are usually meant to get a laugh. Although some of them are so corny, your kids might just roll their eyes and walk away. Here’s some cute corny jokes that might get your kid to laugh, or at least chuckle.

Why did the strawberry cry?
His parents were in a jam!
What do you call a pig that does karate?
A pork chop!
Why was Cinderella so bad at soccer?
She kept running away from the ball!
How do you keep a bull from charging?
Take away his credit card!
What did the buffalo say when he dropped his son off at school?
Bison!
Why can’t you hear a pterodactyl going to the bathroom?
Because the “P” is silent!

Have your kids try these tongue twisters: