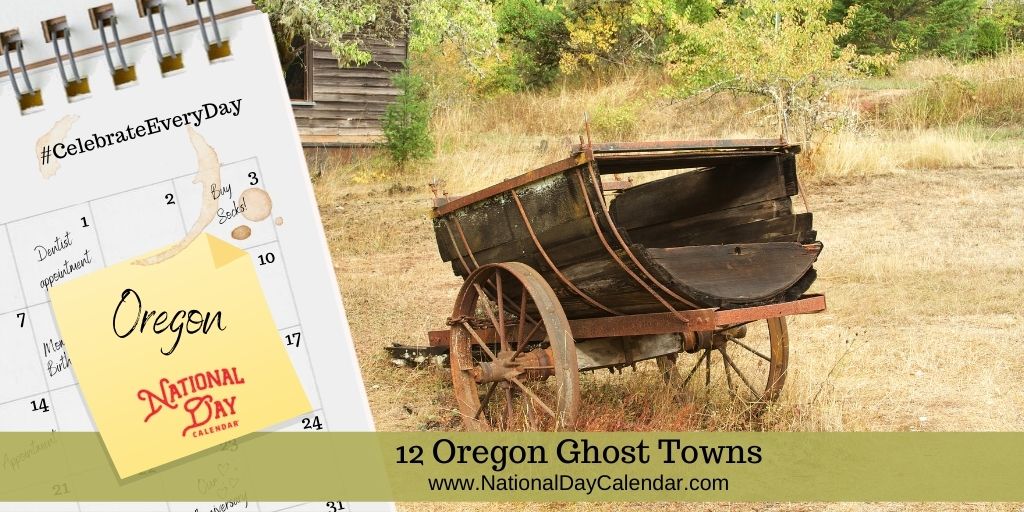 All across the United States, ghost towns draw adventure seekers, history buffs, photographers, and explorers. These 12 Oregon Ghost Towns offer that and more. Keep in mind, this list only scratches the surface of potential ghost town exploration. Why? Because Oregon claims to have more ghost towns than any other.

Ghost towns can be difficult to define. Some are completely deserted, not a single resident remaining and barely a cornerstone to be found. Others have a few lingering residents but most of the buildings in town are vacant. Then there are the ghost towns that thrive on being ghost towns. The small population wears the badge of ghost town proudly and invites people to take a look around. What do all these towns have in common— they were once flourishing communities with schools, post offices, and bustling businesses.

If you long to escape the hustle and bustle of daily life, plan a road trip to explore the ghost towns of Oregon. This list of 12 Oregon Ghost Towns will whet your appetite for exploration!

Located on the banks of the Fifteen Mile Creek, the Boyd post office was established in 1884. Milling operations and the railroad helped the community to grow. However, the growing demand for paved roads across the country resulted in the development of U.S. Route 97, also known as The Dalles-California Highway. This new highway bypassed Boyd in 1923 and led to a dwindling economy and population. The mill and a few other buildings still stand. You can stop at another Oregon ghost town on your way to the next destination called Dufur.

Head south from Boyd and Dufur and find Friend, Oregon, and the last stop on a 41 mile stretch of the Great Southern Railroad which was completed in 1913. A few buildings remain including a church and the post office, but not much else.

Once known as the Wool Capital of the World, Shaniko finds itself on many of the must-see lists of Oregon Ghost Towns. Part of the reason is that it has such an interesting history and standing buildings. Pioneers, gold, and the railroad all influenced Shaniko’s boom-bust cycle. Less than 50 people claim Shaniko as home, mostly rural, and they even maintain some of the buildings including the hotel and the beautiful old school. It was resurrected from ruin in the 1990s. The community also hosts a variety of events throughout the year that draw people from the surrounding area.

Tucked into a little pocket of land on the Middle Fork John Day River, Ritter is known for its hot springs. This little oasis in eastern Oregon was once called McDuffey and also comes with an early scandal that resulted in the town being renamed, Ritter. Visit the quiet location for a restful break and enjoy the scenery and hot springs.

Another Oregon ghost town that tops many lists is the town of Sumpter. Located in the Blue Mountains of eastern Oregon, the logging and mining town of Sumpter was platted in 1898 in the midst of a gold boom. The area hosts guided tours of the Sumpter Valley Dredge, a bed and breakfast, and the Sumpter Valley Railroad with round-trip excursions from Sumpter to McEwen.

This little community began on a stagecoach and railroad line in the mid-1860s providing service to ranchers and miners in the area. While the population of Antelope, Oregon, sits around 50 people today, that wasn’t the case in the 1980s when the town was temporarily renamed Rajneesh, Oregon. At the time, the population began to swell as members of the Rajneesh movement established a commune. The rural area is full of beautiful scenery and several buildings still stand including some from the commune.

The centerpiece of this ghost town in this western Oregon county of Lincoln is the Chitwood Bridge. The quaint covered bridge was built across the Yaquina in 1926. Chitwood is a product of the trading and railway stop along the short-lived and failed Yaquina line of the Oregon Pacific Railroad.

This once-booming mining town in the Blue Mountains started as a town called Cracker. Several buildings still stand in Bourne, evidence of its once, though short-lived, prosperity. Most of the history remaining in many ghost towns can only be found in the whispers of the buildings and cemeteries that remain. However, Bridal Veil is one exception. The former company town has a well-kept history. But it also is home to an operating post office. Why? Well, thanks to the name of the town, many couples planning their wedding send their invitations through the post office simply so it bears the stamp of Bridal Veil. Bridal Veil Lumber Company established the town in 1886. Its company town history continued in 1936 when the Kraft Food Company purchased it and kept it active until the 1980s.

Once a military installation, Fort Stevens is now a state park. There, the park encompasses many historic sites including the Clatsop Village, Guardhouse, West Batteries, and the Central Power Plant. Perhaps one of the most intriguing sites is the remains of the shipwreck Peter Iredale. The ribs of this beached iron ghost ship remain as a marker for what is known as the Graveyard of the Pacific.

This unique ghost town sits in the shadow of its namesake – Fort Rock Valley. The massive rock formation in southern Oregon is known as a tuff ring and is designated a state natural area. The Fort Rock Valley Historical Society has collected buildings from the surrounding area to preserve in one location. Along with them, they preserve the history of the area and its pioneers.

After its heyday as a mining town, the town of Golden saw a short revival in the 1950s when it became the set for several western movies and the television show Bonanza. Since then, it has been designated a State Heritage Site. A few buildings remain, including one of the churches.