While Prohibition in the United States began in 1920 with the Volstad Act, almost 100 years of prohibition history precedes that date. On National Day Calendar, numerous holidays celebrate distilled liquors, beer, wine, and the cocktails they make. Many of them even touch on the years of Prohibition, and one even celebrates the repeal of the legislation. But they don’t dive into the roots of the movements that brought us to Prohibition and its eventual repeal. Here, we highlight 100 Years of Prohibition History. 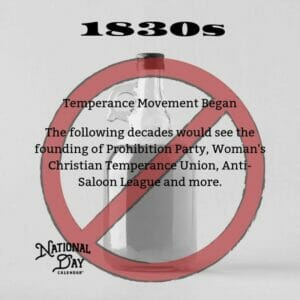 The Temperance Movement began in earnest. While many churches and other local societies urged citizens to take abstinence pledges in the early 1800s, they grew to large numbers by the 1830s. In the decades that followed, smaller church groups formed into larger organizations. According to Alcohol Problems and Solutions, the first was the American Temperance Society, founded by two Presbyterian ministers in 1826. Their membership grew to 1.5 million members by 1835. Many temperance societies discouraged drinking strong spirits but allowed beer and wine.

Tennessee passes the first legislation prohibiting the sale of alcohol. They would later pass more legislation before the Volstad Act was passed. Once federal Prohibition was repealed, Tennessee continued many of its laws prohibiting alcohol. To this day, only ten counties in Tennessee allow the sale of alcohol anywhere in the county, while the remaining counties are either completely dry or individual districts within a county are dry.

Other states soon followed with varying levels of restriction and success. During this time, new states admitted to the Union, did so as dry states.

One of the Temperance Movement’s more enthusiastic activists was Carry Nation. She was notorious for her violent opposition to the sale and consumption of alcohol and smoking. Her destruction of saloons landed her in jail more than once. Before the Volstead Act, formerly the National Prohibition Act, Congress passed the Wartime Prohibition Act. It took effect on June 30, 1919, and banned alcohol sales of beverages with an alcohol content of greater than 1.28%. Just four months later, the Volstead Act passed. President Woodrow Wilson vetoed the act. However, Congress overturned the President’s veto, officially prohibiting the sale of alcohol.

Interestingly, at the time of the passage of both these acts, more than 50% of the states in the country were dry or mostly dry.

The 18th Amendment went into effect on January 17, 1920. It had been introduced to Congress nearly two years before. In between introduction and becoming law, the country had been primed by the Wartime Prohibition Act and the National Prohibition Act as well as numerous state laws. But that didn’t stop people from resisting. Breweries and distilleries went to court for injunctions to prevent any of the legislation from becoming law or to have them declared unconstitutional.

Despite their efforts, the 18th Amendment was ratified just a year after it passed. It made it illegal to produce, transport, or sell alcohol. However, it did not prohibit its consumption. And while alcohol use did decrease, the number of speakeasies in the country by the end of Prohibition can attest that the country did not stop drinking. The speakeasy, gangster, moonshine, bootlegger. These were the terms of the Prohibition era. While some of them existed before the 18th Amendment, they grew in usage during this time frame.

Words weren’t the only changes people saw during Prohibition. The incidence of cirrhosis declined tremendously during Prohibition, as did alcoholism-related deaths. Other positive outcomes from Prohibition included families having more income because workers weren’t spending it at the bar. Absenteeism decreased, and productivity increased in the workplace. And overall, crime decreased, too.

Though a new kind of crime crept into the world and that’s where the usage of the aforementioned words come into play. People didn’t want to give up their right to choose to drink. And while the legislation didn’t prohibit drinking, it sure made it hard to find one. It also significantly reduced tax revenues from alcohol sales.

In 1929, the world changed when Black Tuesday struck. Wall Street took it’s worst hit in a single day and ushered in the Great Depression. It was also the beginning of the end for Prohibition. Tax revenues were already down, and now with people out of work, even fewer taxes were being collected. The economic consequences of Prohibition were piling up. None of the expected boon for other industries ever materialized during the Prohibition era. Tourism moved overseas. With the Great Depression, the political tone was changing. Introduced by Senator Pat Harrison and Representative Thomas H. Cullen, the Cullen Harrison Act amended the Volstead Act by legalizing the sale of beer and wine with low alcohol content. Introduced in early March of 1933, the act moved swiftly through Congress and was signed by President Franklin D. Roosevelt on March 22nd. It went into effect on April 7, 1933. The purpose of the law was to spur brewers, restaurants, and other hospitality businesses to hire.