While hat-wearing has declined since the 1950s and 1960s, humans still like to express their style by wearing one from time to time. Hats still serve a purpose or two beyond fashion— keeping our heads warm, shielding us from the sun. However, historians provide a few reasons why we started going hatless, ranging from improved heating in buildings to a sense of freedom after World War II. No matter the reason, though, a few hats are rooted in hat history thanks to several historical figures or iconic characters. These are our 10 Iconic Hats from Pop Culture:

This wide-brimmed hat with a high, dented crown became immensely popular in the 1920s with both men and women alike. Of course, the Fedora is as noted as the people who wore them, too.

Similar in style to the Fedora, the Trilby has a narrower brim. Judy Garland wore one in Summer Stock. 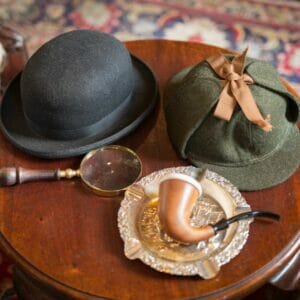 This hat is almost synonymous with Sherlock Holmes. Though author Sir Arthur Conan Doyle never uses the word “deerstalker” to describe Holmes’ headgear in the books, he does describe a close-fitting traveling cap with ear flaps. The description fits the deerstalker quite well. Another notable fictional character who wore a deerstalker is Professor Minerva McGonagall, played by Maggie Smith in the Harry Potter series. Her witchy little plaid deerstalker added a touch of fashion to the stern but compassionate Hogwarts teacher. This hat is so named because it resembles a savory dish called a pork pie. Its flat top and narrow brim make it immediately recognizable. They were often adorned with a ribbon or feathers. Gene Hackman wore one back in 1971’s The French Connection. More recently, the hat has gained the nickname The Heisenberg thanks to the series Breaking Bad. Walter White, played by Bryan Cranston, dons the hat in season 1 and uses the pseudonym Heisenberg in his rise as a drug kingpin. The porkpie is also the hat of choice for Peaky Blinder’s character Alfie Solomons played by Tom Hardy.

4. The Witch or Wizard Hat

We can’t make a list about hats and ignore any of the many famous witches and wizards of filmdom. From the Wicked Witch of the West, played by Margaret Hamilton in The Wizard of Oz, to Gandalf, played by Ian McKellen in The Lord the Rings, these witches and wizards are unforgettable in their pointy hats. In the Harry Potter series, this hat style even plays its own role as the Sorting Hat voiced by Leslie Phillips.

If you grew up looking for a man named Waldo in picture books, that might have been your first pop culture beanie. The Where’s Waldo books illustrated by Martin Hanford feature a world-traveling character named Waldo (Wally in the United Kingdom), who wears a red and white beanie and blends in with his surroundings. However, long before Waldo, Spanky McFarland wore a beanie in the Little Rascals series. Steve Zissou (played by Bill Murray) and crew sport red beanies in 2004’s Life Aquatic. Perhaps the most interesting use of the beanie in a production is when the character Hercules Mulligan (played by Okieriete Ondowan) wears one in Hamilton. The beanie is notably not a style worn in the 18th century, and yet Ondowan wears it believably and makes the role his own.

You might also know the bowler as the derby hat. Its domed crown and curled brim was created by hat makers Thomas and William Bowler to replace top hats worn by gamekeepers. The hat sat firmly on the head and protected the wearer from low-hanging branches. In the 20th century, Charlie Chaplin ingrained the style into our memories with his comedic slapstick. Other noted bowler wearers include Diane Keaton in Annie Hall and Malcolm McDowell in The Clockwork Orange. 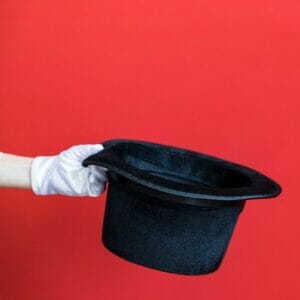 The top hat made a noisy appearance in 1797 when haberdasher John Hetherington wore it for the first time. It caused such a stir, Hetherington was brought into court. However, the top hat recovered to become a popular headpiece for generations of people. Some notable figures include Josephine Baker, the Mad Hatter, Willie Wonka, the Cat in the Hat, and the 14th President of the United States, Abraham Lincoln. Not only did the President wear a top hat, he later made a similar hat famous— the Stovepipe Hat, a taller version of the top hat.

This nifty little hat fits the head snuggly with a wide brim usually angled downward. The skipper’s first mate on Gilligan’s Island wore one, protecting his head from the blazing sun on that deserted island. Burgess Meridith also wore one in the film Grumpy Old Men. In recent years, LL Cool J has brought back the hat as a fashion statement.

Another presidential favorite in the hat world, the Panama, was worn by Theodore Roosevelt, Sean Connery, and Robert Redford.

A modern version of the baseball cap, the snapback cap debuted in 1954 and was designed by Harold Koch. The flat-brimmed hat became popular with hip-hop artists in the 1980s. Will Smith as the Fresh Prince of Bel-Air, Run DMC, Tupac Shakur, and Jay-Z are just a few artists who made this style fashionable. Today, snapback caps are some of the most popular hats worn.