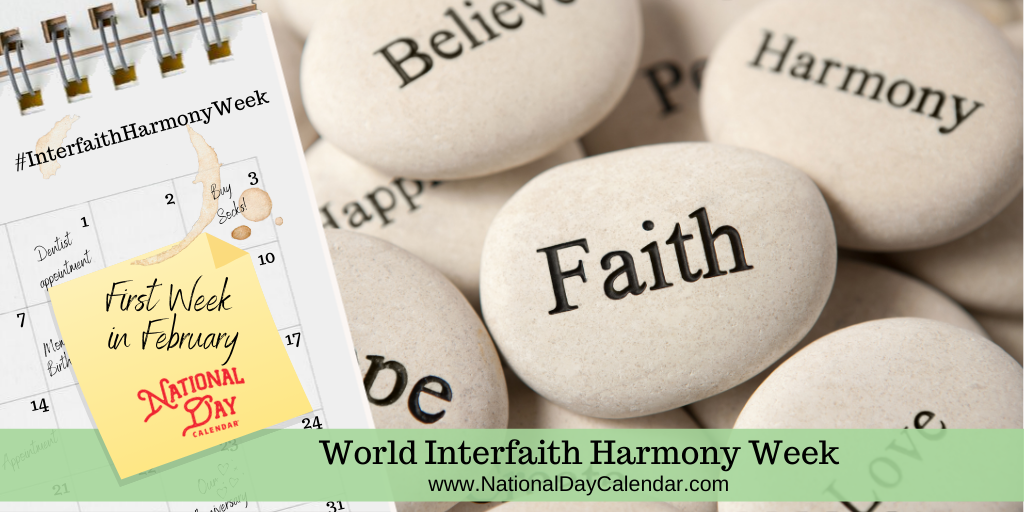 Every year during the first week in February, World Interfaith Harmony Week promotes unity among people regardless of their religious beliefs.

Many see religion as something that separates people. One reason for this is the many different religions and faiths throughout the world. According to recent statistics, the world recognizes over 4,000 religions.

We best define religion as a system of beliefs and practices that usually centers around a superhuman controlling power. Some people use the words “religion” and “faith” interchangeably. When one has a particular faith, they worship a personal God or gods. For most, faith has transcendental and spiritual elements. Many people describe their faith as something that has transforming power. Faith often inspires its followers to become better people.

Achieving harmony amongst the different faiths requires a mutual understanding and interreligious dialogue. Focusing on similarities instead of differences also helps foster unity. For example, almost all world religions have a sense of community. The different religions also try to answer big questions, such as, “what is my purpose in life?” In addition, most religions have in common the idea of a golden rule that says to treat others as you wish to be treated. Forgiveness, gratitude, love, compassion, prayer, and peace are also elements that many faiths have in common.

HOW TO OBSERVE #InterfaithHarmonyWeek

Every year during this week, people of faith host various events to foster harmony. Some of these events include educational seminars, interfaith worship services, prayer vigils, movie screenings, and community art projects. In addition, organizations are encouraged to create their own events that promote interfaith harmony. Each year the King of Jordan awards monetary prizes to the organizers for the best events.

To participate in this week:

Spread awareness for this week on social media with #InterfaithHarmonyWeek

In 2010, King Abdullah II of Jordan proposed to the United Nations a weeklong event that would promote a culture of peace and nonviolence. The UN General Assembly adopted the proposal and declared the first week in February as World Interfaith Harmony Week.