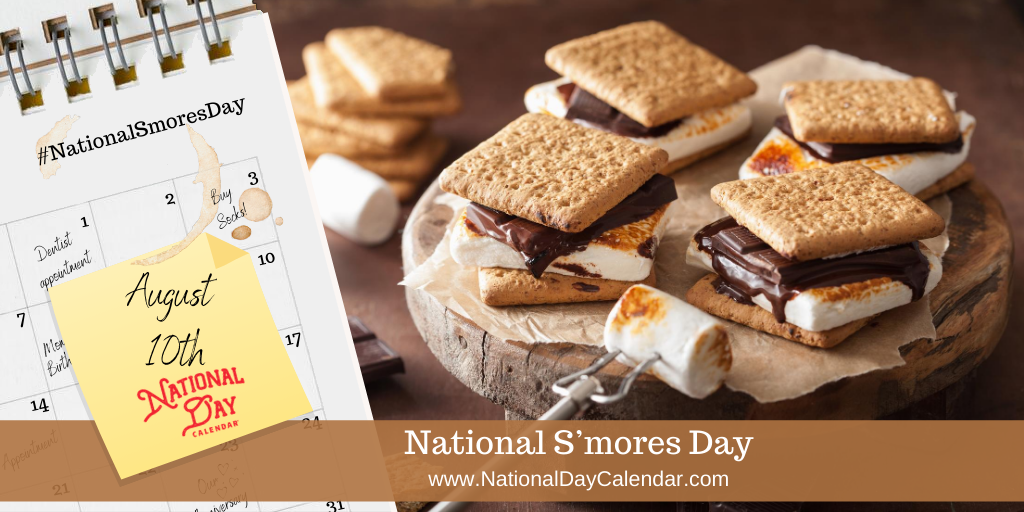 National S’mores Day on August 10th recognizes the most popular campfire treat! Millions of people of all ages love this gooey, toasted treat.

S’mores consists of a roasted marshmallow with a layer of chocolate bar sandwiched between two pieces of graham cracker.

The origin of this tasty snack is credited to the entrepreneur Alec Barnum. However, the first recorded version of the recipe can be found in the 1927 publication of Tramping and Trailing with the Girl Scouts.  Even though the Girl Scouts were not the first ones to make s’mores, Girl Scout groups describe them in their reports as early as 1925. Earlier recipes used the name “Some Mores.”  It is unclear when the word “S’mores” became the more common name.

Today, many variations on the original s’more find their way around a campfire.

Try this S’more Bar recipe at home. Enjoy and share with your friends and family. However, if you think s’mores are too messy for you but enjoy the flavor, add the s’more ingredients to delicious desserts. Cakes, pies, dips, trifles also offer a terrific way to enjoy the taste of a s’more.

How many different ways can you make a s’more? Use #NationalSmoresDay to post on social media.

July 10th Celebrated (and Not So Celebrated) History

Composer Wolfgang Amadeus Mozart completes the chamber piece “Eine kleine Nachtmusik” (A Little Serenade). As one of his most popular works, the composition wasn’t published until after his death.

The Paris museum now known as the Grand Louvre opened in the former royal palace.

The state known as the gateway to the West joins the Union as the 24th state.

President Franklin D. Roosevelt is stricken with a paralytic illness at the family’s summer home on the Canadian island of Campobello. While doctors diagnosed the President with poliomyelitis, doctors today believe the cause of Roosevelt’s condition may have been a rare condition called Guillain–Barré syndrome.

The U.S. Treasury discontinues circulation of the $2. The design included the image of President Thomas Jefferson on one side and his Monticello estate on the other. In 1976, they reintroduced the bill as a Federal Reserve Note.

During the Perseid meteor shower, one fireball streaked across the sky during daylight hours. Visible from Utah to Canada, the fiery ball caused numerous calls to the FAA. It is the only known case of a meteor entering the Earth’s atmosphere and then leaving it again.

Michael Jackson completes the deal to purchase ATV Music, including the catalog of Beatles songs, for $47 million.

Magellan enters orbit around Venus and begins mapping its surface.

The United Kingdom tops 100°F for the first time in recorded history.

July 10th Celebrated (and Not So Celebrated) Birthdays

As a pharmacist, Nestlé had the training and understanding to experiment with products. Before becoming a chocolatier, he created milk products for infants. Today, his brand is one of the most recognizable around the world.

As a Southern author who lived through the Civil War, Andrews offers a glimpse into the world of women in the south after the war. She also was a recognized botanist. Some of her books include A Family Secret, The Wartime Journal of a Georgia Girl and A Practical Course in Botany.

The pilot of the Graf Zeppelin, Eckener would set records around the world with the lighter-than-air-ship.

Serving as the 31st President of the United States, Hoover took office at the beginning of the Great Depression.

Best known for his role as the Tin Man in the Wizard of Oz, Haley began his career as a vaudeville actor.

The musical innovator, Leo Fender, didn’t even play guitar. However, his name and brand continue to influence the electric guitar world, today.

Born John Kelly Lewis, he played for the Washington Senators for 14 years. The third baseman and right fielder made two All-Star appearances during his career.

The talented country singer and actor would also launch a brand of sausage enjoyed by millions.

Best known for his role as Abe Carver on Days of Our Lives. He was cast in the role in 1981 and has played it ever since.

Children and young adult author, Michael Gerard Bauer, began his career as a teacher. He published his first book, Running Man, in 2004.

The Spanish actor made is American debut in the film The Mambo Kings in 1992. Since then his roles have brought him international attention.

Best known for The Hunger Games series, the author began her career writing for children’s television.

As a first round draft pick for the Detroit Pistons in 2012, Drummond went on to play center for the Cleveland Cavaliers.