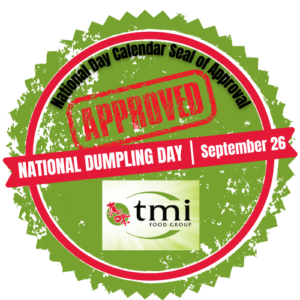 TMI Food Group submitted National Dumpling Day in April 2015 to celebrate all the goodness of dumplings.

In May 2015, the Registrar at National Day Calendar® proclaimed that National Dumpling Day to be held on September 26th, annually.

Brothers Joseph and Terry Tang founded TMI Food Group, a minority-owned business, in 1989. For over 20 years, the Tang Family’s hard work ensures the products they offer are of the highest quality and health standards. With its straightforward mission “To make people happy” and vision “To be part of every family’s meals,” TMI Food Group always has and will continue to devote itself to the production of delicious and healthy foods.

Since its inception as Twin Marquis, a small-scale noodle factory in Chinatown, TMI Food Group has experienced exponential growth over the years. Its current facilities operate on over 130,000 square feet of production space. Their repertoire expanded beyond noodles and wrappers to include dim sum, appetizers, and dumplings. TMI Food Group is the parent company of subsidiaries Twin Marquis Inc., Chef One Corp., and TMI Trading Corp.

In 2007, TMI Food Group became the first manufacturer of Asian food products in the United States to receive an ISO 22000:2005 certification, an international standard of food safety. The certification was a testament to the company’s dedication to its consumers, taking into consideration all aspects of food production, from research and development to the distribution of its products. Subsidiary brands Chef One Corp. and Twin Marquis Inc. are also HACCP certified.