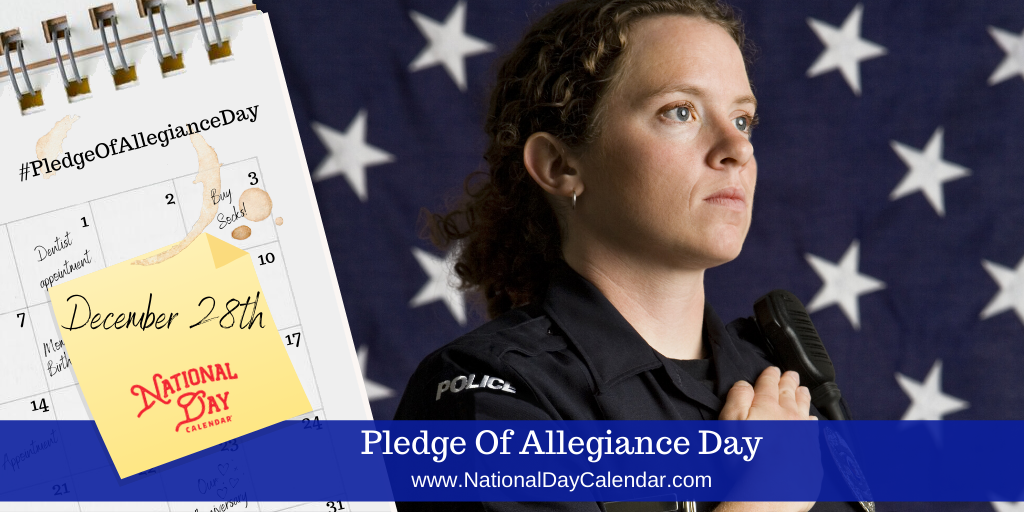 Pledge of Allegiance Day on December 28th commemorates the date Congress adopted the “The Pledge” into the United States Flag Code.

Congress formally gave recognition for the Pledge of Allegiance on December 28, 1945. Francis Bellamy receives credit for writing the Pledge of Allegiance. The Youth’s Companion, a magazine for young people, first published it anonymously on September 8, 1892, under the title “The Pledge.” It was written in celebration of the 400th anniversary of the discovery of America.

In 1923 and 1924, the National Flag Conference inserted text of the pledge into legislation. Though modifications were made, the pledge remained nearly the same. At the same time, the conference didn’t designate it as the official pledge. In its original form, it read:

“I pledge allegiance to my Flag and the Republic for which it stands, one nation, indivisible, with liberty and justice for all.”

The small changes resulted in this version:

“I pledge allegiance to the Flag of the United States of America and to the Republic for which it stands, one nation, indivisible, with liberty and justice for all.”

On Flag Day in 1954, Congress added the words “under God” in response to the anti-Communist opinion sweeping the country during the Cold War.

Learn more about the Pledge of Allegiance, its history and what it means. Recite the pledge. Use #PledgeOfAllegianceDay to post on social media.

Over the years, various attempts to create a national day honoring the Pledge of Allegiance have reached Congress. Others have failed. Around the country, Pledge Days, large and small, focused on the history of the pledge, the flag, and the Nation as a whole. We recount some of those efforts below. Interestingly, none of the exercises in patriotism point to a holiday taking place on December 28th.

In the 1970s, a movement took root aimed to set Pledge of Allegiance Day on April 30th. The significance of the date points to President George Washington’s inauguration on April 30, 1789. The third-grade students and their teacher, Mrs. Priore from Cleveland Hill School in Cheektowaga, NY, launched the campaign. Their campaign gained some ground with editorials and articles published across the country. However, their efforts never resulted in any continuing observance.

In 1982, Congress received a submission for National Pledge of Allegiance Day, but they took no action.

That same decade, the House reviewed a Joint Resolution to designate September 8, 1988, as Francis Bellamy Pledge of Allegiance Day. While they referred the document to the Post Office and Civil Service Committee for review, no further action resulted.

December 28th Celebrated (and Not So Celebrated) History

The U.S. Patent Office issued patent No. 98,304 to William Finley Semple of Mount Vernon, Ohio for chewing gum. However, the first person to commercially produce chewing gum was John B. Curtis of Maine.

The U.S. Patent Office issued patent No. 355,139 to Josephine Garis Cochran for her invention of the “dish washing” machine. She is the first inventor to successfully produce a commercially marketable dishwasher. The inventor soon established the Cochran’s Crescent Washing Machine Company. In later years, the company would become part of KitchenAid.

Elizabeth Jordan Carr was born at Norfolk General Hospital. She was the first American baby conceived using in vitro fertilization.

December 28th Celebrated (and Not So Celebrated) Birthdays

The 28th President of the United States saw the country through World War I and established his Fourteen Points to guide the nation into peace. His efforts following the war earned Wilson the 1919 Nobel Prize for Peace.

The comic-book writer and editor became the executive vice president and publisher of Marvel Comics in the 1970s. Throughout Lee’s career, he created some of the comic-book world’s most iconic characters including Spiderman, Hulk, Doctor Strange and Black Panther.

The award-winning actress of stage and film began her career in 1956. Since then, Smith has developed a considerable portfolio of work. The English actress is most recently recognized for her roles in the Harry Potter films and the Downton Abbey television series.

The Nobel Prize-winning chemist is recognized for inventing the polymerase chain reaction (PCR) technique that is used to replicate and analyze DNA rapidly.

In 1991, the programmer developed the operating system known as Linux.

The award-winning singer-songwriter rose to stardom with his 2004 debut album, Get Lifted.