Biologic coordinators are some of the most important advocates for patients in healthcare—yet too often, their work goes unrecognized. That’s why, on November 1, National Biologic Coordinators Day will recognize the daily commitment of biologic coordinators everywhere. Read more…

On November 1, millions of people celebrate authors and the books that they write on National Author’s Day. Read more…

Families gather around to observe National Family Literacy Day on November 1st. Families who read together succeed together.  Read more… The holiday season warms up with National Cinnamon Day on November 1st. It’s the spice that ushers in a season while being versatile all year long.

National Brush Day on November 1st reminds us all to follow the American Dental Association’s guidelines. Sometimes the day is referred to as Brush Your Teeth Day. Read more… 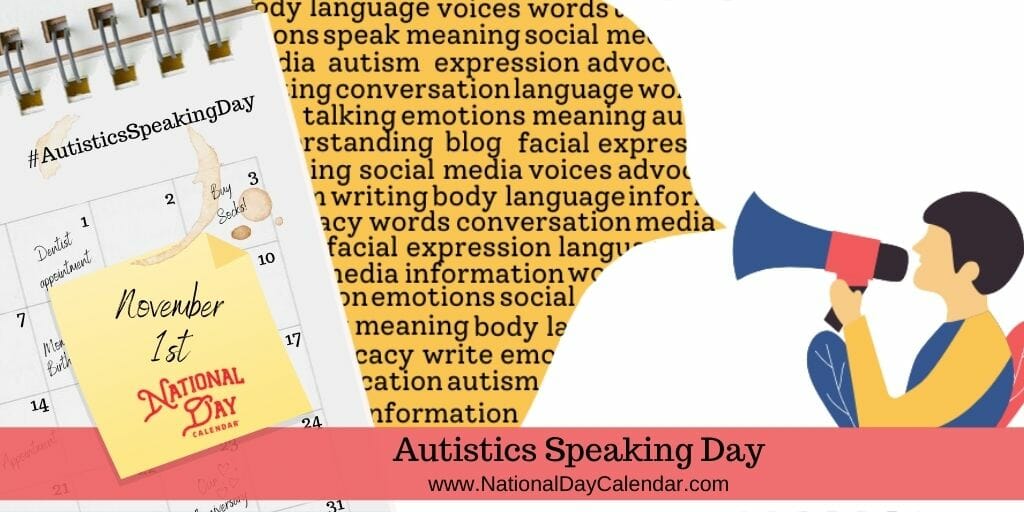 We all look at the world in our own unique ways. However, people with autism experience the world differently from most of us. They approach the world in often novel ways. Maybe one of the most important ways we all connect to and understand the world is through communication. Autistics Speaking Day on November 1 encourages autistic people to tell their stories using whatever means works for them. And everyone else is encouraged to listen, hear, read, and comprehend their stories from their point of view. Read more…

NATIONAL COOK FOR YOUR PETS DAY

November 1st celebrates National Cook For Your Pets Day. This national holiday encourages cooking something for the pet companion in your life. Read more…

If the air is resplendent with the aroma of garlic and tomato sauce on November 1st, it might just be time to celebrate National Calzone Day.

Job Action Day on the first Monday in November redefines the opportunities in the career world. Celebrate by exploring your options. Read more…

Advertisement
On Deck for November 2, 2021

November 1st Celebrated (And Not So Celebrated) History

The first known performance of Shakespeare’s tragedy, Othello, is at Whitehall Palace in London.

President John Adams moves into the now completed Executive Mansion. He is the first president to reside in the Nation’s house that would later be named the White House.

Boston Female Medical College opens. It is the first medical school for women. In 1873, the school would merge with Boston University.

The first building of the Library of Congress opens to the public. As imagined by Librarian of Congress Ainsworth Spofford, an elaborate dome tops the grand, circular reading room. Today, the library catalogs more than 170 million items.

The Mackinac Bridge opens to traffic. Connecting Michigan’s Lower and Upper Peninsulas, the five-mile bridge is the longest suspension bridge at the time. In a small mixing bowl, add the zest and juice of one lime. Add honey, mustard, and olive oil. Add salt to taste. Mix well.

Advertisement
November 1st Celebrated (And Not So Celebrated) Birthdays

The 11th Dalai Lama of Tibet was recognized in 1840. In 1855, at the age of 17, he assumed his role as the spiritual leader of the Tibetan people. He died unexpectedly 10 months later.

While the author’s best-known work is the Civil War classic The Red Badge of Courage, he was also a poet.

The blues and jazz singer-songwriter became known as “The Texas Nightingale.” Throughout her career, she performed with Louis Armstrong, Perry Bradford, and even a young Bonnie Raitt. She recorded over 40 songs including “I Feel Good,” “Second Hand Blues,” and “You Got to Know How.”

The artist left several legacies in her wake, beyond her art itself. Active in her community, she co-founded the DuSable Museum of African American History, helped establish the South Side Community Art Center in Chicago, and developed the Chicago’s Lake Meadows Art Fair.

In the 1980s, the American singer-songwriter rose to prominence on the country music charts. He is also an actor and record producer.