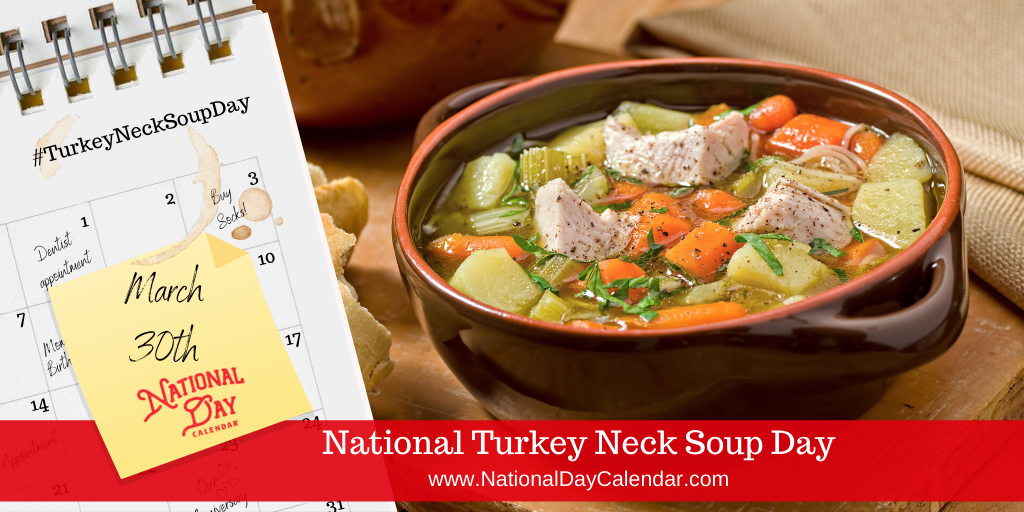 On March 30th, National Turkey Neck Soup Day challenges cooks to make a flavorful soup with the stock made from the neck of a turkey.

The best and most delicious way to make turkey neck soup is by making homemade stock. You’ll need a whole turkey plus onions, carrots, celery, herbs, and other seasonings. All the ingredients will be added to a stockpot and covered with water and brought to a simmer.

You can purchase turkey necks separately from your butcher or your grocer. Don’t forget to check the freezer section! A variety of turkey neck soup recipes allow extra vegetables or rice, too. You can also make the soup heartier by adding beans. Consider a 15 bean soup with your pressure cooker.

Our research was unable to find the origin and the creator of this food holiday.

March 30th Celebrated (and Not So Celebrated) History

The United States Patent Office issued the first patent for an eraser attached to the end of a pencil to inventor Hymen Lipman.

Secretary of State William Seward agreed to purchase Alaska from Russia for 7.2 million dollars. The final agreement didn’t take place until October, but it would become known as Seward’s Folly. Congress and the press didn’t see any value in the purchase of a frozen wasteland. Even the chef at Delmonico’s in New York poked fun at the Secretary of State and created a dessert in honor of the potential event. Seward would die in 1872, more than two decades before the Alaska Gold Rush and well before Alaska was seen for its more strategic and natural benefits.

President Ulysses S. Grant announces to Congress that the 15th Amendment prohibiting the federal government and states from denying the right to vote to any citizen based on a person’s “race, color, or previous condition of servitude,” is in effect. The states ratified the amendment on February 3, 1870, granting African American men the right to vote.

Jeopardy! Categories for $200, Alex. Following National Day Calendar will help you answer many questions in this popular category. “What is National Days?” Hosted by Art Flemming, the game show Jeopardy! debuts on NBC. The Merv Griffin creation broadcast until January 3, 1975. Following syndication, it was revived as the short-lived The All-New Jeopardy! In 1984, it once more made a revival and is still going strong. On November 8, 2020, the show’s beloved host, Alex Trebek died from pancreatic cancer. He hosted the show for 37 years.

March 30th Celebrated (and Not So Celebrated) Birthdays

While the author wrote several books during her career, she’s best known for the novel Black Beauty.

The Dutch post-impressionist painter brought the world some of the most influential oil paintings. Included in his collected works are “The Starry Night,” “Water Lily,” and “Sunflowers.”

In 1896, after completing all the requirements, Calkins was denied a doctorate degree in psychology from Harvard University solely on the basis of her gender. She became the first female president of the American Psychology Association in 1905.

The American engineer is best known for developing the Jeep.

The award-winning music artist is best known for his guitar rock and blues performances. A career spanning five decades, from 1970s hits “I Shot the Sheriff” and “Wonderful Tonight” to the 1990s “Tears in Heaven,” Clapton’s powerful lyrics and guitar solos have moved the world.

We can’t touch this, but you can. Born Stanley Kirk Burrell, the award-winning American rapper, dancer, and producer rose in popularity during the late 1980s with hits like “U Can’t Touch This” and “2 Legit 2 Quit.”

March 30th must be in the stars for music with the third artist born on this day. In 1988, Tracy Chapman’s career exploded with three Grammy wins – Best New Artist, Best Pop Vocal Performance, and Best Contemporary Folk Recording. She added another Grammy win in 1996.

Adding one more musically talented artist, the Canadian singer’s four decades of powerful ballads and moving pop songs have garnered her 16 Grammy nominations and 5 wins. While her first Grammy win in 1992 was for her duet of “Beauty and the Beast” with Bryson, her first album was released in French.